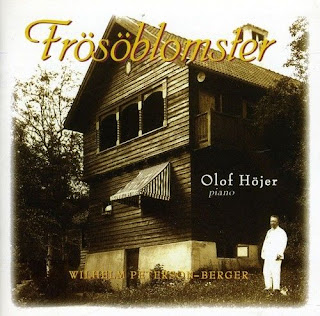 Gloomy outside, in this unending winter, but summer inside with Wilhelm Peterson-Berger, Frösöblomster Book I, II and III with Olof Höjer, in the recording made in 1990 at the Malmö School of Music where Höjer (born 1934) taught at the time, and released soon after by The Swedish Society, who also issued the complete piano works of Peterson-Berger in four other volumes, also with Olof Höjer.  Pretty much definitive ! Though Frösöblomster is so well known,  there are few other recordings that come close.  The cover photo shows Peterson-Berger in his old age, with his beloved cat Kurre, outside his home "Sommerhagen", on the island of Frösön, by the shore of the Lake Storsjorn in the Jämtland. Peterson-Berger is wearing a white summer suit, making the most of the northern summer.  His home is simple, built to withstand harsh winters.

This context is relevant for the spirit of the island impacts on the music in Frösöblomster.  Nationalism in music is a dangerous game to play, because stereotypes are for shallow thinkers. But when Peterson-Berger was writing in the 1890's, composers all over Europe were finding their own identities in music, and in doing so, created music that went on to shape cultural heritage. The  "Nordic Light" that shaped Scandinavian art, music and literature has a clarity and ruggedness that reflects natural, surroundings - think light on snow, vast open spaces, clean waters - yet technical artistic standards are paramount.  Frösöblomster  might seem simple but it takes great skill to write with such lyrical purity.

Peterson-Berger ciompleted Frösöblomster Book I in 1896, before he turned 30.  Thus the exuberance of Rentrée and its skipping rhythms.  Sommersäng is perhaps the best known Peterson-Berger piece of all; it positively glows.  Höjer's playing brings out its expansive warmth, as if the piano were a conduit for summer breezes and sunshine.  In Lawn Tennis, the line bounces back and forth with energy. Even if you didn't know the title, you'd recognize the form. Not for nothing the langorous Till rosorna is followed by Gratulation, a brisk gavotte.  Höjer's pedal bending and "dipping" with good humour.  In Vid Frösö kyrka we return to something more enduring than dance. The solemn melody is hymn-like and austere : the reference is to the Old Church in Frösö which stood for 800 years til, it burned down two years after Peterson-Berger immortalized it in song.  This adds a tinge  of sadness for us today, though at the time the composer was writing, he wasn't to know.  This colours I skymningen (Dusk) and Hälsning (Greeting), though Peterson-Berger probably paired them to suggest the passage of time, which is perfectly appropriate.

Frösöblomster Book I was a huge success, making Peterson-Berger's name as a musician.  In Frösöblomster Book II, completed just four years later, "considerably less public oriented", as Höjer states in his notes  Nonethelss it is a very fine work of maturity. With Solhälsning (Sun Greeting) it commences  "in a most radiant C major with a polonaise of almost orchestral power". The two following works Jämtland and Längt hort skogarna (Far away in the Forest), Vågor mot stranden (waves on the beach) and Minnen (Memories) are miniature tone poems.  More abstract but even more impressive, Vid Larsmäss (On St Laurentius's Day), at once sophisticated and deceptively innocent.

Frösöblomster Book III appeared fourteen years after Frösöblomster Book II, during which time Peterson-Berger wrote his major symphonies and operas, and left town to live permanently on Frösön.  The new volume  represents his  "striving towards 'simplicity, ' toward 'the rugged material beauty of the grey primeval rocks'  has borne rich fruit", says Höjer, quoting the composer himself, writing in 1915.  The pieces in this volume  take their cue from the landscape, but connect to a more abstract landscape of inner emotion.  In Förspel (Prelude), the mood is expansive, not unlike Rentrée, but this time the rhythms are more assertive. Peterson-Berger isn't going on holiday, he's going to his spiritual home, literally, Intäg i Sommerhagen.  Perhaps we can hear echoes of the past, but also, in Landskap i aftensol (Landscape in the afternoon sun) a sense of contentment, and perhaps wry good humour, if Folkhumor is any guide. Vild marken lockar (theWilderness calls) is powerful, like a rockface from which one might gaze into the distance.  At Frösön lies the northernmost Viking Rune stone : thence forward, wilderness. Under asparna (Under the Aspens) is a gentle idyll, before the reflective Om mäng är (In many years).  In 1914, Peterson-Berger was 49, not old by the standards of the time, but he had a lot to look back on.  Whatever Frösöblomster Book III may represent, it is as much a metaphor for the blossoming of life as it is a portrait of the flowers of Frösön.
at April 09, 2018