A Ladin Saint in Imperial China

From Abtei (now Badia) one of the five Ladin speaking communes in the Gardetal (now Val Badia), in South Tirol, to villages in China, Joseph Freinademetz, (1852-1908), canonized as a Saint in 2003. In 1879, he left Europe for Sai Kung, a fishing and farming community that was then part of Imperial China.  Many in the region never really took kindly to being handed over as part of a scramble for control by European countries after China was weakened in the first Sino-Japanese war. Another connection between the Südtirol and South China!  St. Joseph Freinademetz is still an example for the modern world, now rapidly disintegrating into racism and hysteria. But a true Christian should believe that all men are equal in the eyes of God. “The only language that everyone understands is the language of love” he wrote. "I love China and the Chinese. I want to die among them and be laid to rest among them.....In heaven I will be a Chinese.” In 1880, Father Freinademetz was sent to a much larger mission in Shandong (where this photo may have been taken), where he died, twenty eight years later, of typhus, in January 1908.

Sai Kung was no backwater, even in the 19th century. The fishing community had links with other villages around Mirs Bay, further to the north, where Catholic missions were active from fairly early on.  To quote Catholic Heritage in Hong Kong "In 1864, the PIME priests, particularly Fr. S Volonteri and Fr. G Origo came along and started their evangelization and pasturing services amongst the locals. In 1866, 7 villagers were baptized in autumn by Fr. G Origo, while 33 members of the Chan family were baptized in Christmas by Fr. S Volonteri . Local Catholics donated a vacant site for construction of a chapel and school, dedicated to St. Joseph as their patron. In 1875, the villagers on the entire island were baptized".... "There were also three other active religious communities in Sai Kung during the same period, namely in Tai Long Wan, Che Kang and Shum Chung. Priests used to visit farmers and fishermen staying in remote village clusters to promote catholic faith and pastoral work." Father Freiandemetz regularly said Mass in Yim Tim Tsai, travelling by sampan or small junk.  He is commemorated in a statue in the parish church of St. Joseph's, (named after his patron saint) completed in 1890.  Though most of the villagers moved to the city or emigrated abroad (mostly to Ireland), its heritage is being preserved by the former villagers and the government. The Church is now a place of pilgrimage for Chinese Catholics. There are strict controls over building and restoration, to preserve as much of its former character. The saltpans, which gave the village its name still produce salt, sold as souvenirs. 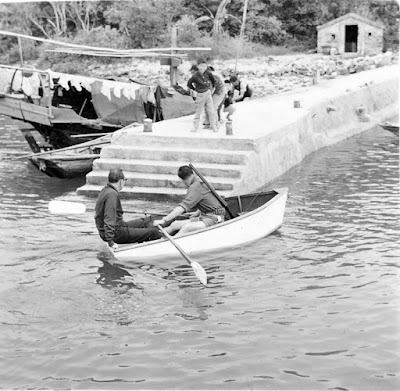 Yim Tim Tsai played a role in my own life.  My father used to hike in the area, and built his own boat in our backyard in the 1950's so he could explore the area by sea. It's now a UNESCO designated Geopark, with unique geological formations, basalt cliffs and strangely shaped rocks, many of which you can't reach by walking and are too enlosed for larger vessels to approach.  when we were kids, we took it all for granted. We assumed all families snorkelled in coral reefs and kept live coral at home. Streng verboten today ! We used to visit Yim Tsim Tsai all the time. While my dad and uncle talked to the village elders, we'd play with the kids and dogs.  My uncle, who spoke Hakka,  told me that there was some connection too between the village and his father, who owned a boat (seized from the German Navy in 1914) and knew the area well.  By that time, a permanent priest was lived in the village. In this photo, taken early 1970, my Dad is rowing to the island with his eldest brother. Photo by fifth brother on a bigger boat.  My Dad used to go shooting pigeons in the woods that cover the hills on the island. He used to make the traditional Macau dish, game pie.  He's taking his brother, to go look. Notice the kids who know who they are, esp. the kid grinning !  Where is he now ? And notice what might be nappies on the small junk, which looks lived in. The pier is still there, modernized but recognizably the same.
at February 29, 2020

A fascinating story. The dedication of these priests and the response they received from people in the villages is inspiring. Thank you for sharing.