On the centenary of the discovery of the theremin by Léon Theremin (1896-1993) Kalevi Aho's Acht Jahreszeiten, (Eight Seasons)  Concerto for Theremin and Chamber Orchestra (2011), with dedicatee Carolina Eyck and John Storgårds conducting the Lapland Chamber Orchestra.  Nothing movie-music spooky here ! Aho brings out the full musical potential of the instrument, and its unique "singing" qualities.  With a range of seven octaves it can reach beyond human capacity : Aho's Concerto combines the theremin with wordless vocalise, the soloist projecting into the air which the players maniulates and shapes with her hands to create patterns of sound.  The result is a fascinating blend of human and non-human, an important consideration given that the piece connects to the shamanistic beliefs of the Sami people of the Arctic circle. That's also relevant since the theremin is not played by touch, but shaped by moving the flow of air. Pitch is determined by the distance and movement of hands, and is extremely difficult to control. Thus the use of sliding glissando, and sudden silences, created by hands held close to the right frequency antenna.  Carolina Eyck, ,like her mentor, Clara Rockmore, developed new fingering techniques which help find the right starting pitch, allowing wider leaps between intervals and "trembling" vibrato.  "My Theremin Concerto", writes Aho, "always contains clear pitches or tonal anchor points  that the player can rely on". 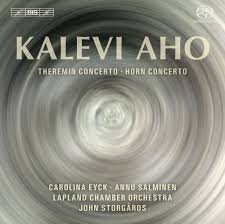 The subtitle "the Eight Seasons" refers to the seasons as experienced in the arctic circle, where winters are long and harsh. People living in close harmony with Nature are much more sensitive to subtle changes, if only for survival, and are much more alert to the elemental forces around them. Thus "Harvest", still warmth but growing cold, to "Autumn Colours", to "Black Snow, to "Christmas Darkness", to the storms of "Winter Frost","Crushed Snow", and "Eisschelmeze", the Melting of Ice in very early Spring,  and the brief magic of the "Midnight Sun".  At times, the theremin makes swooping sounds that might suggest the migration of birds, or turbulence in the upper atmosphere, images as invisible as the air with which the instrument operates. Sometimes violin answer, sometimes hushed winds, reinforcing the idea of human response to the forces of nature. Eyck's wordless vocalise adds mystery, especially in "Christmas Darkness" with its sense of wonderous contemplation.  In "Winter Frost" a storm blows up the theremin in its element, wailing and switching directions with wild exuberance, then grardually subsiding.  In harsh climates the first signs of spring are heard before they can be seen,often in the cracking of ice and the flow of streams beneath the snow. Thus the magical personality of "The melting of the ice",the theremein singing gaily.  In "The Midnight Sun", the piece ends in E flat,  just as the cycle began with in "Harvest", reinforcing the concept of seasons as part of a cycle of Nature which lasts eternally.

The same disc also contains Kalevi Aho's Concerto for Horn and Chamber Orchestra (2011) with soloist Annu Salminen.  Here the soloist moves to different points in the performance space, creating a sense of spatial openness.  It' very good, but Aho's Theremin Concerto steals the show with its sheer beauty and originality !