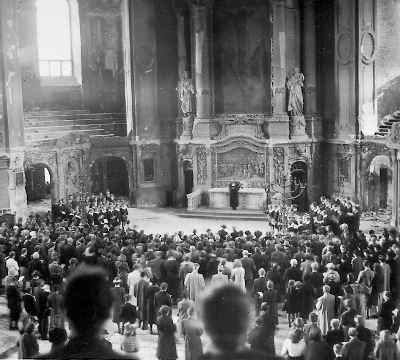 Dresden Kreuzchor in the ruins of the Kreuzkirche, August 1945 (Bundesarchiv)

As dawn broke seventy-five years ago, the people of the City of Dresden woke to scenes of unimaginable destruction.  On 13th-15th February 1945, 1300 British and American bombers unleashed some 4000 tons of incendiary bombs on the City of Dresden.  Tens of thousands were killed outright, hundred of thousands more displaced, their lives changed forever.  Though the city was a transport hub, its destruction wasn't simply strategic. Its annihilation was symbolic. Saxony represented German culture at its finest, not just Dresden alone but Leipzig, Meissen, and the  wider region. Architectural treasures, literature, history and music. Ultimately it wasn't just Dresden that suffered but world heritage. Heinrich Schütz (1585-1672) was a Dresdner, during the Thirty Years War, protected by the Court of Saxony.  Bach lived and worked in Leipzig : not for nothing that he was championed by Mendelssohn, who conducted the Leipzig Gewandhaus Orchestra and by Robert Schumann, born in Zwickau.  Wagner was born in Leipzig and found early fame in Dresden. Richard Strauss was remembering the opera house and the Staatskapelle Dresden in his Metamorphosen. Many things we should not forget, but we remebering Dresden makes us value so much of what has been lost, not to be retrieved.

The number of first hand witnesses is shrinking fast. Peter Schreier died at Christmas.  During the war years, the boys were safe in lodgings outside the city but were, understandably, frightened. In December 1944, Rudolf Mauersberger (1889-1971), for decades the Kreuzkantor of the Dresdner Kreuzchor, wrote his Weihnachtszyklus so they could sing and cheer themselves up. Please read my article about Schreier and his importance in the continuation of vocal traditions which emphasize emotional and spiritual engagement : always more challenging, intellectually, than "market forces". Rudolf Mauersberger's Dresdner Requiem RMWV 10, 1947 revised 1961.  Mauersberger (1889-1971) was, for decades, a driving force behind the Dresdner Kreuzchor, deeply immersed in its musical heritage, so the Requiem is a heartfelt cry of anguish. I've been planning to write about it for years, but it's too painful, but maybe now I must confront it.  There are clips of Schreier singing the part in 1949 (see below) but the best known full recording was made in the Lukaskirche in October 1994, Matthias Jung conducting the Dresdner Kreuzchor.  The orchestration is deliberately spartan, in the Lutheran tradition, with organ and celeste and percussion (bells sounds, knocking wooden sounds, drum rolls), restrained trumpet and winds.. It was issued to mark the 50th anniversary of the bombings, with a dedication written by Roman Herzog, the President of the Bundesrepublik Deutschland. 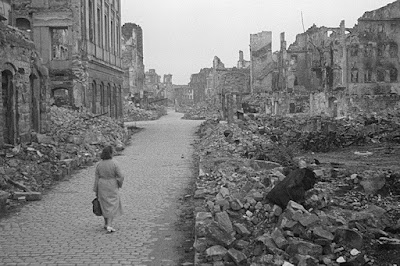 Introducing the Dresdner Requiem is Mauerberger's Wie liegt die Stadt so wüst RMWV 4/1,part of the Chorzyklus Dresden, first perfomed in the bombed out ruins of theKreuzkirche in August 1945- see photo above, where the audience is standing, wrapped in heavy coats. "How lonely sits the city that was full of people.....From on high He sent fire into my bones He made it descend. Is this city, which was called the perfection of beauty, the joy of all the earth? "  On this disc, it's followed by a brief sound recording of the great bells of the Kreuzkirche ringing in their glory. Heard together, they're very moving.  The Dresdner Requiem proper starts in a relatively conventioibal liturgy - an introit, antiphon, psalm and antiphon, but the use of three choirs, one at the altar, another "echo choir", at a distance, and a third Hauptchor (tutti) for deeper resonance gives the piece spatial aspects which intensify meaning. Interplay is significant, too, between larger and small sub groups, and the plaintive alto soloist, between older and younger singers, suggesting constant change and spiritual searching.  In the Kyrie, the choirs call en masse for mercy but the Epistel introduces a more personal theme : "I heard a voice from Heaven saying.....Blessed are the dead who die in the Lord....that they might rise from their labours", echoed by the Graduale, where the younger, more ethereal voices ring out in their purity.

The Transitory marks even sterner stuff. "Es ist ein Kurz und mühselig Ding um unser Leben".  Our names will be forgotten  with the passing of time and no-one will remember anything we did, Our lives will blow over like the last vestige of a cloud...thus he who comes to his grave, comes not from it again.....Therefore I will not restrain my mouth, I will speak in the anguish of my spirit, I will complain in the bitterness of my soul.....you will seek me, but I shall not be".  No maudlin comfort here but something infinitely tougher.  The Altarchor and Echochor offer a measure of relief, but first one must deal with grim reality.  In the brief Tod, the choirs  proclaim "Wer will Gott lehren, der auch die Hohen, richtet !". some die at ease, some in bitterness, but both turn to dust, consumed by worms. this is the context of the Evangelium, "Ich bin die Auferstehung und das Leben" the belief that conquers fear even in the flames of the Dies Irae.  Thus "nach dir streck' ich die Hände, zum Zerknirschten, Herr, dich Wende, o gib mir ein selig Ende!" and the peace that follows.  Yet the full force of retribution is yet to come. The section "Der Herr hat seine Hand gewendet", its portent fortified by percussion and brass, is particularly powerful,, its text is dramatically vivid : God has given full vent to his wrath and consumed by the foundations of a great city. Its towers are destroyed, the people crushed, selling treasures for food. Mankind offers nothing : only faith. does. For those who lived through Dresden and many other horrors, such images would have been all too real.

The intricate garland of  prayers, Sanctuses, hosannas and chorales which follow, build up gradually to a vision of divine redemption,  all the more glorious because they have been won after brutal struggle.  In the Vorspel and Chorale the congregation joins the choirs, all singing "Mit Jubelklang, mit instrumenten schön auf Chören ohne Zahl", the percussion ringing like muted church bells.  The Agnus Dei is heartfelt : faith isn't easy, it's achieved from deep within.  In the De profoundis the alto solo sings almost alone, the choirs hushed behind him. If God can hear this fragile voice, God can hear all.  The choirs and congregation join again for the finale Chorale,the organ leading. At last "Lass sie ruhen in Freiden. Amen". Not triumphant, not cocky but humble and sincere.