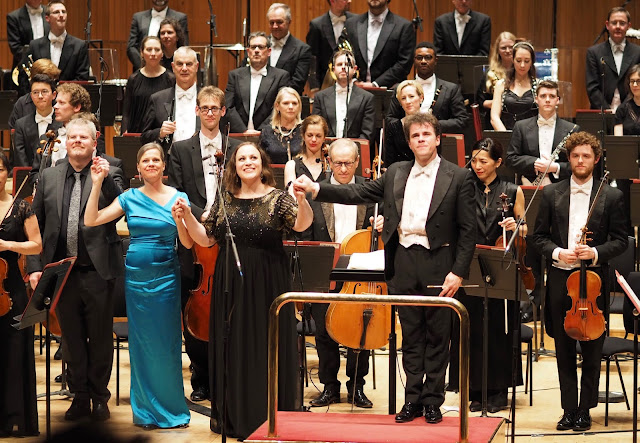 Visceral and intense Mahler Symphony no 2 ("The Resurrection") with Jakub Hrůša conducting the Philharmonia Orchestra at the Royal Festival Hall with Camilla Tilling, Jennifer Johnston, The Philharmonia Chorus.  How lucky I was to attend with friends who between us have clocked up hundreds of performances of Mahler's Second over the last fifty years.  Proof that the better a piece is, the more there is to discover. Every good performance yields insights : in a market now oversaturated with safe and predictable, it's a joy to hear an approach that derives fresh from the score itself, rather than from market expectations.

With his foundations in Czech repertoire, Hrůša doesn't do "routine" Mahler. I heard him do Mahler in 2017 when he conducted Mahler's Symphony no 4 with the Czech Philharmonic, then again in 2018 when he conducted Mahler Symphony no 5 with the Philharmonia. Please read my article "How Bohemian was  Gustav Mahler?" HERE. With this Mahler Symphony no 2, the answer is that Mahler was Mahler, drawing on roots far deeper than "just" the Austro-German tradition, addressing universal human issues with highly individual and original passion.  As in most of Mahler, there are extremes in this symphony,  but they're not there just for effect. They serve a purpose. What can be more extreme than the contrast between death and life ? Death is shocking, and it is final, whether or not you believe in resurrection in any conventional sense.  But Hrůša appreciates what Mahler might have meant. The  Klopstock hymn Mahler quotes offers "Unsterblich Leben!....Wieder aufzublüh’n, wirst du gesät! Der Herr der Ernte geht Und sammelt Garben Uns ein, die starben.". This image of regrowth and renewal as part of the cycle of Nature pops up again in Mahler : "Allüberall und ewig blauen licht die Fernen! Ewig... ewig... "

The first movement was inspired in part by the funeral of Hans von Bülow, who Mahler venerated.  Yet it begins with a great burst of energy. It needs this kind iof emphasis, since it's is a herald of what is to come.  Haitink has taken this movement very slowly, focussing on the way a body shuts down gradually before oblivion, a very good insight indeed.  A funeral march is processional, but its destination is never in doubt. No-one ever gets away ! Hrůša maintains a steady pace, but makes clear the figures in the background that propel the movement - lines that fly in sequence, strings sometimes bowed, sometimes plucked, pizzicato like running footseps, always flowing. Not for nothing did Luciano Berio incorporate Mahler's Second into his Sinfonia, making connctions with a river, fed by many tributaries, flowing into an ocean, refreshed again by rain. Another image of the cycle of Nature. Hrůša's Allegro maestoso is "Mit durchaus ernstem und feierlichem Ausdruck", the dignity all the more moving because it carries in its flow a sense that passage is not in itself an end. That final rushing descent into the abyss had a powerful kick, echoing in the silence of the Luftpause. Hrůša and the orchestra knew that it's there to signify the silence of oblivion, purgatory before resurrection. Pity the RFH audience thought it was time for a coughing epidemic.

The unrushed Andante acted as a foil to the urgency of the Allegro. Although much is made of the Ländler aspects, these too exist as part of the wider concept, for peasants live in harmony with the seasons and with the cycle of natural change. Though peasant dances can be crude, it doesn't follow that performance needs to be crude, so Hrůša's emphasis on the vernal aspects of this movement renminded us that even in dark times, things happen under the earth which will eventually bear fruit.The third movement again brings contrast, which Hrůša magnified when the cymbals and timpani, centred in the middle of the platform, exploded into life. I nearly jumped out of my seat, but that was fine. Mahler knew what he was doing when he wrote this shockingly bold introduction. This schrezo quotes Mahler's song Des Antonius von Padua Fischpredigt. Like Dionysius, St Anthony is drunk, preaching to fish who hear but do not actually listen. Perhaps the song is used to indicate the futility of words, which is ironic, since in this symphony Mahler begins to use voice as part of his orchestral toolbox.  On the other hand, though, the fish represent a life force much more powerful than mankind.  Their actions speak louder than pious prayers.  Hrůša was particularly effective evoking the fluid energy in the leaping figures which suggest the movement of fish, leaping upwards, out of their natural watery environment, scrapping exuberantly, being true to their natuures, and swimming away, free. A glorious climax: summer is marching in, references to Pan, Dionysius and Mahler's Symphony no 3. But yet again, though a sudden wild diminuendo at the very end, gongs reverberating. Urlicht (here with Jennifer Johnston) is a cry of anguish, much like the agony of childbirth. For indeed, this is a turning point in the symphony. Like childbirth, there is a purpose to suffering "Ich ließ mich nicht abweisen! Ich bin von Gott und will wieder zu Gott!".

The extremes inherent in this score can be overdone, but not on this occasion.  In the all-important final movement, Hrůša had thought through the dynamics of the Royal Festival Hall and in the orchestra.  The doubles basses sat just behind the harps, together magnifying impact : the darker sounds like the earth, the brighter sounds like heaven.  Magnificent rolling percussion, swept by turbulent strings, as another march develops, this time an irrepressibly energetic march, the brass sassy, bells ringing in celebration. For all we knoiw this might be the march of the life force exemplified by the fishes, hence the cheeky screams from the lower woodwinds, and the defiant, swirling figures, the sudden diminuendo and the wailing trombones, their chill turning to more sublime, otherworldy figures from which the phrase "Das himmliche Leben" emerges,with woodwind calls.

The offstage brass ensemble was seated outside the auditorium, just outside the Green-side door,  invisible but with just the right degree of audibility. Usually in this hall, they get put into a box, often the Royal Box but the effect is often too strident.  This also allowed the finer details, like the delicate woodwinds and pizzicato to shine clearly. Later, when the offstage brass returned, the horns stood above the orchestra to the left of the conductor, while the trumpets stood to his right, spreading the balance with much better effect. The importance of spatial elements can't be stressed enough - this is "a symphony that contains the world", past, present, future.  Every instrumental voice matters, just as every mortal who has ever lived or died. At last the voices are set free, the soloists, Camilla Tilling and Jennifer Johnston, leading the choir. Though the diction of the choruses wasn't ideal, I'd much rather hear them sing with musical intelligence like this, the reverence better integrated with the soloists and orchestra.  In any case, they echo the words the soloists sing, and this symphony is so well known that most people know what the texts mean. When the male voices cried out "Bereite dich zu leben!" everything came together in magnificent climax.

This concert will be broadcast internationally, online on BBC radio3 on Monday, 9th March
at February 21, 2020