Between 1809 and 1816, Beethoven wrote dozens of arrangements of folk songs and folk-like material from Scotland, Ireland and Wales for the Scottish publisher George Thompson.  Sunset (or Der Abend: Die Sonne sinkt ins Ettrick Thal) comes from from Beethoven's 25 Scottish Songs Op 108/2 (1818) to a poem by Walter Scott, (yet another Beethoven contemporary) The Weary Change (The Sun sets upon the Wierdlaw Hill).  For the Early Romantics, Scotland suggested an idealized image of societies where people lived close to Nature, as yet untamed by civilised convention. When Mendelssohn visited, he travelled, sometimes alone by foot - no tour guides or organized trips, no hotels, no-one to translate from Gaelic to German. For someone from his background, this might have been the equivalent, perhaps, of visiting an alien planet where almost nothing is quite familiar, but which provides unending stimulus and fascination. Nothing safe or connentional.  For Walter Scott, native Scotsmen represented a past that had to be redeemed by making the Scots more middle clas and "English", but European Romantics liked Scotland for what it was. (Please see my piece on Rossini La donna del lago). 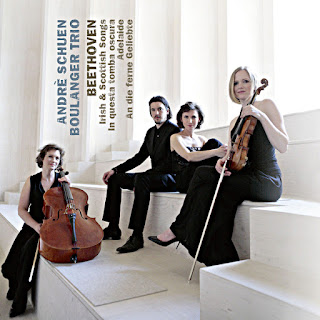 Beethoven's setting of Sunset replicates Scott's delight in semi-archaic syntax and references to Scottish history, which may or may not be lost on modern listeners, but that very strangeness I find adds to the mystique. This affects interpretation to some extent. There are many very good performances by native English speakers, but I'm particularly fond of performances by non English speakers who approach the songs as music, pronouncing the exotic words so the sense of mystery is enhanced.  How did "Wierdlaw Hill" get its name and what is the "holy fane of Melrose rise in ruin'd pride". Even the syntax is strange. Yet Beethoven's phrasing makes sense : all the singer has to do is trust the score, not tidy it up. Notice how subtle Beethoven's setting is : as realization sinks into the poet's mind, strings are plucked, rhythmically, like faint heartbeats. Thus do the "minstrels" reply to "The harp of strain’d and tuneless chord".

Of the many recordings, my particular favourite is Andrè Schuen with the Boulanger Trio. This set's interesting too because the songs are so well chosen, showing how Beethoven adapted similar figures into different songs, so the songs are connected by a cohesive thread.  Anyone with time on their hands could probably check the scores for greater detail, but it mkes for a very satisfying whole.  Wonderful singing - such reesonant depth and subtle nuance. Buy the CD on jpc.de or amazon and attend the recital at the Elbphilharmonie on 20th February (details here)   Please also read my other posts on  Andrè Schuen esp his recent Liszt Petraca Sonnets.  And now, here's the text of Scott's poem :
The sun upon the Weirdlaw Hill,
In Ettrick’s vale, is sinking sweet;
The westland wind is hush and still,
The lake lies sleeping at my feet.
Yet not the landscape to mine eye
Bears those bright hues that once it bore;
Though evening, with her richest dye,
Flames o’er the hills of Ettrick’s shore.
With listless look along the plain,
I see Tweed’s silver current glide,
And coldly mark the holy fane
Of Melrose rise in ruin’d pride.
The quiet lake, the balmy air,
The hill, the stream, the tower, the tree,-
Are they still such as once they were?
Or is the dreary change in me?
Alas, the warp’d and broken board,
How can it bear the painter’s dye!
The harp of strain’d and tuneless chord,
How to the minstrel’s skill reply!
To aching eyes each landscape lowers,
To feverish pulse each gale blows chill;
And Araby’s or Eden’s bowers
Were barren as this moorland hill.
at February 08, 2020