A good all-Beethoven concert  with Ben Gernon conducting the BBC Philharmonic Orchestra live from Bridgewater Hall, Manchester (listen here). Worth hearing for many reasons. Gernon very  good, indeed. With Gernon as Principal Guest and Omer Meir Welber as Chief Conductor, the BBC Philharmonic needs a breath of new life after a period in relative doldrums.  In this Beethoven anniversary year, there will be dozens of concerts, but not many programmes as interesting as this.  Beethoven Symphony no 3 in E flat, 'Eroica'  - yes ! But also the full The Creatures of Prometheus Op 43 (1801) and Opferlied, Op 121b (1824) for soloist (Jennifer Johnston) and chorus (The Manchester Chamber Choir).  The last two played first, creating background to the symphony.

Prometheus stole fire from the gods to enlighten mankind. Enlightenment in every sense : Apollo the god of the arts and his muses, and Dionysius, the god of wine and creative freedom to counerbalance Zeus, the symbol of authoritarian order. The ballet is structured in two acts, of which the second loosely introduces the muses of music, theatre, literature, history, dance and tso on, "The creatures of Prometheus". Now that it seems the world is becoming increasingly fascist,  it might help to remember that rulers like Hitler, Mussolini, and Stalin  saw the arts as a reflection of their own glory, ignoring the humanity and diversity of true creative endeavour.  For Beethoven, Napolean was first a liberator, then a tyrant. If only modern political followrs had the guts to realize that they can be wrong.  Napolean, unlike some tyrants, did leave a heritage, like the decimal system. Or maybe the tyrants of today don't care about anything "foreign" and that Prometheus was wrong.

Beethoven's Opferlied underlined the impact. The text is Friedrich von Matthisson (1761-1831) an almost exact contemporary of the composer, both of them exposed to the same social and cultural upheavals of the time. Matthisson's writings tended towards philosophy, tinged with post-classical idealism. Possibly his best know poem today is Adelaide,  which Beethoven set as a Lied as his op 46 around 1796, when he was working on the original draft of Opferlied (WoO126) for solo voice and piano, revised in 1801-2.  There are more connections than one might think at first. In Adelaide, the poet is wandering lone and forlorn, Adelaide perhaps no more than a figment of his imagination inspired by visual images like mountains and valleys, the swaying of branches and nightingales. Then the final strophe. All is bathed in seemingly light-hearted pastoral sweetness, but the meaning is clear. Whoever, or whatever Adelaide might be can only be revealed after death : 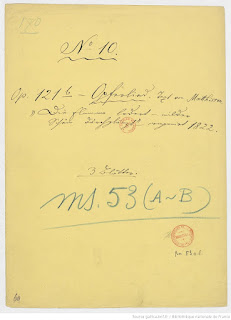 This version for soloist, chorus and orchestra heard here is better known, was completed almost a quarter of a century later.  This version fits the nature of the text better, because it's more formal and heroic than a Lied.

(The flames glow, embers glimpsed through dark groves of oak trees which have symbolic significance in German mythology. The fragrance of burning oak lingers. Bend a gracious ear towards me and honour the sacrifice this young man gave for you (the flames are the funeral pyre of a dead hero). The hero is the highest, best regarded, forever the Defender and Shield of Freedom.  his spirit lives on through the air, earth, fire and flood.  Give to me the young man than the grey heads of your fatherly armies, O Zeus, the Beautiful for the Good).

The narrator is a Valkyrie-like heroine, which is why it suits a female singer with Wagner credentials. Though Wagner wasn't yet on the horizon, the ideas he imbibed hark back to the wars against the Romans, and their embodiment in German mythology.  This prototype Brünnhilde is echoed by a reverent chorus and orchestral parts dignified by restraint.