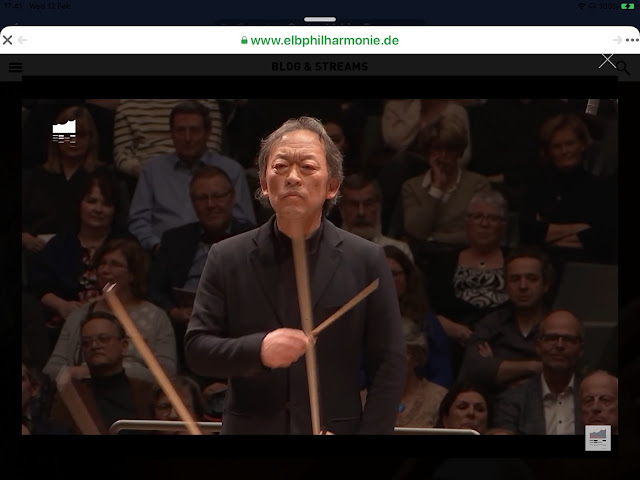 Life-affirming Mahler Symphony no 9 from Myun-whun Chung, conducting the Royal Concertgebouw Orchestra, Amsterdam, from the Elbphilharmonie, Hamburg.  Triple run of A-Listers ! One of the best conductors around, one of the best orchestras heard in the wonderful acoustic of the Elbphilharmonie. The RCOA has probably done more Mahler than most orchestras, Chung is a Mahler specialist too  so excellence was to be expected,  but wow, was this good !  Really great musicianship at this standard challenges and stretches our appreciation of the music itself.
There is never any one way to do good music so thank goodness there are musicians who care deeply enough about the music to approach it with such insight. The market for performances that fit listeners’ preconceptions will always be greater than the market for anything new but that's more to do with received opinion. These days many prefer C or D listers because they're less likely to get in the way of fixed certainties. So the more you listen and the more widely you listen, the less the likelihood of fixed positions.  And Mahler's music is so very much open to new possibilities and new horizons.
In this case, Chung's life-affirming interpretation, brimming with life and the love of life, proves that there is so much more to the symphony than the old cliché that M9 is only about death.  Maybe one day audiences will catch up on the amount we've learned about Mahler, the man and his music in the last 50 years. From the early songs and Das klagende Lied to the final stretches of what was to be the tenth symphony, a powerful life force surges, which cannot be defeated.  The second, third and fouth symphony address the world beyond and in the 8th and Das Lied von der Erde,  there are concepts of tranfiguration onto another plane.
A wonderfully rich first movement, low timbred winds and brass lit by harps, and strings that move like gentle breezes - always  a sense of movement - andante commodo, an open hearted embrace of life and its diversity.  For a "pulse" this is, suggesting the human body at rest, calmly breathing.  Gradually the palpitations built up towards expansive outbursts, as if invigorated by the flow of life.  When silence descends, marked by timpani ans strident brass, the effect is chilling.

The harp ruminates, and the steady pace resumes.  The music flares up again, fractured angular shapes suggesting tension, alarm and a spiralling descent into darkness, and a wall  of mournful winds and brasses, and at last, a glowing coda, like embers yet undimmed. In Das Lied von der Erde, the poet fears death because he loves life too much to let go. enjoys life too much to leave it. Thus the gradual coming to terms, which also influences the first movement of the 9th, and its culmination, where the orchestra soars in an outburst of defiance. To really understand Mahler, it helps to think of the works as part of a continuum. 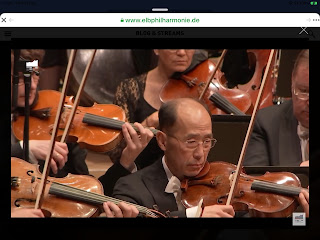 A vigorous second movement, marked "Etwas täppisch und sehr derb".(rustic, simple, earthy). Why Ländler? Ländler are danced by peasants who till the soil, who know that seasons change and that harvests return after winter. This movement is much more than folklore and quaint kitsch, connecting yet again to themes of change and rebirth that run through so much of Mahler's work.  Earthy in that sense doesn't necessarily mean crude, especially when considered in the context of the interpretation as a whole. There's humour here, not grotesque per se. Pan awakes, bringing life !  The pace whipped up, propelled along with force, yet once again, the dance returns, for dance, like Nature, moves in rhythmic cycles.  Poise, more so than turbulence is of the essence.This idea of change and renewal informed the third movement, written in rondo form. A chill seemed to descend with the wild, almost manic figures, the "burleske" mocking any ideas of simple comfort.  Has frost cut down the harvest?  Dark bassoons murmured, the strings went quiet, yet again  from this desolation a melodic string line arose, rising upward. (The violist looked exactly like my father, which for me added poignancy).  Chung captured the sense of forward movement - the trumpet line like a horn in the Alps, resonating from peak to peak. Great walls of sound, looming like cliffs, yet tiny details, like the triangle clearly audible.

In the final movement, Chung again brought out the sense of flowing movement, the "rondo" of the changes of seasons and the passage of time. Thus the growling low brass, as if sounds were coming from the bowels of the earth, while high, string tessituras evoked something more transcendant.  The orchestral Leader (who looks like young Brahms) delineated his line so it seemed to shimmer, weightlessly.  Many of these players would have worked with Bernard Haitink, legendary for the spiritual transparency he could bring to this symphony.  When the warm surge that characterized Chung's first movement returned, the idea of cyclic change felt reaffirmed.  The idea of differences reconciled in the figures for oboe and flute, moderated by harp, and the magnificent coda, where the strings en masse rang out in glowing chorale, leading the orchestra onward, ever forward.    Please listen here, it's wonderful.