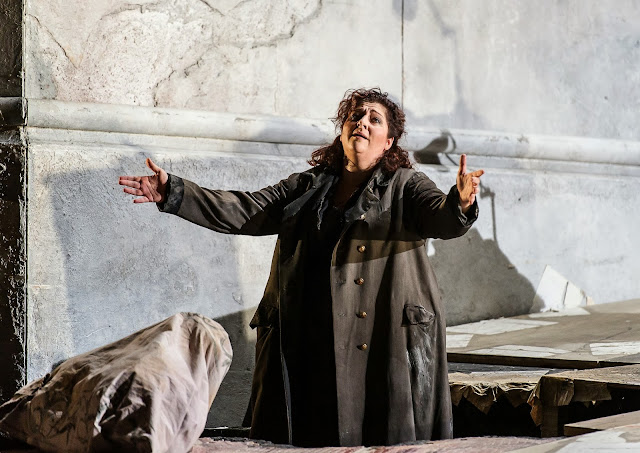 Another chance to hear Richard Strauss Elektra from the Royal Opera House : listen here on BBC Radio 3. Christine Goerke, Adrianne Pieczonka, Michaela Schuster and Iain Paterson sing, Andris Nelsons conducts. When this production premiered it was savagely attacked, much in the same way other good productions - and operas -  are met with hostility. One critic even complained that the palace wasn't "regal" enough.  But what's "regal" about regicide, madness and bloodthirsty revenge? Thankfully, five years on, audiences have matured. Tickets sold at a discount on the first night but word of mouth recommendations ensured that they sold out solid by the middle of the run.

This broadcast of Elektra was recorded live at the Royal House in September. Here's what I wrote at the time :

"Richard Strauss Elektra at the Royal Opera House is every bit as explosive as reports indicated.  Audiences are  perfectly capable of appreciating extreme trauma as drama. At last, this intelligent production gets the superlative performances it deserves, suggesting that Elektra should feature more regularly in the ROH repertoire. There's more to opera than tired rehashes of Così, Traviata and Carmen. It takes courage to do Elektra with the intensity it merits. Get to this before the run ends, because it's very powerful. If ROH has the foresight to film this, it will become a cult on DVD.

Andris Nelsons conducted. No mistaking this Strauss for Johann! Nelsons is always dynamic, but Elektra seems to have electrified him.  He relishes the danger of Strauss's most adventurous score, which threatens to break through the bounds of tonality, just as Elektra herself breaks through the bounds of convention. Nelsons stretched the Royal Opera House orchestra, and they responded with unusually idiomatic freedom, almost as though they were a specialist ensemble like the London Sinfonietta.  His tempi are well judged, creating huge surges of tension. It's as if the palace itself were alive, breathing like Elektra herself, a volcano, a force of nature about to erupt. The ghost of Agamemnon hovers oppressively over the drama. The King doesn't need to sing. His "Schatten" looms in the backdrop, and his voice is in the orchestra. Dark bassoons and basses slither, rumbling under the seething strings. Details emerge like brief releases of tension: sour, bitter woodwinds, oscillating like the pan-pipes of mad dancers.

Yet Elektra affects us most emotionally when we identify with her as a human being. Charles Edwards, the director, wanted to avoid the caricature of Elektra as a mad harpie. "A lot of her music is soft, amazingly tender...... Elektra, for all her righteousness, is deeply damaged: everything that's weiblich, human and fertile about her, she’s had to repress, yet she doesn’t hold it against her sister who stands for all she can never have.” In 2008, this was Mark Elder's first Elektra. He overdid the restraint at the expense of drama. This music needs a schizophrenic dynamic between oppressive extreme and fragile vulnerability. Nelsons gets the contrast perfectly. At critical moments the orchestra almost falls silent as singers growl sotto voce. The impact is all the more unsettling.

Christine Goerke is astonishingly good. She projects crescendi at maximum volume without sounding shrill or forced, though that might well be within the character. Goerke's technical control allows her to create Elektra as a fully rounded personality, a normal woman driven to extremes. She terrifies the maids because at least one of them identifies with her. Women are brutalized in societies like this. Goerke's "inner Elektra" is equally impressive. When she sings about Elektra having once been beautiful, Goerke's voice mellows into rich rubato: we can "see"  the young innocent she used to be. Edward's Personenregie is exceptional. Every gesture, every modulation works expressively. When Goerrke sings "Orest! Orest!" , she does so with such Sensucht that you can visualize her "Traumbild".  Nelson's conducting in this section  glowed with wistfulness. 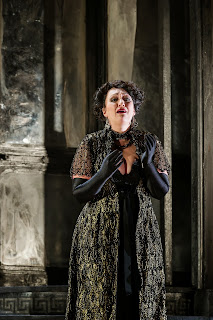 For all we know, Agamemnon was a brute, and Klytemnestra was redressing the balance. Michaela Schuster's Klytemnestra is still young enough to hope for happiness. Schuster's voice is vibrant and sensual, and she moves with energy and litheness. Psychologically, this is perceptive. If Klytemnestra were a desiccated hag, we might not feel the desperation which led her to this cataclysm. The insomnia sequence suggests how deeply conflicted she is. Klytemnestra is strong, but Schuster (very well blocked) was able to suggest that there are savage cracks beneath her surface.

This is one seriously dysfunctional family, but we're drawn to them because they're realisitic. Adrianne Pieczonka sings Chrysothemis with authority, so one feels that the character is mature enough to make choices even if they're not the ones her sister makes. Were it not for Elektra's sacrifice and Orest's courage, Chrysothemis might have become trapped in the same syndrome of denial and revenge turned unhealthily inward.

Iain Patterson sang Orest with enough character to make the role a credible hero. The role isn't massive, but Patterson makes a far stronger impact than some who've done the role. With genes like these, Orest needs to be credible. Again, the direction is good. When Patterson climbs into the castle, hanging onto a rope, it feels, and looks dangerous. When he and Elektra embrace, it feels genuine. "The dogs recognized me": a deft human touch in the libretto, which Patterson sings with warmth. In this revival, there isn't a single role, however minor, that isn't well cast and well directed.

This time round, the staging and direction are even more focused. The revolving door as plot device works extremely well. It's a kind of Tardis, compressing the violence beyond the stage, its movement reflecting the sudden switches of fate in this opera and in its turbulent music. The palace wall looks impenetrable, but the cloth backdrop reminds us that the inner rooms will be breached, and Klytemnestra, for all her power, will die. Debris is strewn over the stage, and bodies, but purposefully. We are "inside" the fractured psyches that inhabit this opera and its insights into human psychology."