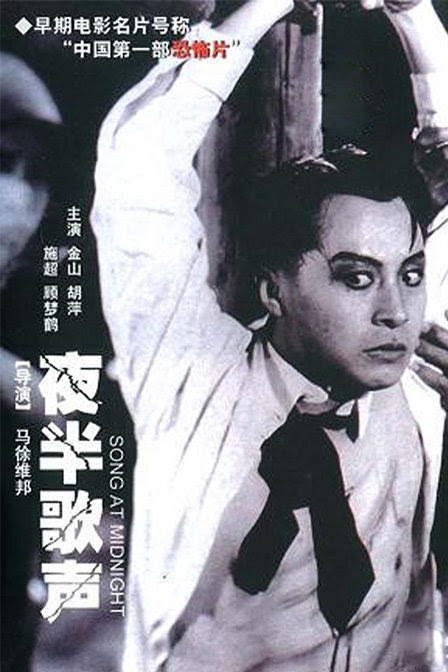 A Song at Midnight has cult status in Chinese cinema. Although the film compares to Lon Chaney's The Phantom of the Opera (1925), the music and the socio-political context lift it above the level of ordinary horror story.  A Song at Midnight (夜半歌聲) is usually billed as the first Chinese horror movie, but that's not what makes it really interesting.  The music was written by China's foremost composer in the western style, Music is integral to the film, and is part of its symbolism.

Xian Xing Hai (1905-45) was born destitute in Macau but managed through hard work and scholarships to train at conservatories in Shanghai, Beijing and Paris. He was a virtuoso flautist, in the western classical tradition, but studied Chinese music as well, aiming to create a unique new form for a new nation. The May Fourth Movement was an attempt to modernize China through changes in art and social attitudes. Cinema was thus part of this reformist zeal. Chinese movies entertained, but also educated. The studio was Xin Hua (New China). The writer and director was Ma-Xu Weibang (馬徐維邦) (1905-61) like Xian, a poor orphan who made his way up in progressive film circles. A Song at Midnight was made in 1937, when the Japanese invasion escalated, and Shanghai itself fell to the occupiers. Xian made the long trek from Shanghai to Yenan to join the Communist party. I don't know what happened to Ma-Xu but he ended up in Hong Kong, 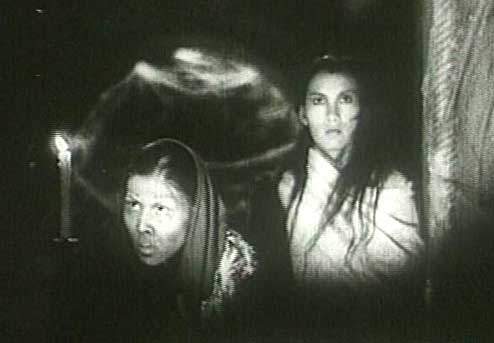 A Song at Midnight is art film, every bit as much as French and German film in this period often combined high cinematic standards with serious music. Caretakers in a disused opera house patrol the building with lanterns, beating time with a stick. A shadow appears at midnight singing a song of lost love.When we hear the shrouded figure sing, we can hear, even through the grainy recording, that he has a glorious, western operatically classically trained voice.  A woman appears with her elderly maid. She's come to listen to the shadowy figure, for he sounds like her lost lover, an opera  singer called Song Dang Ping. Her expression is steely, not sentimental. She's wearing a mourning robe. She thinks her lover had been brutally murdered.

In a rainstorm, a new theatre troupe arrive in town. They wear snappy western outfits, and the women wear makeup and fashionable dresses: what a contrast to the dilapidated old building thick with cobwebs, with old-fashioned paper in the windows instead of glass.  Beautifully photography. Troupes like this used to tour the country bringing modern theatre and modern ideas, and often performed in makeshift places. The Director hands out the script. They're doing a piece of music theatre about a woman who,has lost her lover on the mighty Yellow River. Xian Xing Hai would write his masterpiece, The Yellow River Cantata in exile in the caves at  Yenan. The Yellow River Cantata describes the might river, also known as a "China's Sorrow" and its role in shaping Chinese history (Read more about it here)  The song in the film becomes part of the wider work. The small town agit prop theatre troupe is translated into a seminal work of modern Chinese music. 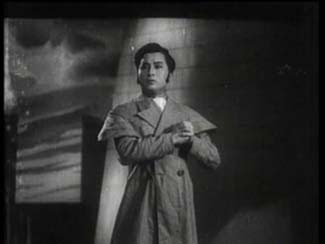 The actor Sun Xiao Ou practises singing the new anthem, alone, in the dark, but he can't quite get it right. Then the ghostly voice of Song Dang Ping sings it for him, bringing out the deeper meaning.  and intensity. Posters go up in town, announcing the new show. Now Sun Xiao Ou can sing with passion, "O! Huang Ho!" (O Yellow River). he's a hit! That night  Sun creeps into the bowels of the theatre to thank Song for teaching him. Wonderful sequence where single, hollow piano notes lure young Sun up rickety stairs. Intense discords and dissonance as Song Dang Ping materializes out of the shadows, holding a candle.The shrouded Song Dang Ping tells his story. He was a revolutionary who worked in theatre groups just like the one Sun is working in. He sang versions of western operas about freedom, costumed in a Beethovenian greatcoat before a line of Napoleanic soldiers. In this simple image, the film connects to Fidelio, to the rise of democracy and freedom in the west,  and to the way China was subjugated by foreign powers, not only Japanese but European. the ideals of Liberté et Fraternité didn't apply to subject nations. 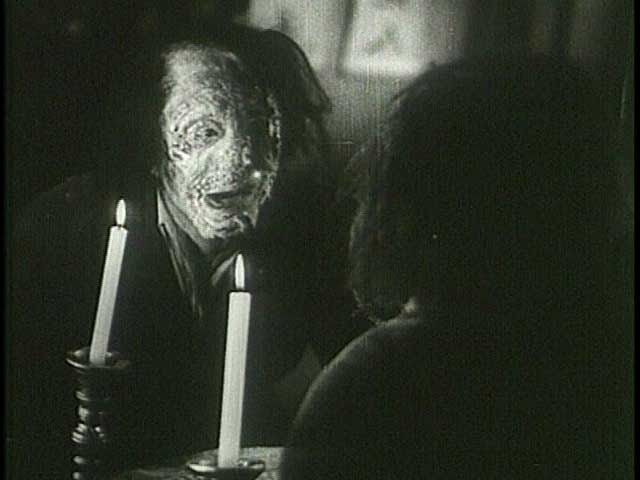 He falls in love with Li Xiao Mei. Unfortunately she isn't free, she's kept by a  rich man. In itself this is a subtle hint as to the deeper meaning in the film.  Her jealous protector has Song tortured in front of her, before acid is thrown at his face. He survives, hiding out with a  peasant family, whose small daughter adores him. The day comes when the bandages are removed. Song is hideous, his matinee idol good looks destroyed.  "No! No !" he wails in horror," I've become a devil"  He sends the little girl to Li Xiao Mei, to tell her that he's died. She goes insane. Juxtaposed frames intersect suggesting how her mind fragments. She's no longer any use to the criminal leader. Song hides himself inside the disused theatre, where Li's servant brings her to hear the mystery song at midnight.

Song knows he's beyond help, but can Li be saved ? Young Sun sings for Li, who comes into her garden, wraith-like, thinking that Song has returned, while Song watches from behind a bush. Music returns, sweetly fluttering like mad nightingales. Li is in a pavilion over a lake, delirious with joy, but still delusional.

Crowds flock to see the new play in town where Sun reprises Song's old role as a Florestan figure.  Song watches from the rafters. The music then borrows Bach Air on a G string, while the camera pans on Song's expressions of tenderness and sorrow.  Sun has a girlfriend called Lu Die, a perky modern girl, very different from Li, who has been seen in Republican period costumes. Times have changed, but wicked people stay the same. Lu Die is in her changing room when the bad guy who destroyed Song and Li comes in, to slithering strains of Gershwin Rhapsody in Blue.. It's not hard to read a political dimension into thius, given the situation in China at the time. Finishing the opera with a rousing finale about defiance, Sun rushes backstage and saves Lu from getting raped but the bad guy shoots her dead. Then Song appears, confronting the villain with the face he had destroyed. Having heard the gunshot, a crowd chases Song and the villain up into the rafters, through trap doors. Great shot of the outside of the theatre lit up by electric bulbs, and the grimy. cobweb covered backstage that is Song's world.

The villain falls and is killed. Young Sun calls for calm but the soldiers want to catch Song at all costs. Waving firebrands the mob pursue "the monster" in a sequence that references the 1931 Frankenstein movie, shot in almost abstract dark and light, which is very effective. It doesn't matter whether the mob are Chinese or Transylvanian or whatever. They exist the world over. Sun explains everything to Li, who faints with horror. The tower Song flees to is set alight and he jumps to his death. Li awakes as if from a nightmare. The final shots show Sun supporting her as she stares into the distance.