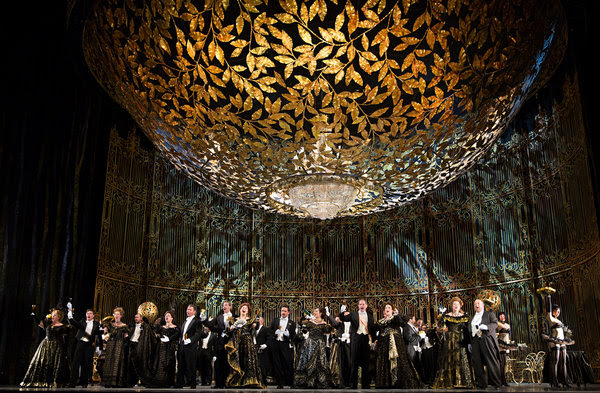 On New Year's Eve, the Met unveiled its new Strauss Die Fledermaus, directed by Jeremy Sams.  From still photos, it looks stunning, with designs by Robert Jones. That giant dome (vaguely like a punch bowl) looks as if it's about to explode, drowning the cast. The plot revolves on cheating and deception. Alcohol lowers inhibitions. In vino veritas. But indulgence can destroy. Much of the rage against Christopher Alden's English National Opera production last year was levelled by those who know the tunes but don't know the plot. Die Fledermaus isn't mindless fizz. In Europe, the passing of the old year was traditionally linked to death. Without something to escape from, the hedonism of Die Fledermaus would be less intense.

Part of the fun of Der Fledermaus is that it's an opera in fancy-dress costume, pretending to be something it's not. It adapts, which is the nature of good art.  Sams's The Enchanted Island upset audiences who didn't know enough about baroque style to recognize its audacious inventiveness. Like the characters in Die Fledermaus, some people invest too much in what other people think of them to appreciate real values. So I had no problem with Sams's English texts, which moved vivaciously enough. The music carries the words. But the spoken dialogue (Douglas Carter Beane) was a disaster, like a bad sitcom in its last season. It took itself far too seriously, smothering the wit in a soup of arch self-consciousness.

Die Fledermaus is tough because Strauss sends up the whole idea of "good singing". The singers must hiccup and slur, like drunks who can't talk right, far less sing properly. Even a diva like Elisabeth Schwarzkopf could let her hair down to do the music right. The Met cast were far too inhibited and reverential to let themselves respond to the music. Karajan's recording is a classic because he gets the tension and edginess beneath the fluff.  Kleiber's version works because it has maniacal panache. Remember the Met Midsummer Night's Dream, with good principals (Kim, Rose and Davies) let down by a team that didn't get Britten, Britain or Shakespeare. Maybe it's a cultural thing.  At Met interval talks, announcers coo as if they're in a church. 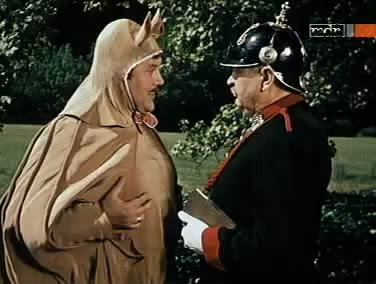 There is a lot going for the Met's new Sams Die Fledermaus : at least the cast aren't held down by Schenk's suffocating old curtains that act as costumes. But the performances will need rethinking, and the spoken parts rewritten. Dare I say it, but one of the most dramatically convincing Die Fledermauses is the 1944 Ufa Film (released in 1946) where the producers re-arranged the action? The film starts with Dr Falke being humiliated in a bat costume. This is the incident from which the  plot evolves, with its themes of  betrayal and revenge, and the reversal of master/servant power relationships.The spoken dialogue is snappy, too. in those circumstances, film makers could see something more in the piece than airhead bedroom farce.
at January 02, 2014