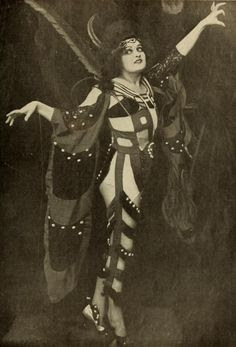 Robert Wiene's Genuine the Vampire (1920) was  eclipsed by The Cabinet of Dr Caligari, completed a few months earlier. But Genuine the Vampire is genuinely interesting, and not just for the hilarious name.  There's Genuine in all her glory wearing a dangerously revealing costume of belts and straps over what one hopes is a body suit but might be real flesh since she flashes naked thighs many times, and strikes poses that let the viewer linger. There's more nudity in this film than possibly any other of its period, and possibly long after. Note the coy "butterfly wings" and the stylized pose. One of the features of this film is the way Wiene freezes formal, stylized poses. In Dr Caligari and other films of the time, movements are theatrical, but not to this extent. In Genuine the Vampire, the poses are so stiff and held for so long that they clearly reference tableaux vivants, which were often used in pornography on the reasoning that, if the body resembled sculpture and wasn't natural, it could be deemed legit.

Genuine the Vampire isn't a vampire story in the Bram Stoker mode but quite explicitly connects to psychology theories popular in the late 19th and early 20th centuries. The film unfolds like a dream, where characters emerge and disappear without logic.  Genuine was an African goddess, kidnapped and sold as a slave to Lord Melo who keeps her prisoner in a geodesic dome in his mansion. Each day a barber comes to shave Lord M, who seems to like being shaved while he's sleeping. One day the barber can't come but Lord M's grandson Florian turns up. Like everyone else in this film, his costume is bizarre - exaggerated love locks and waxed curls and jodphurs. When Florian shaves his grandad, Genuine tells him to kill the old man, so he does. Go figure.

Other personages appear - a Black Slave (in real life possibly from Kamerun) , and Henry and Percy who seem relatively normal.  Genuine appears in different costumes, one made of ostrich feathers, with a Madam Pompadour head dress. Because the action is so slow, viewing the decor is very much part of the experience. The sets are Expressionist paintings, jagged angles and blocks, a collision of Franz Marc, the Cubists and Second Empire excess. Because the plot isn't rationale, the story ends when a mob waving scythes invade the mansion. Notice though that the mob aren't peasants. Their scythes are working tools but symbols of death.

Genuine is played by Fern Andra, in real life Verna Andrews from Watseka, Illinois (1893-1974) who married a Baron von und zu, though he was dead by the time she made this movie. Those strange set designs are by Walther Reimann, the painter and architect who did the sets for The Cabinet of Dr Caligari.  For a download of Dr Caligari, please see HERE.

Looks like this deserves a place of its own. Well, it's not a strict vampire film, but it could hold its own. Wonder though if it should make this list of classic vamp movies.