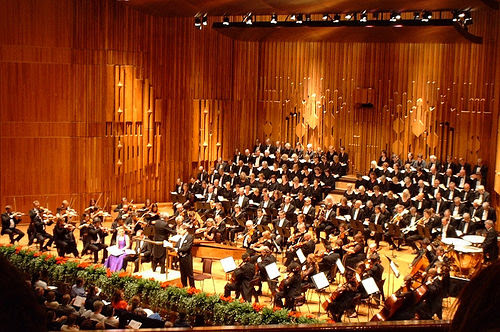 The Barbican Centre has announced its 2015-2016 season. Highlights (more details to come)

The UK premiere of Louis Andriessen's large scale opera La commedia  (part of the Louis Andriessen Composer focus. This will be part of a Total immersion in Andriessen's music, a range of concerts including: a performance of De Staat given by the Guildhall New Music Ensemble; Britten Sinfonia performing Dances and Tapdance; and UK premiere performances of Andriessen’s Mysterien and Rosa’s Horses with the BBC Symphony Orchestra. Lots on Andriessen on this site, he's one of my faves.

Masaaki Suzuki and Bach Collegium Japan begin their first major UK residency. Suzuki comes regularly to the UK (usually Aldeburgh) but in April 2016, he3 and his amazing choir will be joined by sopranos Hana Blazikova and Joanne Lunn, countertenor Robin Blaze, tenor Colin Balzer and bass-baritone Dominik Wörner, for two of Bach’s greatest choral achievements: a performance of Mass in B minor, one of their great specialities,  (8 April) and Magnificat paired with Bach’s Orchestral Suite No 3 in D minor, Concerto for two violins in D minor and Cantata Bekennen will ich seinen Namen BWV 200 (9 April).

Hans Zender's Winterreise with Ian Bostridge in a new semi staging by Netia Jones (read more about the piece HERE) This new incarnation  promises to be more, as it's now titled "The Dark Mirror"

Handel Orlando with The English Concert

Rolf Hind's opera Lost in Thought "the world's first mindfulness opera" which might sound odd but Hind is a very gpod composer and the production is by Frrederic Wake-Walker, also very good   Lore Lixenberg sings, also good news. indeed.  It's "based on the classic structure of an extended meditation, with the music and concept by Rolf Hind. Exploring the points of contact between sound and silence in music and meditation,  Lost in Thought will be an immersive musical performance in which the boundaries evaporate between performer and audience, between time and experience".
Composer focuses on John Adams, Thomas Adès, Louis Andriessen, George Benjamin, Henri Dutilleux, Henryk Górecki and Oliver Knussen

Renée Fleming in February 2016 with Jiří Bělohlávek in the UK premiere of Swedish composer Anders Hillborg’s The Strand Settings. Especially written for and dedicated to Renée Fleming, the work is a 24-minute song cycle about love and desire, based on texts by Canadian poet Mark Strand. She returns in April with Hartmut Höll in a Lieder recital.

Plus the usual glorious and fulfilling mix of concerts from the Barbican's resident orchestras, the BBC SO and LSO plus regular visitors like the Leipzig Gewandhaus Orchestra
at January 19, 2015

Email ThisBlogThis!Share to TwitterShare to FacebookShare to Pinterest
Labels: Barbican