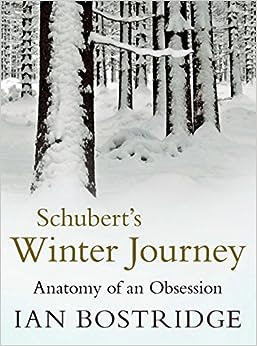 Schubert's Winter Journey: Anatomy of an Obsession, by Ian Bostridge, isn't yet another book about Winterreise.  Like the cycle, it is a journey of exploration. charting Bostridge's lifelong saga into the heart of the music, and into the world from which it came. Goethe may have been more of a classicist than a true Romantic, but his never ending search for knowledge defined his era and remains an inspiration for our own. In an era of instant expertise, this spirit of eternal discovery seems to have been replaced by fast-food thinking, instant expertise and Tea Party Intellectuals. We need books that don't leap to conclusions but focus, instead,  on the process of learning itself.

Questions are far more important than answers. This book is a Rückblick on a never-ending journey, whose goal lies not in conclusion but in the search that goes into understanding. It's a journey that takes courage and integrity. There used to be a body of opinion that the protagonist in Winterreise must have been mad, and must die in the end because he doesn't conform. But the protagonist, poet and composer deserve more respect.  In each chapter, Bostridge engages with the background to the ideas in the cycle, and with the wider social and artistic context.  "Winterreise is a historical artefact", he writes, ""made in history, and transmitted through and by it".  The poet, Wilhelm Müller, was a soldier who served in the wars against Napoléon in Russia, a "winter journey" if ever there was one. The chapter Der Lindenbaum opens up a panorama of ideas, which range from the symbolism of the Linden tree and its associations in folk magic, to a particularly thoughtful essay on Thomas Mann and the winter journey in The Magic Mountain.  Bostridge then proceeds to a technical discussion of triplet assimilation, then forwards to geology and the physical phenomena that are so much part of the cycle.  Many interesting observations. "To write on ice is an image of ambivalence, like writing on water but not quite letting go,.....Freezing feeling is....both to preserve and to anaesthetize it". Utterly relevant to interpretation of meaning.

Bostridge's sensitivity picks up on details like "eine Köhlers engem Haus" in Rast. Why such a specific reference, and not something more generic? Bostridge discusses charcoal burning and its economic context. Obviously we don't "need" to know this to enjoy the song, but the knowledge opens up new vistas which deepen our appreciation, and exposes the political undercurrents in Schubert's world. Incidentally, charcoal-burners were men who worked alone in the wilds. Is the charcoal burner an invisible precursor of Der Leiermann? Or another expression of the lonely mission the protagonist is driven to undertake?  Or a metaphor for artist and intellectuals and their role in society?  These questions matter, if we really care about the cycle and its deeper meanings.  Schubie doobie doo Schubert and Mahlerkügeln may be more popular with the masses, but as has been observed , the
"m" in "masses" might be silent.  Lieder is an art form of the intellect, a voyage into emotional depth, which all can undertake if they so wish. For this reason, Bostridge's book, with its wealth of ideas on art, literature and history, informs and stimulates. Had Bostridge stayed in academia, he might have been one of those truly good teachers who teach students how to think rather than what to think.

He also writes in a clear, elegant style with little of the logorrhea too many writers use to hide the fact that they aren't really saying much. His translations are simple yet emotionally direct.  Although he digresses, he always returns to the music and to the point.  Physically, this is a beautiful book, with thick, satiny paper and relatively few words per page,  and extremely well-produced illustrations. It is a throwback to the time when reading was a sensual  pleasure, to be savoured without rush. In some ways. it's like poetry, to which one can return to again and again and find more inspiration. Schubert's Winter Journey: Anatomy of an obsession might enrage those who expect confirmation of what they already believe, but for me, and, I think, many others, it's a springboard for ever greater engagement with the miracle that is Winterreise.