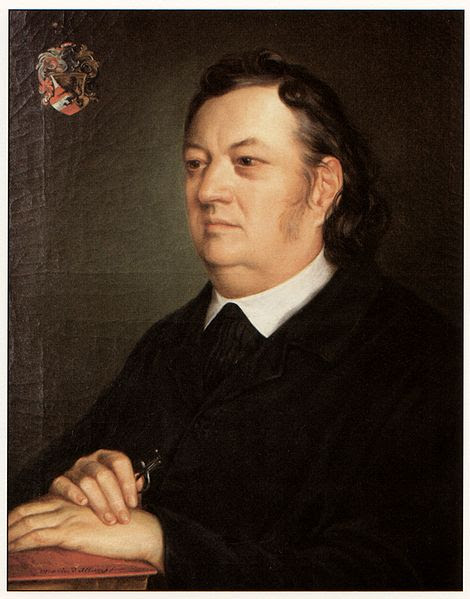 At the Wigmore Hall last night, Jonas Kaufmann  sang four songs from Robert Schumann's Kerner Lieder op 35 (1840). The full twelve songs comprise a true "song cycle" of which there are relatively few in the whole repertoire.  This is a very tightly structured cycle, sometimes compared to Beethoven's An die ferne Geliebte, to Mahler's Kindertotenlieder, or even to a miniature symphony. This indicates that perhaps Schumann heard greater possibilities in them  than a straightforward textual study might indicate.  Themes recur, with unifying effect, creating a kind of flowing, subterranean logic. This matters in terms of meaning, for the songs are marked by a strange, otherworldly aesthetic, as if each were a vignette into another dimension of consciousness. The cohesiveness of this cycle also makes me think of Schumann's interest in puzzles and arcane patterns. Nonetheless, some of the songs are outstanding on their own terms, which is why they are frequently performed  as individual stand-alones.

Justinus Kerner (1785-1852) was a Swabian medical doctor, interested in the wilder shores of therapy in his time, when ideas like magnetism, mesmerism and the occult weren't excluded. Imagine how he and his contemporaries would have embraced psychology!  Perhaps Schumann responded to Kerner's morbid imagination, just as Hugo Wolf was to respond to the poetry of Eduard Mörike, a generation later. 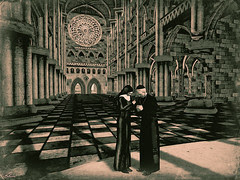 The cycle begins with the violent Lust der Strumnacht,  invoking storm, winds and heavy rain, through which a mysterious traveller makes his way. Listen to the savage "s" sibilants whipping the song forward to its adamant one-chord conclusion. Somewhere trapped inside the second strophe is the image of lovers snatching a golden moment - indoors  - who want the storm never to end. "Bäumt euch, Wälder, braus, o Welle, Mich umfängt des Himmels Helle!"   Already Schumann creates  the almost schizoid extremes of mood that characterize the cycle. This turbulence gives way to Stirb'  Lieb’ und Freud”! in which a man observes a woman transfixed by religious ecstasy. She's young but wants to renounce the world, to become one with the Virgin Mary.  Beautiful as the image is, it's unnatural to the man, who now can never speak of his love. The tessitura suddenly peaks so high than some singers scrape into falsetto, which is why the Kerner Lieder are more safely performed by tenors who can do the sudden tour de force transition with relative ease. Peter Schreier mixes purity with ardent protest - wonderful.  It's more of a strain for baritones. Fischer-Dieskau recorded it only once, as did Hermann Prey.. However, when Matthias Goerne, with an even lower timbre,  sang it he showed how the contrast between dark and light is integral to meaning. The high pitch isn't merely a way of imitating the young girl's voice, but a cry of pain  from a man in the shadows, seeing the girl illuminated by rays from a Heaven he can never attain.

As the last notes fade, Schumann throws us back into the maelstrom.. In 'Wanderlied',  the protagonist enjoys golden wine (a recurring symbol in this cycle) but this moment of rest is soon blown away by the dynamic opening line, "Wohlauf! noch getrunken den funkelnden Wein!"   Wherever he might find himself, he doesn't belong. Again, the minor key of 'Du junges Grün, du frisches Gras!' throws us out of kilter. The protagonist admires fresh shoot of grass, but he'd rather be under them than alive. The lyricism in the piano part is deceptive. Similarly, the rolling, circular figures in 'Wär' ich nie aus euch gegangen'  belie the intense regret in the text. These two songs function like a prelude to the magnificent ;'Auf das Trinkglas eines verstorbenes Freundes'. The canon-like melody has a grandeur that raises it above a mere drinking song. It has an elegaic quality, suggesting an organ in a cathedral – linking back again to the mood of Stirb'   Lieb’ und Freud”. Its long lines demand exceptional skill in phrasing, for it ponders the mystery of the relationship between the living and the dead, and along the way reflects the composer’s love of “Gold der deutschen Reben!”– at these lines there is a touching modulation which is sustained through the grandeur of “Auf diesen Glauben, Glas so hold!” A spider has wound its web round the long dead man's wineglass.  Again, Schumann forces the singer's voice  way up his register. suggesting heights and distances the living cannot reach.  The very spookiness in this song elevates it to another plane. This song doesn't come at mid point in the cycle for nothing.

For a moment, Schumann retreats into the relatively conventional Wanderung, and the delicacy of Stille Liebe , but notice how the soft, rolling figures from 'Wär' ich nie aus euch gegangen'  should keep us from being lulled.  Thus, Frage emerges like  a prayer: a miniature whose quiet tone disguises its key position in the cycle.  The protagonist is now the one who is mediating on the stillness which  the young nun and the departed friend have achieved.  With "Noch" the pace slows deliberately, so the last phrase "in arger Zeit ein Herz mit Lust?" shines upwards.

The final "movement" in the Kerner Lieder begins with Stille Tränen. It's not unlike Stille Liebe, but much richer and more assertive. The voice opens out, the piano part is firm and resonant.  The sleeper has woken from a night of tears, to a morning of heavenly blue skies.  Is the protagonist starting to wonder Dass du so krank geworden? The final song is, to me, one of the finest in the repertoire. It is marked “noch langsamer und leiser” (than the previous song)., rising barely above a mellifluous, perfectly controlled half -voice, so one has to pay attention to every syllable. The poet rejects the comfort offered by nature, and affirms that only death will release him  “…aus dem Traum, dem bangen, Weckt mich ein Engel nur.” The quiet lines, with the lovely slight pressure on “Engel”suggesting a caress. The invisible wings of an angel?  Whatever the source of this mystery it offers kindness and the hope of ultimate release.  Has the protagonist at last found that elusive inner repose  Listen to the contemplative pace of the piano, each note separated by silence, like a heartbeat. What a contrast with the turbulent  Lust der Strumnacht, ! The cycle has come, ouch! full cycle.
at January 05, 2015

I am unfamiliar with the Kerner lieder and have just 'discovered' them. What an insightful analysis, it will be interesting to listen to these different interpretations.

I'm singing the op.35 at the moment, but have been confused by stumbling across a reference to them in Peter Ostwald's Schumann biography, in which he dates the songs as 1828-29. All other info I can find dates them as 1840. Can anybody shed light?