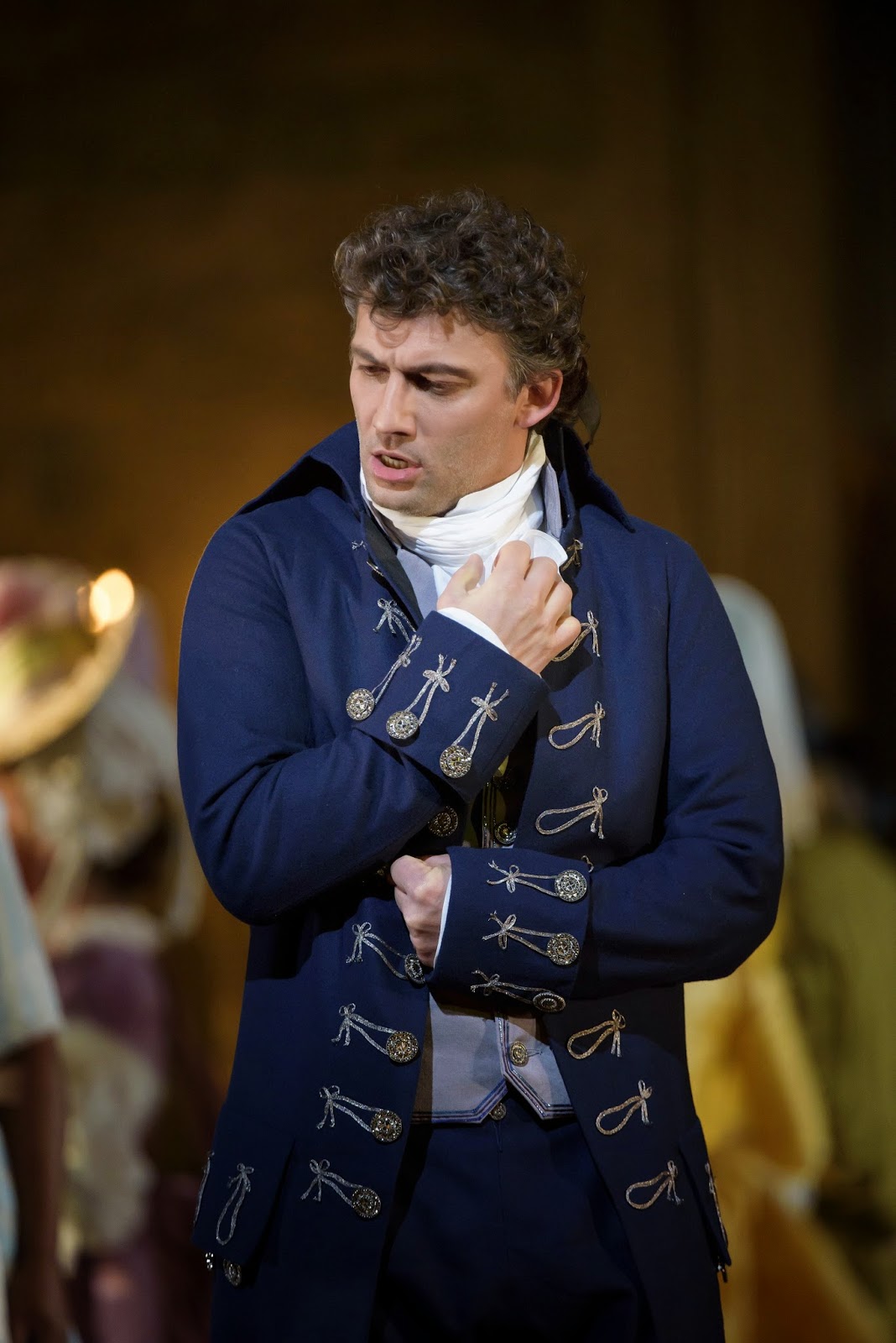 Umberto's Giordano's Andrea Chénier, now at the Royal Opera House,  is no more about history than Jesus Christ Superstar is about theology. "It's more of an opera", said a lady, making a long pause, "......than Fedora." That said, it's so full of catchy tunes and star turns that it would make a great feel-good West End musical.   Basically, it's a  pot boiler even by opera standards. Had it been written 30 years later it would have been a Hollywood extravaganza, complete with dancing girls. But gosh, is it fun in its own camp way!

Jonas Kaufmann redeems the opera altogether, and raises it to an altogether higher level of power and dignity .The part is ideal for his rich, Italianate  timbre with its hints of mystery and sensuality.   Technically, the Big Numbers in Andrea Chénier aren't nearly as brilliant or as beautiful as those in, say, Manon Lescaut, but they provides moments of display stunning even the least musical members of the audience. Fortunately, Kaufmann is a genuine artist, who doesn't do things just for show. He creates the part with his singing, suggesting much more depth and complexity than the composer might have dared to imagine. This Andrea Chénier is a bad boy, a rock star, an outsider who writes poetry in an age of violence, yet he has the finesse to entrance a posh girl like Maddalena di Coigny. . After that "Un dì all'azzurro spazio" I was smitten, too. 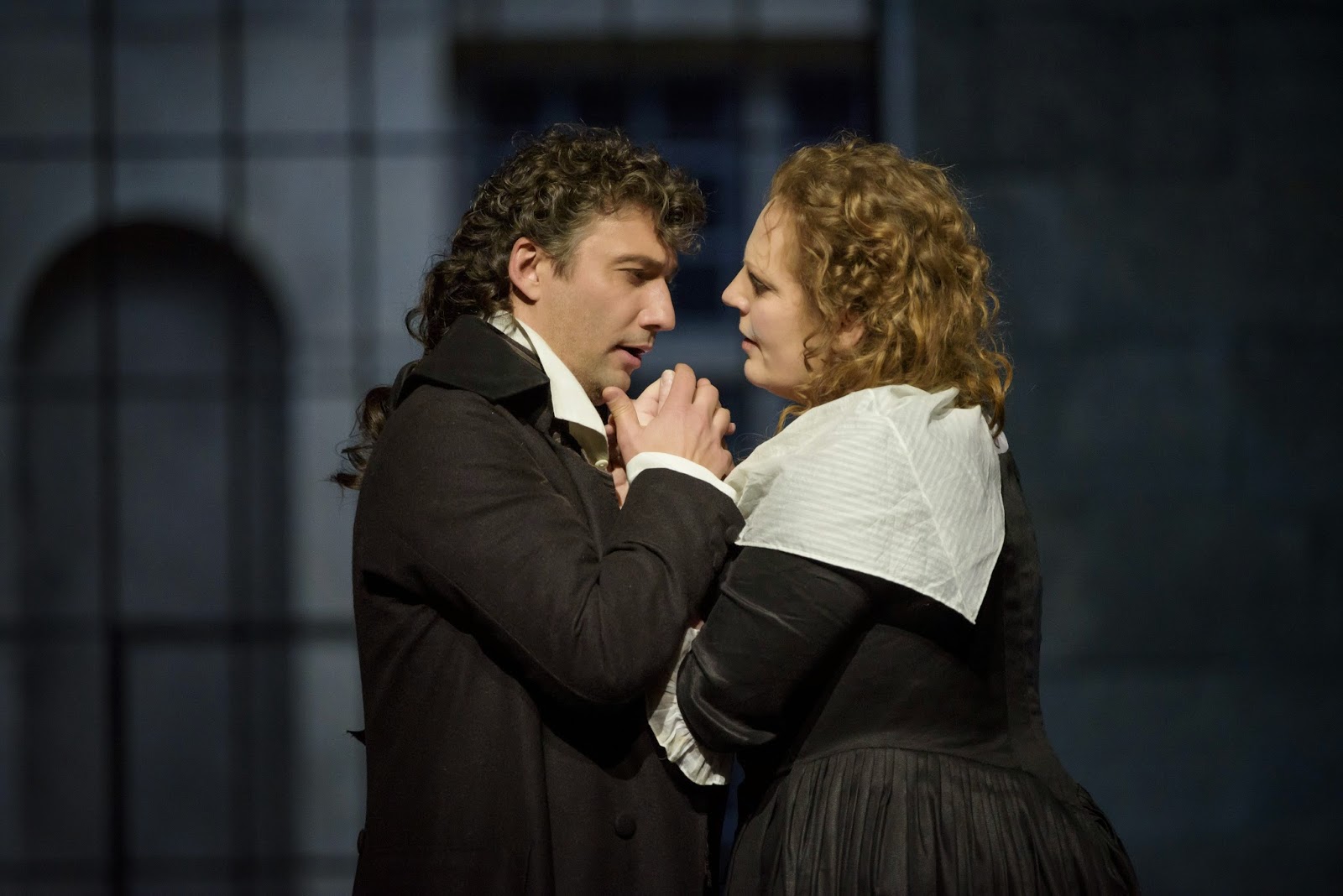 Slight as Luigi Illica's libretto may be, the story deals with cataclysmic events. The French Revolution was such a watershed in world history that it creates a powerful backdrop that it saves the opera from itself. Because know what the story, we can fill in the emotional extremes without much effort, but singing this impassioned helps a lot. Eva-Maria Westbroek is a house favourite because she makes all her roles feel personal: her Maddalena  seems full-hearted and full-throated even before she dresses up for the ball. Westbroek  brings out the feisty woman behind the fancy veneer. Giordano may emphasize the love story, but the French Revolution happened for very serious reasons.

Elegant as the  Ancien Régime might have been, it was a system based on inequality and the abuse of wealth. Carlo Gérard  (Željko Lučić) rages against the cruelty that has worn his father down. Lučić's singing was so intense that he made it clear, that, for all the prettified décor of this set (designed by Robert Jones), the past was a hideous sham. The pastoral dance shows the rich pretending to be the peasants whom they exploit: dance is a metaphor for regimented group-think.  The servants have lovely costumes (Jenny Tiramani) but these are uniforms, only prettier than prisoners or soldiers might expect. It's also not for nothing that Bersi (Denyce Graves) is black. These things happened. 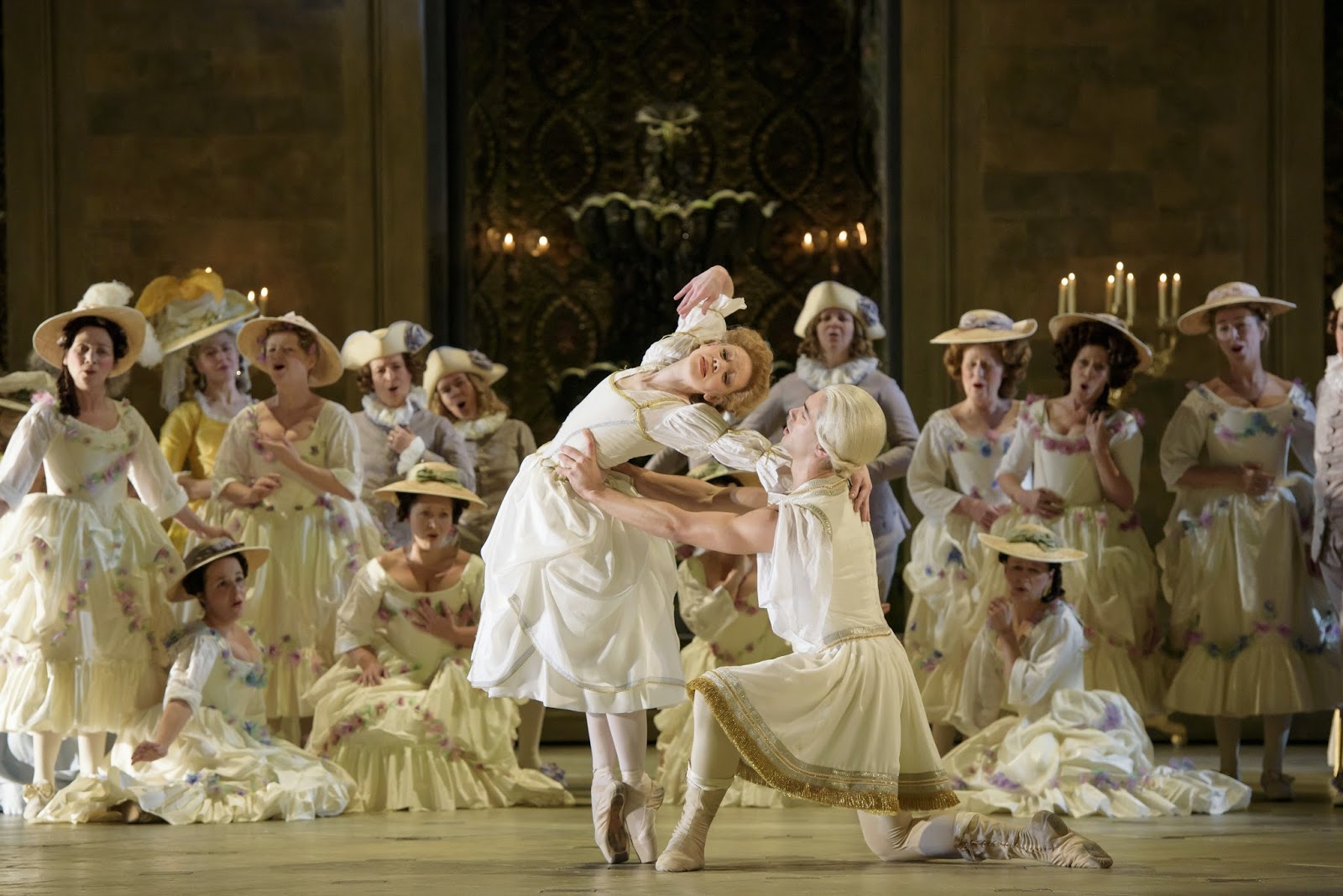 This production is visually stunning – chandeliers in the middle of the field of vision,  roccoco mirrors, colour co-ordinated designer clothes even for the mob in the court room. So much for the ideals which Chénier stood for.  This Andrea Chénier is most certainly "Regie" because every production, no matter how banal,  is a form of interpretation of meaning.  David McVicar "decorates" but misinterprets meaning.  The Revolution happened because, for a moment, people realized that superficial appearances deceive. It says much about modern society that people nowadays treasure trappings over truth. A man behind me kept talking loudly, bursting into insincere autopilot bravos and bragging about himself.  Never before have I experienced behaviour as boorish as that, especially not at ROH.  If he really did know opera as well as he claimed to, surely he might have noticed that the implicit values of Andrea Chénier are quite the opposite?

Fortunately, Željko Lučić sang with such dignified fervour that those who go to opera to listen would have appreciated the depths inherent in the drama which this staging did so much to nullify.  Kaufmann gets star billing, for good reason, but Lučić reached the true emotional depths. A big cast, young singers as impressive as the older ones.

"Basically, it's a pot boiler even by opera standards." Hehe. "Even."