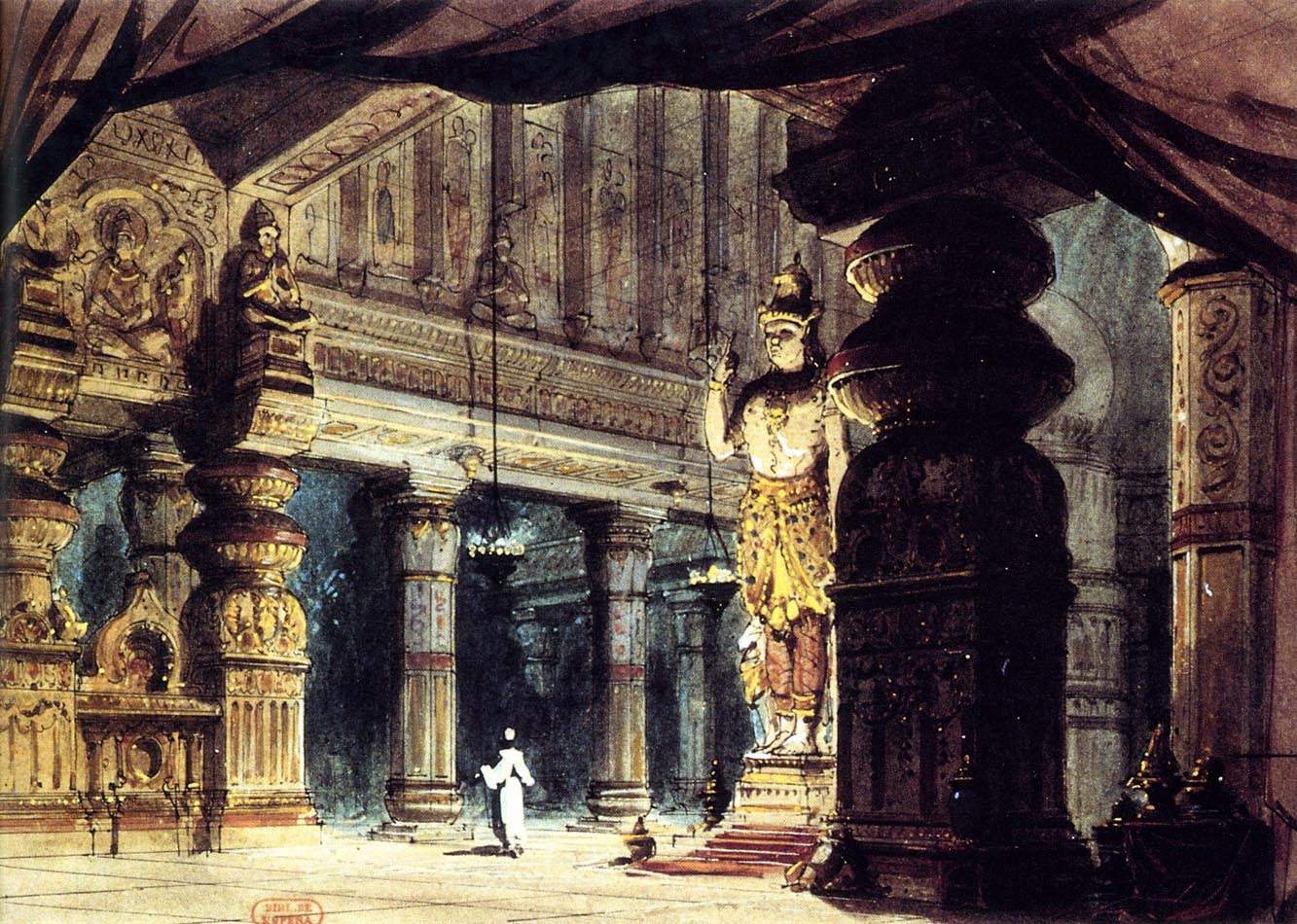 In Jules Massenet's Le roi de Lahore,  King Alim returns from the dead, redeemed by love. On Sunday, the Chelsea Opera Group brought the long-dead opera back to life at the Queen Elizabeth Hall, London.  The opera was a smash hit from its premiere in April 1877. Fifty-seven performances followed, in several productions, in France, Italy, London, St Petersburg and Buenos Aires  Then, suddenly, silence until the first shoots of new interest in the early 1960's. The present reincarnation began with a new edition by Marcello Viotti and a ground-breaking production at La Fenice, ten years ago. (Read more HERE).

This enthusiastic performance by the forces of Chelsea Opera showed what made Le roi de Lahore an instant success. It was created as a showpiece for the then new Palais Garnier, built to flaunt the confidence and wealth of the Third Republic, and also its new empire in Africa and Asia. To quote Simon Bainbridge's notes for the Chelsea Opera Group, the premiere was "an occasion of almost unimaginable splendour..... the costumes alone cost 200,000 francs."  It was so spectacular that the stage designs were published, and photographs taken to preserve it for posterity. The picture above shows the Act V scene in Indra's temple. The deity dominates: all else is dwarfed. Perhaps this very grandeur might explain the opera's eclipse. Like a juggernaut it mesmerizes by its sheer audacity. Yet six years later, Délibes's Lakmé premiered at the Opéra  Comique, combining spectacle with even more spectacular music and songs which remain immortal today.

The Grand Overture whips up promise for grand things to come. Massenet's instrumentation calls for  fashionable "new" instruments like three saxophones, and the giant Adolphe Sax contrabassoon, plus an unusually large range of percussion, which includes antique cymbals, Indian drums and a large Indian gong.  This artillery provides great special effects  and must have sounded wildly exotic at the time. Even in  a non-staged performance, this Indian flavouring whips up mental images of a busy temple, packed with worshippers, wild horns and drums beating incessant rhythms. The Battle Scene in the desert is even wilder, with off-stage trumpets (attackers) and on-stage brass (defenders)  Huge ostinato - did French audiences assume Punjabis fought with elephants? The London audience were thrilled, and that's what matters. The three divertissements for dancing  were less atmospherically written, apart from the second, which might have inspired swooping and lilting choreography. Tantalizing hints of flesh under saris, perhaps, to please the balletomane faction.  Since Sitâ is Scindia's niece, the plot even by non-western standards is a little risqué.

Renato Belsadonna is best known as the Chorus Master at the Royal Opera House,  so he was an ideal choice to conduct Le roi de Lahore, where the choruses play a critically important role. The Chelsea Opera chorus and orchestra are good, though nowhere near ROH standards, but Belsadonna's verve  makes them respond with such enthusiasm that they create the right kind of wayward atmosphere, much more in the spirit of this opera than over-refinement, though we could have used more luminosity in the Act III Paradise chorus. This isn't a plot for deep introspection. Besides, crowds in temples, battles and market places wouldn't sound right, drilled to perfection.  We came for the fun of the opera, and Belsadonna gave us adventure, without lapsing into the kind of noise-for-the sake-of-excitement that prevails all too often in concert halls these days.

Wedged between Bizet's Pearl Fishers and Délibes' Lakmé, Le roi de Lahore doesn't compare. The principals aren't really given enough material to display what they can do. Michael Spyres sang Alim with ardent fluency, hitting the high notes with athletic grace. Would that we could have heard more of him,  but this isn't really a numbers opera.  Anush Hovhannisyan sang Sitâ. The awkward extremes in the range pushed her, but she had lovely mezzo-ish tints, suggesting that Sitâ, despite her youth, has an instinct for passion. Hovhannisyan is beautiful.  as befits a girl men would die for. It's no fault of the singers that modern audiences can't forget The Bell Song from Lakmé or The Flower Duet. Justina Gringyte sang Kaled well, a part written with interesting spice.   William Dazeley as Scindia has a lot to sing. If Dazeley's voice was a tad dry, that worked fine for a villain, especially one who preys on girls and kills his King. Scindia and Timour are great characters. As Timour, the High Priest, Jihoon Kim creates a figure of authority with the depth of his timbre, but also colours his singing so that we can feel the depth of Timour's personality. This Timour is a man who cares about people even if it means going against the rules. An excellent portrayal. Kim will make a good Heinrich or Marke, in the not-too-distant future. Robert Lloyd was slotted to sing Indra, but had to cancel. Joshua Bloom saved the day, singing both the Army Chief and Indra, standing high amongst the chorus. Please see my other posts on Massenet, including Hérodias, as well as Manon and Werther.
at March 02, 2015