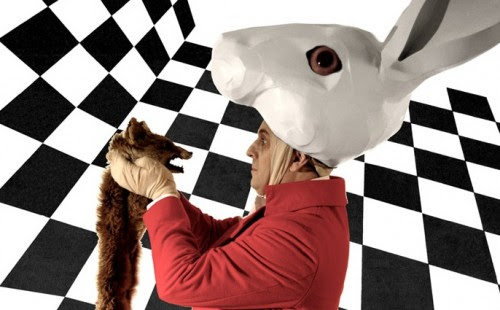 Unsuk Chin's Alice in Wonderland  returned to the Barbican, London, shape-shifted like one of Alice's adventures.  The BBC Symphony Orchestra was assembled en masse, almost teetering off stage, creating a sense of tension. "Eat me, Drink me". Was Lewis Carroll on hallucinogens or just  good at channelling the crazy world of the subconscious?   Unsuk Chin's take on Carroll, with David Henry Hwang's libretto, emphasizes the madcap mania of the original, where nothing is what it seems and Reason is Irrelevant. This Alice in Wonderland is anything but prim.  It's zany, anarchic and subversive, and also hilariously funny.

With her music, Unsuk Chin builds ambitious architecture, vast grand edifices that stun by their sheer scale. This new version, with Netia Jones's semi-staging and Lloyd Moore's re-orchestration, reveals the strong, basic structure, releasing its manic, kinetic energy.  Jones's direction and designs buzz with wit and colour. Video (Lightmap and Netia Jones) is good at depicting impossibilities, like the vanishing Cheshire cat and his enduring grin. The interplay between video and reality is so good that it's quite unsettling, which amplifies meaning.  The illustrations are by Ralph Steadman: no trace of twee. When the Mouse (Christopher Lemmings) is condemned,  the crowd shout "Disneyfy him!" A fate worse tha death.

Kent Nagano conducted Unsuk Chin's original score in Munich eight years ago, but not all houses have such resources. Thus Los Angeles Opera commissioned a version that's easier to carry off and tour. Lloyd Moore is sensitive to the spirit of Chin's original. By reducing the number of players, especially in the strings, the inherent liveliness in the music is liberated. The choruses (BBC Singers, Tiffin Boys Choir)  are still big, though not quite the 40-60 singers specified in the original  The emphasis is thus on the quality of Chin's instrumentation rather than sheer volume. Chin has a passion for imaginative use of unusual instruments. The score employs "kitchenalia" which means just that - alarm clocks, wind chimes, tweet and crackles and pops. Vivid combinations, such as when the violins  are plucked, extending the sound of the mandolin. In Scene Two, The Pool of Tears, the image of water is created by celli and basses, bowed with maximum depth, creating a drone that's both mournful and mysterious. The Caterpillar sings, wordlessly. He, whose very existence depends on changing shape and form, is represented by a single instrument, the bass clarinet, which, oddly enough, looks like a metal caterpillar. Baldur Brönnimann conducted the BBC Symphony Orchestra. He's a new music specialist,. alive to the quirky possibilities this music offers.

Unsuk  Chin's vocal lines are counter-intuitive to syntax, often also running counter to the orchestra. Text turns to tongue twister. Yet again, that's part of the concept of shape-changing instability.  It's not easy to carry off well, though.  Rachele Gilmour sang Alice in Los Angeles, which is perhaps why she was cast again in London. Andrew Watts sang the White Rabbit, Badger and March Hare in Munich and in LA, and is perhaps the most important countertenor in his field, and the most experienced. He was divine, capturing the jagged edges of his parts with demented aplomb, not only with his unique voice but also with his body language. His White Rabbit camps along, prissily wiggling his large rabbit behind: totally in character. A tour de force.

Marie Arnet's Cheshire Cat was sung with spirit and spice. Perhaps the cat knows that the way to survive in this crazy world is to grin, even when all else fades.  Jane Henschel was in superb form. Her Queen of Spades was gleefully wicked, laced with shrill but well controlled vitriol, and she made it sound like fun.  Dietrich Henschel sang the Mad Hatter, using the metallic tension in his voice to good effect. Impressive Christopher Lemmings Mouse, Dormouse and Invisible Man. Stephen Richardson, a British stalwart, sang the King of Hearts, while the other smaller parts were taken by American singers, from the LA production: Andrew Craig Brown, Rafael Moras and Nicholas Brownlee.

This concert will be broadcast on BBC Radio 3's Live in Concert on Saturday 11th July at 7.30 pm and available for 30 days after broadcast on the BBC Radio 3 website and BBC I Player Radio

This review also appears in Opera Today, where there is also a review of the Munich production. Please see my other posts on Unsuk Chin and on new music and stagecraft
at March 09, 2015