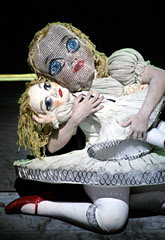 Tonight, a brilliant new version of Unsuk Chin's Alice in Wonderland at the Barbican, London. My review is HERE..

Meanwhile, a link to the review in Opera today of the original production, in Munich in 2007.  Opera Today is an excellent source of background material. This review is informative and  useful. The opera was originlly created for Los Angeles, but didn't eventuate, so the Bavarian State Opera took it on instead, conducted by Kent Nagano and directed by Achim Freyer. A film of this production was shown at the Barbican's Unsuk Chin Total Immersion some years ago. It's the one where the characters are dolls with giant see-through heads. transparent heads. When Alice realizes it's all a scam she removes hers. "Off with their heads!" in every sense. I liked the Freyer production a lot, but was less impressed by the music.

This time round, at the Barbican, my views have changed again .What a difference! The new semi-staging, by Netia Jones, and the new orchestration, by Lloyd Moore, reveal the true depths of this opera. Unsuk Chin's good at building vast grand edifices.  Created for Los Angeles and premiered there last year, the new production clarifies the strong internal structure. The music emerges as an elegant puzzle , rather like one of M C Escher's architectural conundrums, where stairways connect or don't connect, and corridors lead to dead ends or new beginnings.

A lot like the concept behind David Henry Hwang's libretto, where Alice enters a surreal world where nothing makes sense, and every assumption is turned on its head. Or "Off with it! " as the Queen might scream. Much zanier than Lewis Carroll, though it makes one wonder what he was drinking and eating. Not, most thankfully, Walt Disney's Alice in Wonderland. Indeed, when the Mouse is condemned, he's sentenced to be "Disneyfied", a fate worse than death.  This time round, the energy is far more manic, and far more surreal.  I loved the crazy humour in the instrumentation (another Unsuk Chin trademark)  Last time round, there was a family complaining that this wasn't the Alice in Wonderland they'd taken their kids to see. This time there was a warning "Not recommended for under 12's". Conversely, perversely, I think under 12's would respond positively to the anarchic ,mayhem.  Pity the show started at 7.30, not, as originally planned, at 7. which meant it ended very late.  By the time most people commuted home, it was way past bedtime.
at March 09, 2015