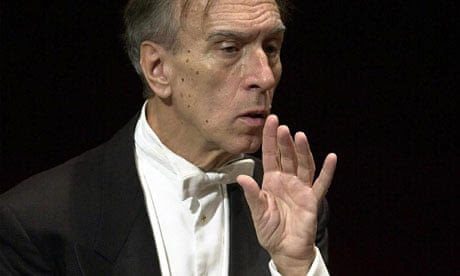 Hearing the silence ?  I've been watching the documentary Claudio Abbado: Hearing the Silence, by Paul Smaczny, available through Euroarts.  It's been available for 15 years or so, but still worth revisiting.  Some will be aghast at the very idea of "hearing silence" but I think true  music lovers will understand.  When we "listen to the silence", we're making space in our souls for real music, not muzak.

Abbado had "the most beautiful left hand I've ever seen, says" Daniel Harding, who went to work with Abbado aged 19 and was part of Abbado's elite Mahler Chamber Orchestra. "It's like (he was) massaging something that already exists, ..he's almost not 'making' it but allowing it to happen and then moulding it..... you get the feeling that the music is a physical presence you can actually touch and manipulate."  Albrecht Mayer, principal oboe at the Berliner Philharmoniker says "You see a movement of the hands, and you change automatically - you change yourself, not just the way you play".

That phrase "changing yourself" is critical. Abbado inspired his players to listen to something other than themselves. Abbado is quoted as saying he liked audiences that didn't rush to applaud. These days long silences have become a silly cliché, but I think what Abbado meant was the genuine silence that comes when an audience is really listening and thinking about what they've hearD. Nowadays, we've become locked into the idea of like/not like, as if the world were a Facebook meme. But great art exists in an altogether more rarefied place, something eternal that stretches the depth of human experience. Like/dislike is irrelevant: what matters is what you've learned from the experience.

"What  drives me is the love of my job" says Abbado. "and the passion for things I find inspiring, when I get a chance to immerse myself , to deepen my knowledge of a score, or a book". Abbado, who knows scores better than most, still learning? "If I can deepen that knowledge, I will always do so...  the starting point is always love". .

There's a clip from a rehearsal of the famous Lucerne Festival concert in 2003, which Abbado conducted after his near fatal bout with cancer. He looked  gaunt, since his half his insides were gone.  But he was conducting Mahler Symphony no 2., truly  a heartfelt resurrection.  No-one who heard it could ever forget. Even without knowing the background, this was a shattering performance.  One of  the secrets of Abbado's genius, especially in later years, was that he didn't take things for granted but aimed for the highest possible standards of excellence. That excellence came from choosng the finest players, and players who could work together so well that even in large ensemble, they functioned like chamber players, listening to each other. "Hearing the cross currents", as Mayer says, "not cobbled together like patchwork".

"There are no limits", Abbado is heard saying "(music)  is an ongoing process, a constant quest, a quest for new forms of music-making, a permanent state of enrichment. You arrive at a certain point and you have to go on from there"  .These days when hate, wilful ignorance and intolerant egotism seem to be taking over the world, I think we need Abbado's ideals more than ever.  As Elly Ameling once told a masterclass, "We are here for the music, and not the other way round".