Lam Kar Sing has died. Imagine if dozens of big names in the western opera, film, drama, popular music,  historians, athletes and arts names all dropped dead at the same time? That's how significant Lam was to Cantonese culture. Western audiences assume that high art and popular entertainment don't mix, reinforcing the myth that high arts are "elitist". Eventually that mindset will kill the arts, because dumbing down destroys the very excellence that makes high art great. So Cantonese opera represents an alternative to perceived ideas on the integration of "high art" into society.

Lam Kar Sing began his formal training at the age of 8. Cantonese opera isn't just about singing.  Physical and mental discipline are part of the craft,  since movement and gesture are integral to the expressiveness of the art. Hence the connection to martial arts, which aren't about fighting per se but themselves connect to spiritual values like justice, support for the oppressed (a typical theme inn martial arts movies, for example).  And to good physical health!  The moves opera singers use reflect the moves of qigung, with its emphasis on the harmonies of the body. Not for nothing kung fu masters often practised herbal medicine. Chinese opera doesn't need ballet interludes, it "is" dance in its deepest form.

From these foundations, the "art" side of opera grew. Chinese opera wasn't notated. People learned by watching masters, absorbing the spirit of the art. Although the genre may seem stylized, it thrives on improvisation. A basis of percussion holds the music together, from which the singers can use familiar tunes. Much of the delight lies in the way great performers individualize their work, and adapt what they sing to new situations. Hence the development of new forms of the genre, like opera adapted for the movies, where the rhythmic spoken recitative that's so much a part of  Cantonese opera comes into its own as drama. A good basic plot is acted, like in any drama, but the singers develop their own words, within reason, sometimes alluding to things way outside the plot. Tunes are borrowed from all over. Jingle bells, for example, pops up even in "formal" opera  the spoken parts, as much as the singing, reflect the beauties of a dialect that has nine tones, which can be coloured in subtle ways. There's lots on Chinese opera on this site, please use the labels below to explore.

Chinese opera .long  pre-dates western opera. its origins lie with the literati, the educated scholar class. Kunqu operas quoted huge chunks of classical literature and history, which audiences got  because that was part of the cultural vocabulary. Obviously, not everyone was educated, or even literate. Thus the proliferation of regional adaptations, built on a background of familiar basic stories and styles.  Opera thus became part of "popular" culture. Read more on this site about traditional "pop up" houses and communal celebrations.  No question of "dumbing down" though.  Different troupes competed, and great stars were (and are) idolized because they did good, innovative work. (Photo shows Lam Kar Sing as Monkey.) 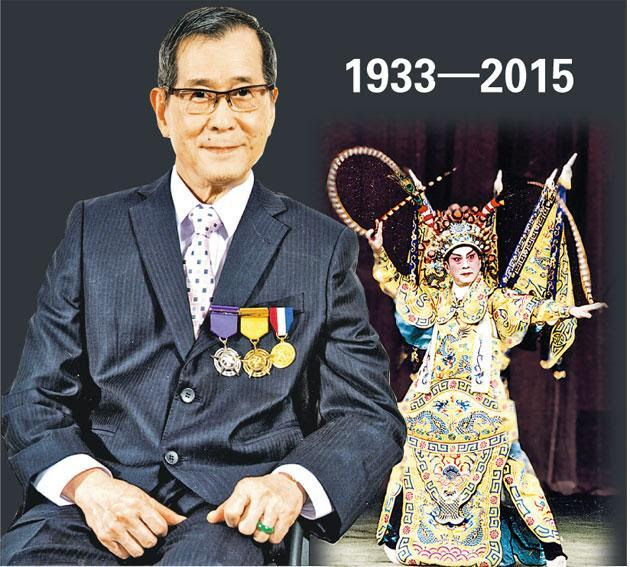 And thus back to Lam Kar Sing. He was uncommonly good at all aspects of his art. He could sing, and act, brilliantly, the merest tic of a muscle infinitely moving. He sang formal traditional opera, but also variants and "straight" theatre, including modern drama.  His martial arts movies are "high art" with their historical and literary allusions,  a far cry from the crude violence that kung fu movies sometimes descend to. But even those connect to Chinese history and culture and to modern life. For more details on Lam Kar Sing's life and art, please read these articles HERE and HERE   A friend, who followed Lam's career since they were both young men, told me what Lam was like away from the camera. genuinely personable, kind and humble, who loved his art and culture. That's why he was so much loved in return.
at August 07, 2015