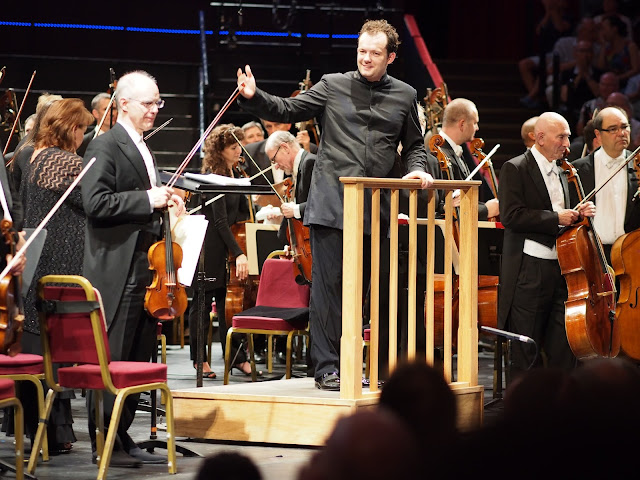 For Prom 49, Andris Nelsons and the Boston Symphony Orchestra at the Royal Albert Hall. It's been eight years since the BSO last came to London, with James Levine. Some of the players may even be the same personnel. But eight years is a long time, during which Levine has been seriously ill. So it was a wise move on the BSO's part to bring in Nelsons as Chief Conductor.  He's  a stellar Wagnerian who's featured at Bayreuth, so closely connected to the Berlin Philharmonic that he was a contender for the top job there. He's the prize racehorse in his field.  Music doesn't stand still. Good orchestras can rise to the challenge.  As in so many cases, change takes time. Fortunately, the BSO has Nelsons contracted until 2022.  Europe's loss might be America's gain.

Earlier this week, Nelsons conducted the opening night of the Lucerne Festival, one of the sacred places of European music, still  hallowed by Claudio Abbado. Lucerne Festival players are the best in the business, individually hand picked, for their personal standards of excellence.  The Lucerne ethos of orchestra as chamber ensemble predicates on these high standards. very different from perfectly normal  orchestral experience.  Enjoy the Lucerne concert HERE. .

At Lucerne, Nelsons conducted Haydn's "Surprise" Symphony and Mahler Symphony no 5, both well suited to the intimacy of Lucerne, and performed with the intensity and spark of an ultra-chamber unit.  In London, at the Royal Albert Hall, Nelsons conducted Mahler Symphony no 6 and Brett Dean Dramatis Personae. Unlike so many Brett Dean pieces which rely on non-musical gimmicks, this piece has better musical foundations. The presence of Håkan Hardenberger certainly helped.  He's not stretched and the piece could probably work fine with lesser players. The ideas are undemanding and Dean's thing for cute visuals gives it appeal.

In Mahler 6 Nelsons and the BSO followed the Allegro moderato with a surprise : Scherzo  first, Andante Second.  The controversy on the order of movements is somewhat pedantic.  If it were easily settled, it wouldn't be an issue. Most of us grew up with Scherzo-Andante and it did us no harm. Three years ago,  Chailly conducted Andante-Scherzo with the Leipzig Gewandhaus Orchestra, and that worked fine, too, because it capitalized on the legendary warm glow the Leipzigers do so well, so the contrast with the Scherzo felt heart rending. Nelsons' order worked better with the BSO because it injected dramatic urgency into the symphony sooner rather than later. The Andante felt like a gentle Ruckblick, a wistful looking back on gentler times. Hence the cowbells, clearly audible on this occasion from where I was sitting. Mahler wanted them heard "as if from a distance" -- easier said than done in practical performance. When Semyon Bychkov conducted Mahler 6 in 2011, with the BBC SO, (more here),  he made the Andante seem haunted, rather than peaceful.  Nelsons' approach is more conventional, but makes more of the BSO's good string sections. Nelsons' Finale was suitably haunted though, the strings and harps creating a chilling, "icy" character from which the violent march returns.  The hammer blows fall, but the trumpets herald a future beyond.  the March here isn't military, but the march of life, itself.  It's not necessarily "tragic"or maudlin. This connects to the ideas of life-affirmation, so closer to the deeper understanding we now have of Mahler's overall idiom. In the last section, Nelsons lets the BSO rip. Good contrasts, suggesting tension, but also inexorable forward movement. In many ways, this symphony suggests hope, and triumph over death. Certainly, this Prom suggested a bright new future for Nelsons and the BSO.

Love your Scherzo-Andante comment! Did me no harm either. To hear the way the pedants done on about it, you'd think the future prosperity of the planet depended on the order of the movements in Mahler's sixth.