At Prom 55, François-Xavier Roth  conducted the SWR Symphony Orchestra Baden-Baden and Freiburg in their first - and regrettably last - appearance at the Royal Albert Hall.  The orchestra is being disbanded, merged into the Stuttgart Radio Symphony Orchestra. When bureaucrats win over musicianly excellence, even in Germany, it's a blow against art.  Those who stand by watching the BBC being dismantled, from within as well as from without, would do well to ponder. The SWR Symphony Orchestra isn't just another orchestra. It was founded by Hans Rosbaud in 1946, as a statement of faith in the renewal of Europe after the barbarism of the war years. Its demise is thus one of the many symptoms of the anti-intellectual, destructive fundamentalism that's sweeping the world over. .

At the end of this Prom, Roth stood in front of his musicians, declaring his appreciation for them, and for the tradition they represent. It was a gesture of defiance, yet tinged with sadness. Roth is going on to head the Gürzenich Orchestra in Cologne, another of the less famous but distinctive orchestras that make German music great. I'm not sure what will happen to his players, who are individually infinitely better than some heard recently. The Prom was also a tribute to Pierre Boulez, whose conducting career was launched by Rosbaud, who summoned him to Baden-Baden. He's lived there ever since. When Roth conducted Baden-Baden's concert for Boulez this January, the presenters and audience looked visibly moved.


Nothing routine or sloppy in this Proms performance. Pierre Boulez "....explosante-fixe" (1985) scintillated because Roth and his orchestra respect the music enough to create it properly. With his background in baroque, Roth knows the connection between baroque and new music. Please read more here.  One of the hallmarks of the French aesthetic is lucid intelligence. Think Descartes, Moliere, Voltaire. Complex elaborations need clear basic foundations.  Debussy's swathes of subtle  colour sparkle because he understood the importance of clarity. It's no accident that Boulez was perhaps the finest Debussy interpreter of all.

The original  "Mémoriale ...explosante-fixe" was written to honour Stravinsky, but the larger 1985 version also honours Debussy. The soloist is now surrounded by two other flautists and a small ensemble, so we can hear the purity at the soul of the piece. This is one of the relatively rare pieces where Boulez extends his palette with electronic effects, but these didn't come through as effectively as the "acoustic" playing, perhaps because I was sitting in the wrong place. Impressionist painting shines because colours are carefully defined by light, not muddied.  "....explosante-fixe" is impressionistic in that individual units are clear, the rainbow created by good players for sensitive listeners. Sophie Cherrier combined technical excellence with sophisticated élan. I thought of Pan, surrounded by purity, an image behind the original Mémoriale and in Debussy Prélude à l'après-midi d'un faune.

The technical excellence of the SWR Symphony Orchestra made György Ligeti's Lontano shimmer, like "music from another planet".  Like Ligeti's Atmosphères, this reached mass audiences thanks to being "borrowed" for the movies. So nuts to the myth that audiences are hard wired not to cope with new music! I got hooked on Ligeti when I heard 2001: a space odyssey, hypnotized by the music, ignoring the movie. Lontano was premiered by the SWR SO, whose players remembered the importance Ligeti placed on precision. The textures are so complex that they benefit from the careful attention Roth and his orchestra gave to them.  Roth marked the invisible bars, showing how the music doesn't simply end when the players stop. The silence evaporates into the ever more rarified resonances of the imagination. 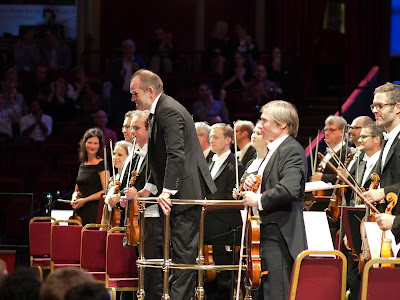 It's a mistake, I think, to expect  Béla Bartók's Concerto for Orchestra to sound quaint and folksy. In 1940, the composer was looking back on his past well aware of what was happening in the Europe he'd left behind, and in the  right wing extremism in Hungary, whose government aligned itself with Hitler. At this Proms performance the SWR SO played it so well that they brought to the fore the atmosphere that Bartók might well  have intuited: the end of civilized culture.  This isn't a concerto for orchestra for nothing, since the interactions between the different parts of the orchestra suggest the importance of relationships and cross-connections.  Roth and the members of the SWR SO listen to each other: their starting point isn't their own playing but precision and attentiveness . Boulez conducted Bartók's Concerto for Orchestra many times.  Ten years have not dimmed the memory of him  conducting it at the Royal Festival Hall with the Chicago Symphony Orchestra.. Bartók's Concerto for Orchestra was commissioned for the Boston Symphony Orchestra by Serge Koussevitsky. As the present BSO embarks on a new future, they might do well to listen to Roth and the SWR SO.