The Eternal Gospel was written in the period around the First World War, when the destruction of the old order did seem apocalyptic. When it was published in 1917, Janáček was poised between his "old" style of writing and the breakthroughs he'd reach with The Diary of One Who Disappeared and what was to follow. The link to  the Glagolitic Mass is obvious, but perhaps without the incendiary  The Eternal Gospel we might not have the major operas, either. The composer's infatuation for Kamila Stösslová is usually cited as the source of his late-age blooming, but why shouldn't the inspiration go deeper than that?  Janácek was a passionate nationalist and Pan-Slavist at a time when national identity was a matter of life-or-death struggle. Based on a poem by Jaroslav Vrchlický, itself based on The Book of Revelation (and the end of the world)  it describes a vision in which an angel appears to a monk, foretelling a New Age of universal love. This "eternal gospel" isn't about personal love but the love of higher, impersonal ideals. The “Allelujahs!” here aren’t religious, but political.

The Eternal Gospel isn't a rarity: Vladimir Jurowski conducted it in London in 2010   with Adrian Thompson, who also recorded it with Volkov for Hyperion.  Netopil perhaps doesn't quite have the finesse of Jurowski, but his soloist, Pavel Černoch, sings with the pungent punch of a native speaker. The recording with Beno Blachut (conductor Jiri Pinkas) remains, I think, the benchmark, though  I've just discovered Nikolaus Harnoncourt, of all people. Harnoncourt's violin soloist is superb, and the strings glorious. Netopil's violinist is very good, though not as accomplished as Harnoncourt's (who may be the Leader of the Vienna Philharmonic Orchestra). Netopil's account is more vigorous, and his choir infinitely more idiomatic, as one would expect from the Prague Philharmonic Choir, who have Janácek in their DNA. What a heroic epilogue - the female chorus like a chorus of angels.

Netopil conducts the original September 1927 version of Janácek's Glagolitic Mass not the version adapted for practical reasons of performance. Janácek's revision is easier to perform and probably more popular for that reason. When Pierre Boulez conducted the original version, in the then brand-new Paul Wingfield edition, at the BBC Proms in 2008,  the performance was so intense, and so convincing that, when Jiri Belohlavek conducted the "standard" version at the first Night of the Proms in 2011, some listeners went ballistic, blaming the conductor, not realizing that it was the composer's "fault". There's absolutely no reason why both versions aren't valid - the earlier version has a delightfully rough-and ready-quality which fits well with the idea of period performance. Until relatively recently,Janácek's music was often heard in adaptation and works fine. 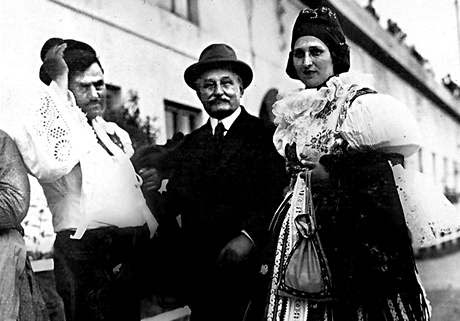 The original Glagolitic Mass, though, reveals its true glory.  For one thing, it begins with an Intrada, with which the piece ends. The two Intradas aren't mirror images, but form a magnifcent frame  for the piece. As Janácek said: "My cathedral " was “the enormous grandeur of mountains beyond which stretched the open sky…...the scent of moist forests my incense”. These masses were held in the open air, with trees instead of stone as buttresses. Hence the idea of freedom and liberation, which is closer to Janácek's intentions than to a religious interpretation.  As "abstract art" it's amazingly lively and inventive. Janácek's creative imagination years ahead of his time. If we care about the composer, we need to care about his vision.  The original  Glagolitic Mass is craggier, more dissonant and more abrasive, but it's also closer to the composer's singularly individual vision. It's also more dramatic, harking towards the much underrated From the House of the Dead.  Janácek loved folk tradition but he wasn't "folksy".

Although the original version has been recorded several times, (Mackerras and Boulez in his 2000 recording ) Netopil is not using the 2011 edition. Please see my review of the Gergiev 2014 Prom here.  Netopil, who's 40, hasn't quite the audacious flair of Boulez and Gergiev, both of whom had enough experience to rise to Janácek's risk-taking challenges. The crazy exhilaration of the final Intrada doesn't levitate in quite the same way.  Nonetheless, this version of the Glagolitic Mass is so compelling that it's a joy to listen to. But I'd really like to hear the brilliant  Jakub Hrůša (age 34) do this: he'd be amazing.
at August 16, 2015