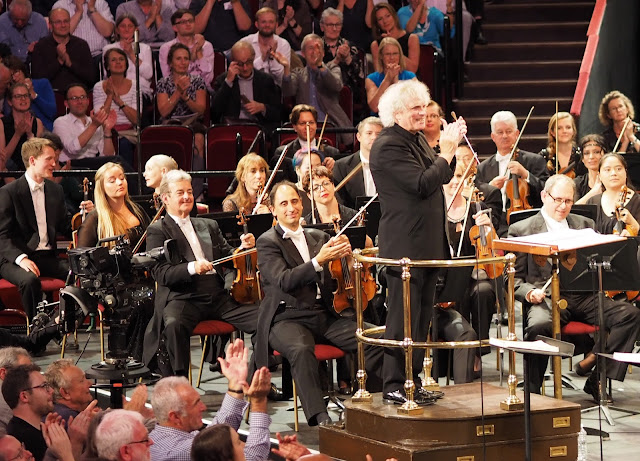 Prom 46, Schoenberg Gurrelieder with Simon Rattle and the London Symphony Orchestra, Simon O'Neill, Eva-Maria Westbroek, Karen Cargill, Peter Hoare, Christopher Purves and Thomas Quasthoff.  And three wonderful choirs - the CBSO Chorus, the London Symphony Chorus and Orfeó Català from Barcelona, with Chorus Master Simon Halsey, Rattle's close associate for 35 years.  No wonder tickets almost sold out as soon as they went on sale. Everyone in town seemed to be there. Thomas Quasthoff sat in the coffee shop, holding court with friends and fans. Simon Rattle got cheered when he came in  sight on the stage, still in street clothes, by Prommers who were already seated half an hour early.

Gurrelieder is a spectacular so extravagant that, for maximum effect, it needs to be experienced in a performing space where the vast forces can let rip in all their glory.  Rattle has conducted it many times in many places,  but there's nothing like the Royal Albert Hall for sensational presence, so he was able to unleash the full forces of Gurrelieder without inhibition.  For Gurrelieder is meant to be overwhelming, Waldemar defies God, who wreaks cosmic vengeance. He and his men are doomed to spend eternity riding through the night in a hunt. The peasants (here a single symbolic figure) are terrified by the supernatural, but Klaus-Narr, being a Fool, can recognize the ghosts for what they are - cosmic forces, and the demonic power of Nature.

Gurrelieder starts with a rhapsodic prelude, string lines swelling and heaving, harps adding warmth, woodwinds delicate, naturalistic touches. The reference is probably Siegfried's Journey down the Rhine, for Waldemar is about to embark on a journey of destiny.  Like Siegfried, Waldemar spends his innocence hunting in the woods, where Tove is concealed.  Hence the Wood Dove, like the Wood Dove in Siegfried, an all-seeing avatar.  Dense forests, in Germanic culture, symbolize powerful, though sinister, primeval forces.  The subconscious, source of creativity and danger.   Gurrelieder is  song symphony of Wagnerian proportions.  Simon O'Neill, being a very experienced Wagnerian, brought dramatic authority to the role. Waldemar is no Tristan but a king who thinks he can throw curses at God. If anything, he's a Flying Dutchman, doomed to sail the seas forever.  O'Neill's Waldemar is an embattled soul, tormented and defiant, instinctively understanding the part.  Waldemar is not a Romantic Hero, but a man cursed, struggling against Fate. Thus the roles of Waldemar and Tove, though well written musically, aren't particularly well developed in  terms of psychological complexity.  For Schoenberg, they are figures in a landscape, who will become incorporated into Nature and nature legend around them.  Nonetheless, Eva-Maria Westbroek created Tove with great vocal depth,  and Karen Cargill sang the Wood Dove, a bird of darker portent than Siegfried's wood dove.

Schoenberg was only twenty-six when he wrote what was to become the First Part of Gurrelieder, but in the interim, he developed a highly original identity. In Part Two, the harps still sing, but the sweeping strings are broken by fearsome chords  which replicate the word "Herrgott! Herrgott!" which O'Neill sang with intense flourish.  Note the text, carefully.  Waldemar accepts his fate, but frames it as a creative destiny.   He chides God. "Das heisst Tyran, nicht Herrscher sein!". Like any earthly king, God needs Fools to keep him in order. Thus the significance of Klaus-Narr and of the Narrator, both figures who can see beyond events and guess significance.  In the years between the time Schoenberg began writing Gurrelieder and completing it, he developed a distinct creative identity. The true artist, as innovator, will often be alone, even vilified, but artistic integrity is paramount.  thus "Lass mich, Herr, die Kappe deines Hofnarrn tragen!".

The peasant (Christopher Purves) is horrified by the sight of Waldemar's Ghost Riders in the sky (complete with echoes of hunting horn).  His response is to hide, pray and bolt his door "noch Stahl und Stein, so kann mir nichts Böses zum Haus Herein!"  "Holla!" to all that.  The men's voices in the choirs sing a wild, rhythmic chorus, alternating explosive force with singing of hushed subtlety.  O'Neill sang Waldemar's "Mit Toves Stimme" so it rang out as an anthem: the  love that keeps Waldemar singing is like the inspiration an artists needs to create.


The music that introduces Klaus-Narr  is quirky but pointed, The Fool (Peter Hoare) is himself a ghost, serving his dead King in the same way that his king serves the God who doomed him.  Hoare let the lines curl round his tongue, spitting them out in line with the odd angular rhythms in the music. Waldemar will not be cowed.  Trumpets call, and hunting horns. Waldemar's still a huntsman and fighter who will  barge his way into Heaven. The huge chords in the orchestra return, but fade away, for dawn is about to break.  The Men's voices sang in dramatic hush as Waldemar's men sank back into the grave.  Rattle and the LSO created a haunting orchestral Prelude, settingb the tone for the entry of the Narrator (Thomas Quasthoff). Brooding somnolemce, eddies of quirky sound, like will o' the wisps illuminating darkness.   In many ways, the part is the heart and soul of the piece, for it's written as Sprechstimme, neither song nor speech, a device which Schoenberg was to make distinctively his own. This section is extraordinary, so unusual and so powerful that it leaves the listener stunned.  Quasthoff did the Narrator (and the Peasant) with Rattle in  Berlin in 2000.  Though he's long ceased singing, he can still act, and speak the part with a singer's ear for song.  It's quite a part. I will never forget hearing Hans Hotter do it way back in 1994, when he was already in his eighties.  And then the chorus exploded in that glorious "Seht die Sonne!"

This Prom was recorded for repeat online broadcast, and filmed for TV broadcast on September 3rd (BBC TV 4).

This review also appears - with extra pics - in Opera Today