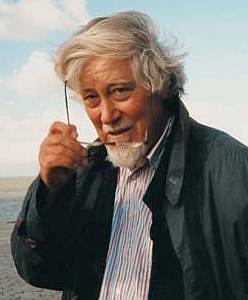 Wilhelm Killmayer died this week, just one day short of his 90th birthday.  Killmayer was utterly unique, even among the many inventive minds in music over the last 60 years.  Killmayer was deeply immersed in European culture, re-examining its soul and creating anew. Listening to Killmayer is like visiting a sanctuary, where the ur-sources of creativity flow pure and clean, endlessly refreshing the artistic imagination.  Think on that idea of an eternally clear fountain, springing from great depths, sparkling in the sunlight.  It captures the spirit of Killmayer's music.  "All that white!" a pianist once exclaimed, looking at a score.

But as Killmayer said, "Silence liberates us.  It helps us to listen to
ourselves. Music can make us forget ourselves. It can also make us
become aware of ourselves."

That's a very zen concept. In Chinese painting, blank spaces are an essential part of composition because they balance literal with imponderable, letting the viewers exercise their minds.  Killmayer's music is luminous,  transparent. and incredibly

beautiful.  It's radical because it's both challenging and intuitive, activating mind and soul.  Killmayer connects to the idealism of Ancient Greece, or rather the German Romantic  reinvention thereof. One of his heroes was Friedrich Hölderlin,  the poet and thinker who crossed boundaries to the extent that he ended up incarcerated at Tübingen in a tower that had been part of the medieval city wall,. He'd sit singing to the moon and writing poems so odd and so spartan that many thought him mad.  Yet Hölderlin's late period has perhaps been even more influential in the 20th century. Perhaps, in his isolation, that 19th century mystic speaks for the modern soul.

Killmayer's two cycles, the Hölderlin-Lieder, (1986 and 1988) are an extraordinary achievement.  Like Hölderlin's fragments, the songs begin and end as if materializing out of the ether.  Some are little more than disconncted phrases or passages of prose which don't make logical sense though their poetic import feels profound.   Strange harmonies, extremely high, taxing tessitura, delicate matching of voice, solo instruments (flutes and piano) and string lines that stretch into space.  Lots of silence, when the music seems to hover unheard except in the mind of the poet. As he listens, we listen too, blanking out the detritus of mindless noise that is normal life.

All this variety, lit by an immaculate but unworldy, unnatural glow,  The word "Greichenland",  for example, suddenly bursting forth, sung with exquisite rapture.  For as Hölderlin glimpses an unattainable, ideal vision beyond reality, we too can ponder a world beyond.  Killmayer's Hölderlin-Lieder are, to me, one of the truly great masterpieces of the 20th century, which is saying something, given that there was so much music then that it's still hard to process.  I turn to the Hölderlin-Lieder whenever I need to clear my head of muzak and refocus.  "Sonnenschien !" "Wahrheit".  And gosh, it's beautiful, once you get into its magical vibe.  Kind of like being in Ancient Greece with a solitary shepherd and his lute.  Or flute). So what if Killmayer isn't populist mass market ? Like  Hölderlin, Heine and Goethe, significant artists and intellectuals are often way ahead of their time.

"A single note is very precious for me - like a crystal or a flower" . (Wilhelm Killmayer)

Wilhelm Killmayer was born in Munich and trained with Carl Orff.  His ideas on magical realism may or may not have come from Orff , though probably they were in Killmayer all along. Killmayer was also a man of the theatre, working with the Munich and Frankfurt opera and ballet houses.  Hence Yolimba, one of his greatest hits. Most of his work, however, is orchestral and chamber music, and for me, his art song to German poets.  So much to choose from ! A long and rewarding journey.  Killmayer's influence is substantial.  Wolfgang Rihm is his highest profile admirer, but there are many. But perhaps what I love most about Killmayer is his humanity. His work is informed by warmth and gentle humour, values not sufficiently respected in this age where might means right.   Orphaned at the age of six, at 66 Killmayer became the father of twins.  A lifestyle change if ever there was!  Killmayer took to the experience with characteristic goodwill. "I need to write more, now", he apparently joked.  Fortunately, he left us with a solid body of work to cherish and explore, though more of it should be recorded.