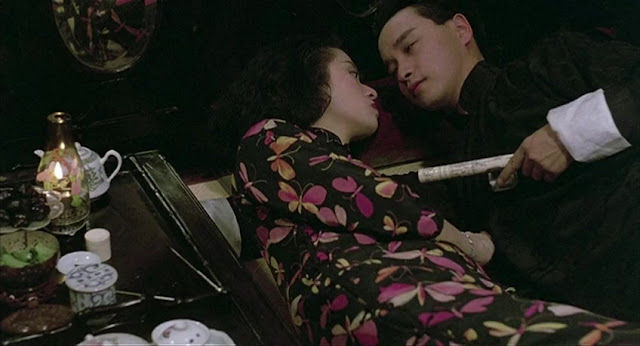 Rouge 胭脂扣, one of the great films of the Cantonese cinema renaissance, much praised but also much misunderstood.  Rouge is remarkable, a meditation on timelessness and fluidity. The heroine slips out of one time period into another, literally haunting her old haunts.  To appreciate this film, it's almost essential to understand the background, and the language. The English translation skims the surface.  Non-Cantonese speakers are left wondering where's the kung fu pace and violence. But that's the whole point.  Rouge is poetry, like an ancient  classical tale. Like The Peony Pavilion, for example, that 16th century masterpiece where lovers defy death to be together. (Please read my work on The Peony Pavilion as kunqu opera.)  But how are western audiences to grasp this film without knowing the background? Or even the younger generation, intent on denying heritage?  Chinese film is every bit as good as European or Japanese cinema. So a film as full of cultural references as Rouge needs context, and historical background.

Rouge starts in a fancy tea house, such as existed in Shek Tong Sui, once the red-light district of Hong Kong.  It's not a brothel per se, though services are provided.  Essential reading, Virgil Ho's book :Understanding Canton : Rethinking popular culture in the Republican Period,  Even those familiar with the period will be taken aback by the period detail. Customers are called "Twelfth Master " or even "Seventeenth Master". Families were big then, and, as the heroine says later "daughters don't count".   In this situation, the terms mean something different.  Luxuriate in the period detail in the set and costumes -  proper furniture of the period, not "antique" at the time, though it would be now. Screens with panels of gaudy coloured glass remind us that this isn't a place where scholars hang out.  Oval mirrors add a touch of "westerness". showing how "modern" the clientele thought they were.  And the girls! Glittering like artificial butterflies,heavily made up in ornate cheong sams that nice girls wouldn't wear.

Ru Fa (Blossom), who's only just started working, falls for Twelfth Master.They romp about, smoking opium,which was legal in Hong Kong until 1947.  He has dreams of becoming an opera star, she has dreams of getting married.  Oddly enough, his mother (who has a past) is willing enough, but his Dad isn't keen.  The Chan's home, upper middle class, though not rich, is also shown in period detail. Homes like that still intact in the late 60's and 70's. So how are the lovers to stay together? 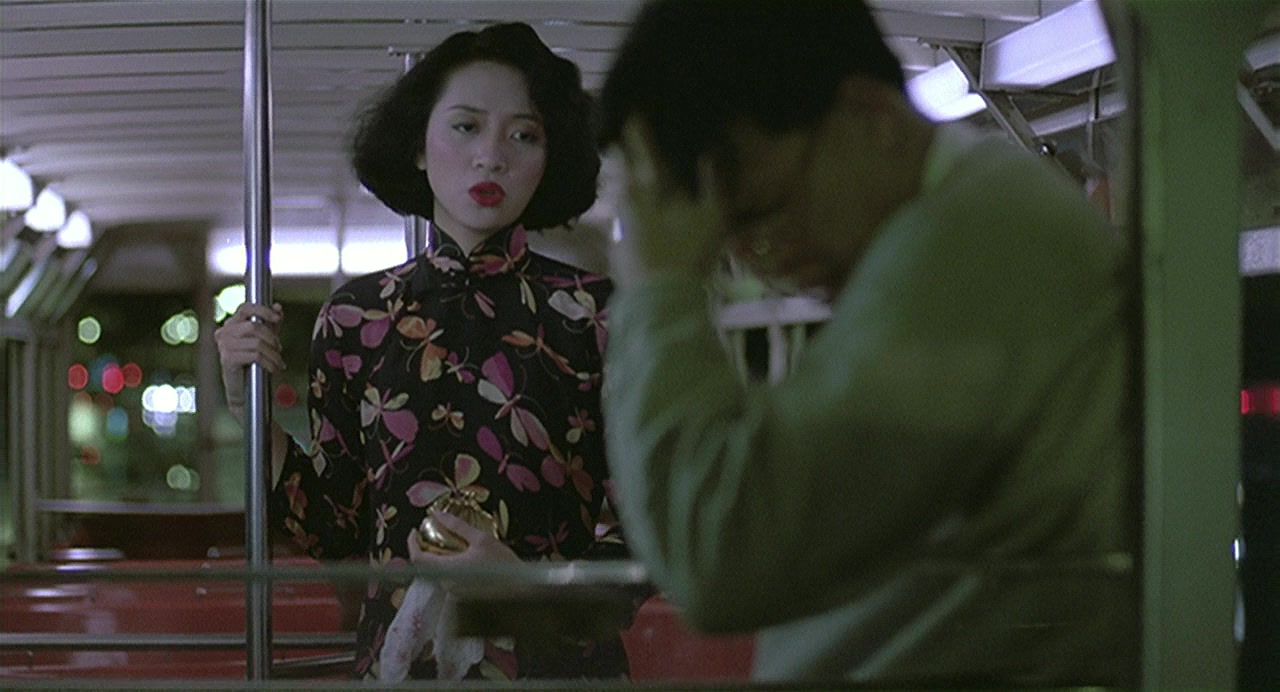 Cut to modern Hong Kong, in the 1980's. A newspaper office, desks piled up with hard copy - no computers then. Though this was reality when the film was made, only thirty years later "modern" has itself become antique.  The sections of the office are divided by low wooden panels.  Yuen Ting's working late. His long-term girlfriend Chu's gone home, having grabbed a gift he's given her - new shoes (hidden meaning). In walks an elegant woman who wants to place an ad in the newspaper to find someone.  She's like a vision,in ornate qipao, her face painted, her lips scarlet with old-fashioned rouge. Even stranger, she doesn't know about money and speaks in stilted, archaic style.  It turns out that he lives in Shek Tong Sui, so she follows him.  She asks strange questions about the area - where is a famous restaurant? Closed years ago, now a convenience store.  She likes Cantonese opera, mentioning long-dead stars she used to listen to.  She's never heard of Chan Po Chu, mega movie star of the 60's and 70's.  Then she mentions that she was 23 when she died.  She's a ghost!

Back in his apartment, everything is unfamiliar to her. He has a fridge, he drinks Coke ("foreign Wong Lo Kot", he explains. a famous brand oif herbal tea marketed since the 19th century.  Girlfriend Chu pops by. She gets a shock when she realizes Ru Fa doesn't wear a bra.   The two women are complete opposites, Ru Fa wan and miserable, Chu modern and down to earth.  She wears oversize jumpers to hide her figure, unlike Ru Fa, whose business was allure.

Ru Fa is searching for Twelfth Master,with whom she committed suicide fifty years before. They'd planned to meet on the Other Side,but he's nowhere to be found. So Yuan Ting and Chu use their journalism skills to track him down. They use land lines, not mobiles - another inadvertent antique touch, reminding us that what is now will not be a few short years along the line.  Eventually someone remembers the Chan family. Twelfth Master didn't die, which is why he can't be traced in the afterlife.  Yuan goes to a film set where a movie about the past is being made.  Twelfth Master is no star. He's a beggar, who pees on his shoes, his dreams of glory gone.  Ru Fa looks on him in disgust.  She hands him the rouge pot he gave her long ago, reminding him of their pact to be together.   He calls her name, in disbelief.  Out of the fog of his present, a glimpse of a long forgotten past. "Ru Fa !Ru Fa! Don't leave me!" he calls, but she's gone. 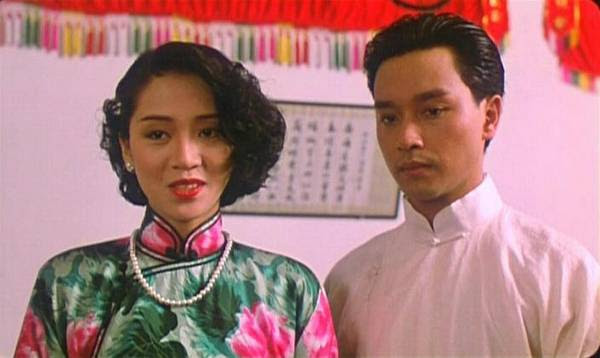 The stars are Anita Mui (Ru Fa) and Leslie Cheung (Twelfth Master)   Fifteen years after Rouge was made, both were dead, within a few months of each other, she of cancer, he a suicide, which in itself is pretty ironic.  Watching the film now is a much creepier experience than when it was new. The film was directed by Stanley Kwan, based on a novel by Lilian Lee Pik-wa.  Yuan Ting was played by Alex Man Chi-leung and Chu by Emily Chu Bo-yee.  In another episode of time within time, connecting opera with the HK film industry, Patrick Tse Yin makes an appearance as a patron of the tea house. Another irony ! Tse Yin was a megastar, from the early 1950's. He didn't need to make cameos in his (relatively) old age, so his presence adds another touch of timelessness.
at August 02, 2017