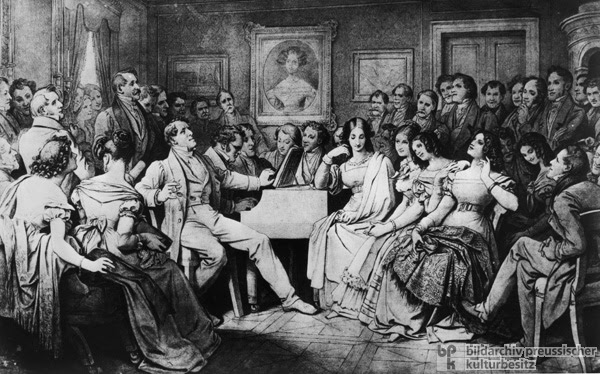 Everyone knows Schumann's ImWunderschönen Mai from Dichterliebe but what about Franz Lachner's setting of Heine's poem ? Lachner's setting pre-dates Schumann's and is a masterpiece in its own right.  Lachner (1803-1890) gets short shrift because he wasn't Schubert or Schumann, but why should he have to be ?  As Peter Schreier said: “You appreciate the peaks when you know the landscape". He wasn't an imitator, and their "influence" as such was generic rather than direct, though he knew both Schubert and Schumann personally.  Setting the same poems means not a thing ! Heine's so interesting that composers are still setting him today.  Lachner was part of the Schubertiade circle, though he was very young - six years younger than Schubert yet still significant enough to be depicted in the 1826 drawing by Moritz von Schwind, which shows Schubert at the piano with Josef von Spaun to Schubert's right and Johann Michael Vogl to Schubert's left. Lachner is the figure with his head bent, behind von Spaun. Lachner is also seen with Schubert in von Schwind's pen drawings in the vineyards at Grinzing.
Lachner's Im Mai comes from his best known song cycle Sängerfahrt op 33 (1831-2) and is an early setting of Heine's Lyrisches Intermezzo.  Lachner, who was still living in Vienna, wrote the cycle as gift to his fiancée Julia Royko. Sängerfahrt (Singer's journey) and Dichterliebe (Poet's love) ! Ten years later Schumann would write Dichterliebe as a wedding gift for Clara Wieck.  The choice of  Heine is interesting, too, since the poems are too ironic to be romantic. Unless your loved one gets wooed on tales of loss and tragedy.   In Lachner's Im Mai, rippling triplets in the piano part suggest  gentle movement - perhaps warm breezes ? The vocal line rises, as the sap does in Spring. "Da ist in meinem Herzen, Die Liebe aufgegangen".  The  sprouting buds and branches of blossom in the text awaken in Lachner a wonderful circular melody in the piano part. It is so beautiful - reminiscent of the melodies Beethoven and Mendelssohn used in order to evoke the countryside The piano seems transformed, as if it were an ancient folk instrument. There's nothing quite like this in the genre, not even the faint echo of hurdy-gurdy in Der Leiermann (though there's no connection between the songs or cycles). Or perhaps it suggests the lyre of some antique shepherd in an Arcadian landscape.  For Lachner and his contemporaries this would have evoked the image of Orpheus, this time successfully leading his bride back into Spring and life. The circular figures may also suggest the rhythm of Nature, and changing of seasons.  Lachner respects the simplicity of Heine's poem, with its understated strophic verses : too much artifice would spoil the purity.  After the second verse the piano part returns, drifting off gently, into silence.

In 1836, Lachner (a Prussian), landed a powerful job as conductor of the Hofoper in Munich. He had direct access to the King, and influence on everything musical in Bavaria. Lachner was to Munich what Mendelssohn was to Leipzig and Berlin. Nonetheless, today Lachner's relatively unknown, primarily because he wasn't Richard Wagner.When Wagner came on the scene, Lachner was pointedly retired. Nonetheless, he's fascinating as a kind of missing link, between the very early Lieder of Beethoven  and the songs of Brahms. His chamber music is fairly well known,  and there's now more interest in his songs. There are several recordings of Lachner songs, mainly from Sängerfahrt op 33 but many others await discovery. Christoph Prégardien and Andreas Staier pioneered Lachner in a 1998 recording, presenting Lachner with Beethoven's An die ferne Geliebte and the songs of Nikolaus von Krufft (which I love) . The use of fortepiano is perfect, adding a period refinemt to songs that do need elegance and a light touch.  There is only one full recording of Sängerfahrt op 33 by Rufus Miller, which was a courageous thing to do at the time, but unfortunately the performance isn't very good. Prégardien has contuinued to sing Lachner over the years, often different songs , and  Mark Padmore's recorded a few for Hyperion.  Angelika Kirchschlager also has them in her repertoire and has done them at the Wigmore Hall.