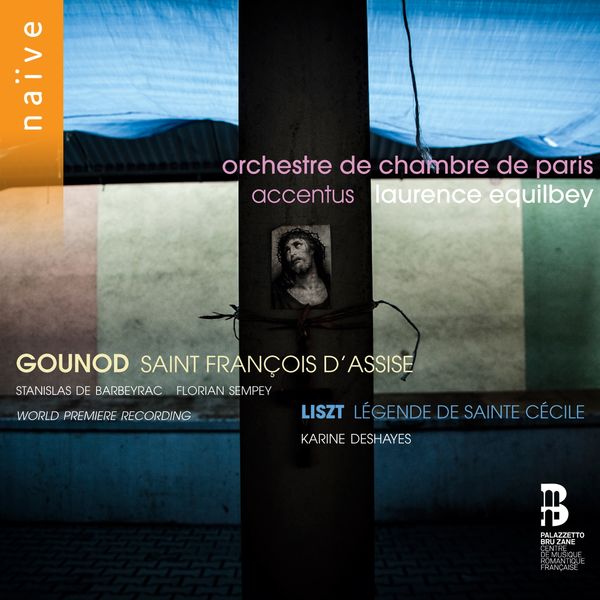 The world premiere recording of Charles Gounod's last oratorio, Saint François d'Assise,  with Laurence Equilbey, the Orchestre de chambre de Paris and Accentus chamber choir and soloists. First heard in March 1891, Gounod's Saint François d'Assise was thought lost for over a century until a manuscript was discovered in a convent in Auvers-sur-Oise. Sponsored by Palazetto Bru-Zane, and distributed by Naïve, this recording was made in performance at the Philharmonie de Paris in 2016.
"A dream crossed my mind to write a sort of musical triptych after the manner of the primitive painters", wrote Gounoid as he began Saint François d'Assise. "I would like the first of the two tableaux to be a musical represenation of Murillo's painting depicting the crucified Christ as He leans towards St Francis and puts his arm around him. The secvond tableau would be a transposition of Giotto's admirable painting The Death of St Francis in which he is surrounded by his friars."   Hence the character of this oratorio, at once simple and profound, reflecting the values of St Francis, who renounced worldly status  for vows of poverty and humility. The beauty of Saint François d'Assise lies in its quiet sincerity, its colours radiant but pristine.  It is a long way from Grand Opéra, but moving in its own way.


The first section, La Cellule, begins calmly, with a pulse that resembles plainchant heard from a distance, the line gradually rising upwards and growing brighter.  From this arises the voice of the tenor, Stanislas de Barbeyrac. St Francis is alone in his cell, contemplating Christ. "Mon conurbation s'abîme", the orchestral line surging, as if in tune with the saint's heartbeat, or perhaps the flow of eternal,fountains, mentioned in the text.  Suddenly  a new theme appears, richer and firmer still, for the crucifix in the cell seems to come alive in the voice of the baritone (Florian Sempey). For the saint, this is a miracle. "Je ne suis plus à moi" but one with his God.   In the second part, St Francis is on his deathbed, the choir representing his fellow monks chanting in prayer. Long, elliptical  brass lines suggest chill, or perhaps a call from afar : quiet winds suggest the palpitations of a weakening heartbeat.  St Frqncis comforts his monks. "C'est la mort qui s'enfuit" Another chorus, this time representing angels, wafts the saint up to heaven.
Also on this recording, two hymns to St Cecilia, the patron of music, the first Gounod's Hymne à Sainte Cécile and Franz Liszt's Légende de Sainte Cécile.  Unlike Gounod's larger religious works, such as his Messe solennelle de Saint Cécile, his hymn is a miniature for solo violin (Deborah Nemtanu) and small orchestra with horns,  harps, winds and strings.  A lovely coda, where the violin line flutters delicately, haloed by the other strings.  Liszt's Légende de Sainte Cécile for mezzo soprano (Karine Deshayes) chorus and orchestra sets a poem describing the life of St, Cecilia, martyred in Roman times. Thus Liszt alternates mourning with sublimation, suggestions of early plainchant with "modern" idiom, the two strands flowing together as if in procession.
at May 14, 2018