Leoš Janáček From the House of the Dead, (Aus dem Totenhaus) from the Bayerisches Staatsoper, Munich,. Unlike Frank Castorf’s Ring for Bayreuth, whose import escaped me,  here he keeps much tighter forcus on the opera itself, with strong results.  The staging reflects the music remarkably well  and the visual details amplify meaning.  Janáček's opera isn't "realistic". The prisoners are trapped in claustrophobc dystopia. Their minds take flight when they're given a chance to stage an entertanment. Nothing is logical. Gorjančikov, the politcal prisoner, is presumably most dangerous to the regime, yet suddenly he's freed, and the Major falls over himself to pretend the beatings didn't matter. When things are upside down, naturalism takes second place to artistic expression.  Janáček's  music is astonishingly innovative, especially in this new performing edition by John Tyrell. The story begins and ends with Gorjančikov, who's middle class and intellectual : he doesn't belong and doesn't do much.

The strongest characterizations are given to the other prisoners, nobodies whose tales are told in a series of vignettes that seem to unfold in parallel. Gorjančikov, leaves, but perhaps the others remain eternally in limbo, their stories repeated by thousands of others.  Years before Berg created Lulu  Janáček is writing an opera that moves like cinema, where things operate on simultaneous levels and time frames. Bear this in mind regardiung the set design (Aleksandar Denić) comprised of enclosed spaces, like the prison itself, which allow changes of focus.  That's why there's a caneraman wandering among the crowd. What he's filming is shown close up on a large screen behind the main action. 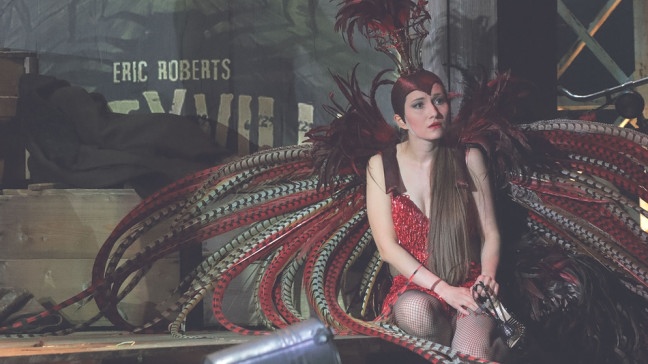 Castorf’s focus on meaning emphasizes the Eagle, the "Tsar of the Forest" brought wounded into the gulag and set free at the end.  As a device, it's rather too obvious, but blame Dostoyevsky, not Janáček or Castorf.  Some productions treat the Eagle as the symbol it is, but Castorf and the  dramaturgist develop it as a fully fledged character on its own terms. They use a dancer,  garbed in brightly coloured exotic feathers, at once an object of fantasy and a real personality.  To complicate matters,the Eagle seems to be played by the same woman (Evgeniya Sotnikova) who sings Aljeja and the Prostitute and plays Akulka, the woman Luka loved and Šiškov murdered.  This might seem confusing but is in fact consistent with several underlying themes in the opera, so we'd do well to pay attention.   The prison is all-male. a reversal of the natural order.  The strage play the prisoners put on for entertainment unleashes dark memories : women are brutalized because they're thought unfaithful. Women have no status other than as projections of male insecurity.  They're all prostitutes,  even if they're innocent virgins.  This is a perceptive insight into Janáček and his relationships with women.  He felt imprisoned by Zdenka, and liberated by Kamila Stösslová, the modern "new" woman who made her own rules. (Please see my article Janáček's  Dangerous Women from 2010.

So the conflation between The Eagle and the female presences (not all of them actual roles)  in this opera makes sense. It al;so makes sense then that Gorjančikov wants to take Aljeja under his wing not just from idealism but because he's as beautiful as a girl, and pure.  In an age when we know about sexual abuse and sexual bullying in prisons, the idea that Gorjančikov should grope Aljeja should come as no surprise. Quite possibly Gorjančikov isn't a nice guy even if he's a prisoner.  There were some less effective moments like the screens with text,  the Spanish monolgue, and skeleton costumes that suggested the Mexican Day of the Dead. This opera is plenty enough macabre without needing camp.  But the emphasis on tattoos worked fine: all these people carry stories and tattoos are often the literature of the dispossessed   And there's a chicken coop on stage,   a reference to the hens in Cunning Little Vixen.

Veteran Peter Rose made a fine Gorjančikov, and Evgeniya Sotnikova desrevs special praise for her efforts above and beyond the usual range of Aljeja. Aleš Briscein always impresses so his Luka (Filka) was very good.  Bo Skovhus was a very good Šiškov.  Charles Workman was Skuratov, and the supporting cast and chorus solid. A word of praise for Simone Young, the conductor.  She's generally been more reliable than inspired but here she was passionately on message, shaping Janáček's craggy angulars while also letting the quieter melodies fly.