Sad songs of the Li People

黎歌 - Song of the Li People (also known as Farewell Song)  - an award winning film from 2011, which honours ethnic diversity in China.  The first scene is straight ethnology, shot from real life.  An elderly Li woman in traditional dress sings a traditional song.  The film then cuts to the sound of a man singiung a traditional call, which echoes across mist covered mountains and rivers   How beautiful that scenery is ! The Li people inhabit an autonomous region around Guangxi and Hainan on the tropical coast of south west China.  Although they are believed to have migrated from further east in ancicent times, they have a distinct language and culture.  To this day, there are just under 2 million , though many, like others in China, have migrated to larger cities. This movie is thus a record of Li culture and of social change.  Though the pace is sedate, that allows lots of music and shots of scenery, which are very much part of the story - beautiful cinematography.

A small boat putters along the river  It's operated by A Dong, a village youth. Though it's the prefered form of transport for the locals, the outside world is not so far away.  Danmei scrapes a living selling tack to tourists  but she's such a good singer of traditional Li song that she's sought out by Lao He, an ethnomusicologist. Life in the village isn't easy and many villagers have already gone to work in the city. Danmei is reluctant. "In Guangzhou", she says, people "despise those who can't speak Cantonese".  Rather topical. Danmei uses a laptop to look up Guanzhou , but her friend, who's lived there and grown hard, says "No matter how nice it is, it's not our place". Nonetheless, Danmei and A Dong plan to elope and look for work.  They haven't enough money but he buys her an "expensive" dress in the nearby small town. 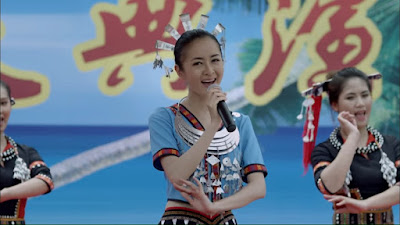 In the big city, things aren't much easier. Lao He's song and dance ensemble has funding problems.  Should they stick to traditional styles or adapt  to popular tastes ? Would selling records raise income ? To cover recording, Lao He invests his savings on the stock market but loses everything.  The Ensemble gives a concert for a factory, all the workers lined up in polite attendance. The boss makes Danmei an offer : he'll finance the troupe if they do what he wants to market them.  So they get gigs in glamourous hotels, but with audiences who don't really care. They're dispirited, but what can they do ?  The rich man offers to make Danmei "queen of Li song" making records in Beijing for the mass market. She wants them produced by ensemble member Qianhong,  who is talented but impractical - he spends all his free time playing computer games in games arcades. He's reduced to singing pop songs in nightclubs.  The ensemble's gradual disintegration is played out against a sensitive portrayal of the city - shops selling "Coconut King" local cigarettes, buildings planned for ventilation in a hot climate without air conditioning, the ensemble's living quarters with pot plants in the alleyway.  A Dong, who has followed Danmei all along phones her but her line's busy.  Danmei stands with Lao He on  a beach, looking out to the ocean. They're very far from the Li River.  Lao He's moving to Beijing, as far as you can get from Li country. Danmei takes up the rich man's offer and runs his "cultural company". In the last scene, she's being chauffeured in a fancy car along a freeway somewhere on the Guangxi coast.  A beautiful film, made by the Guangxi/Hainan Film Production Studios. Fantastic music, too. The film has Chinese and English subtitles. But if you spoeak Manadrin, an extra bonus ! As the closing credits start, there's a series of interviews with Li musicians.

If you like this, you might like Frühlingsglaube the movie 立春 where a singer loves schubert so much that she wants to dedicate herself to art. Things don't work out so easily, but she finds her vocation in another way.
at May 07, 2018