Vivaldi Orlando Furioso from Teatro la Fenice in Venice, conducted by Diego Fsolis, directed by Fabio Ceresa with a cast led by Sonia
Prina, now on Culturebox. On an enchanted isle in the middle of nowhere,  where Alcina reigns, Medoro loves Angelica, Ruggerio loves Bradamante, but they get mixed up  and scrap among each other. Alcina is part goddess, part witch, her rival Astolfo the only one who can stand up to her. No wonder Orlando goes mad ! But in the end, all is magically resolved. Vivaldi's audiences  knew Ariosto and his predecessors, the Greeks, well enough to
appreciate that art is not pseudo-reality so much as meta-reality, where
men and mythic figures interact in all too human ways in decidedly
non-human situations.  Vivaldi's audiences went to the opera to be thrilled and challenged and,
indeed, titillated.  In the world of art, the only logic that applied was emotional truth : ergo, the laws of church and state could be tested (within limits).  Orlando Furioso is a play on outward appearances and delusion.  If there's a message it's not to take things too literally. 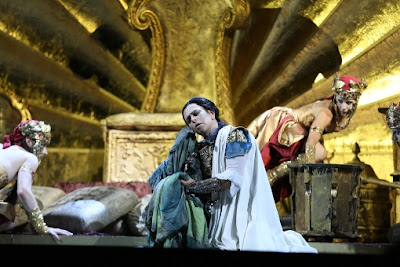 Not, for exmple, the gender bending, not unusual in the genre for many different reasons. The sole soprano, Angelika (Francesca Aspromonte) is an innocent not nearly as complex as the other characters. And what a character Orlando is!  He's is a warrior hero who gets thrust into anti-hero mode, ideal for a singer as spirited and as experienced as Sonia Prima who has can bring out the full range of Orlando's personality. That mad scene is a tour de force which Prima carries off so conviningly that it feels both real and unreal at the same time, in the best sense.  He's still a leader and a man of action, though he loses control for a while when he's under a spell.  Medoro and Ruggerio were originally cast for castratos, but now taken by countertenors, here Raffaele Pe and Carlo Vistoli.  Bradamante, the woman disguised as a soldier, is Loriana Castellano and Astolfo is Riccardo Novaro, a bass. Alcina (Lucia Cirillo) is a contralto/mezzo part, signifying Alcina's  decidedly feminine sexuality while also hinting at the demonic side of her personality. Modern
audiences have different expectations, but in baroque times higher voice
types signified good guys, whatever their actual gender, while bass
voices signified darker portent. Vivaldi gives all the singers extended sections in which to display their virtuosity, and also imprint their individuality on the listener.  They're all gorgeous in their own way !

Splendid production, too  The staging is simple  A giant clamshell provides the focus, a hint at mythology. Like Venus, Alcina arises from the sea. Her magic is love, her costumes decorated with roses, and petals fly at her bequest  Her handmaidens are both female and male, some warriors dressed as women, in keeping with the plot. Changes of scene are wrought by lighting effects, transforming the golden palace into craggy nightscape, and  the green forest where Orlando meets his fate.  Spectacular effects, through simple means, reflecting the limited staging of Vivaldi's age with modern technolgy.  Even better, the detail in the Personenregie. Every gesture, every movement  evokes the personality of the role, and/or the music.  And best of all the artistic rigour behind it : such  elegance grows absorbing the idiom and values of the era, not from sticking on Hollywoodesque excess.  The strange animal in Alcina's kingdom is a creature who seems to have stepped out ofd a baroque drawing, with the body of a horse and the head of a night bird : highly symbolic, clearly  a stage prop, not meant to be naturalistic. 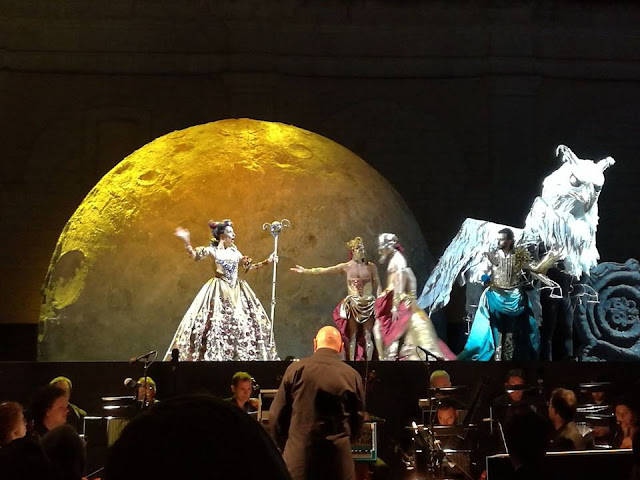