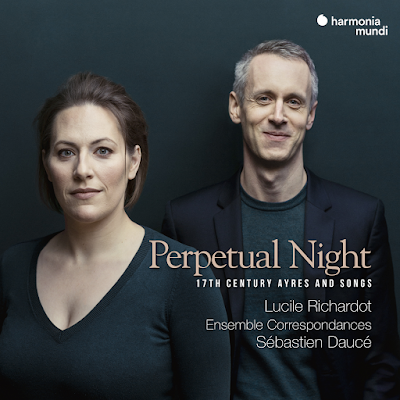 New from Harmonia Mundi,  Perpetual Night. a superb recording of ayres and songs from the 17th century, by Ensemble Correspondances with Sébastien Daucé and Lucile Richardot. Ensemble Correspondances  are among the foremost exponents of the music of Versailles and the French royalty, so it's good to hear them turn to the music of the Stuart court.  Though the songs are in the English language, they are in artistic terms very much attuned to wider European influences.  In 1610, King James's son Henry became Prince of Wales, importing into his household musicians who favoured the "new music" of the era. Many were singer-lutenists, who could be deployed into flexible ensembles with other instruments, like the then-new theorbo providing continuo.  Among the other new forms introduced was what is now called declamatory song.  As Peter Holman writes in his notes these have the "character of a grace almand, or air, the vocal line mirrors speech inflections, and often illustrates words with appropriate images, so they are rarely tuneful though they tend to have more melodic coherence than true recitative".

Although Prince Henry died only two years later, the innovations he favoured took root, and were further developed by Charles, who was to become King Charles I. .Robert Johnson's  Care-charming sleep  was written for a play by John Fletcher, performed by the King's Men (Shakespeare's company). making the connection between Jacobean poet/playwrights and music, which would later flourish in the Restoration.  John Corpario (1570-1620) was born John Cooper, adopting an Italianate name in line withn the fashion of the time. He also served the next Prince of Wales, Charles, who was later to become Charles I.  His Go Happy Man is a song for high voice and lute, where the vocal line stands clear,  the poetic purity of the vocal line revealed through intonation and phrasing.  What tears dear Prince, can serve, by Robert Ramsey (c1590-1645) is a song of mourning, but so beautiful that it may well express personal sorrow.  In contrast, Ramsey's Howl not, you ghosts and fairies is a miniature drama, illustrating a scene from Orpheus and Euridice for multiple voices including bass and a possibly allegorical extra character.  Like Britanocles the great and good appears (William Lawes 1602-1645), it is an early example of a genre which would later become popular.  Rise, princely shepherd (John Hilton 1599-1657) is a setting of The Judgement of Paris. In Lawes's Music, thy master of art, is dead, the interplay between different voices is pure polyphony. This emphasis on the beauty of vocal line elevates intonation and phrasing, employing voices as if they were instruments.  In Adieu to the pleasures (James Hart 1647-1718) the instrumental introduction and postludes are more prominent, setting a context for the largely unaccompanied voice, and in Sarabande (Matthew Locke 1621/3- 1677), for variety, the instruments are unaccompanied by human voice, a rather appropriate prelude to When Orpheus Sang (Henry Purcell). Poor Celadon, he sighs in vain (John Blow) the flow of the voice, with clipped consonants and plangent, stretched vowels evokes the "English tenor" aesthetic.  John Blow's cheery Epilogue: Sing, Sing,  Ye Muses brings this delightful recording to a logical conclusion.

Superlative performances from Ensemble Correspondances with lithe, agile voices, especially the higher voices, male and female, complemented by Lucile Richardot. Her range is impressive, enhancing and integrating the other voices.  At  St George's, Hanover Square, on Wednesday 16th May, she will be doing a  Hommage to Lully concert as part of the St John’s Smith Square London Festival of Baroque Music.  The theme of the 2018 Festival is The Treasures of the Grand Siècle, curated by Sébastien Daucé and Ensemble Correspondances, and is exceptional, bringing many of the finest baroque specialists to London in an eclectic and very unusual programme of  French music.   READ MORE HERE AND BOOK !  . Lots to look forward to ! It will culminate with their Le Concert Royal de la Nuit on 19th May. The recording is available on Harmonia Mundi and possibly soon on DVD (with dancing).  Le Concert Royale marks the beginning of "modern" music, opera and ballet.  It is also a metaphor for the baroque spirit, where audacity fuels extravagant imagination, elegance restraining excess, technical achievement balanced by refinement, agility andenergy.
at May 01, 2018