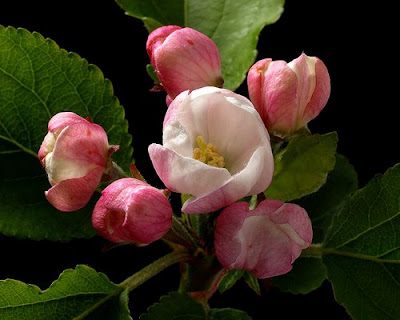 May is apple blossom time, so it's a nice time to do an Elgar pilgrimage. Worcester is apple growing country, and though you can't get into commercial orchards there are plenty of trees to see - they even grow wild in hedgerows. The lilacs are out and the first roses and lilies appear soon - definitely a good time to get away to the countryside. New asparagus just out in the local farm shops, and "home" made cakes !

The popular image of Elgar comes from things like Pomp and Circumstance, as if the man were a stolid, complacent pillar of the Establishment. Visiting his birthplace at Broadheath on the outskirts of Worcester is a reminder that his roots were decidedly humble. He was an outsider, who struggled hard to attain his later status : nothing taken for granted.

In 1857, the cottage was semi rural. The small gate at what is now the bottom of the garden opened out on a quiet lane. Now the house is approached through a car park in what was once the backyard, but in Victorian times, the family would have walked uphill from town. The garden, now gloriously planted in the ornamental "cottage garden" style, would have been functional, probably filled with vegetables and fruit, maybe chickens, as well as flowers. Inside the ceilings are low, the floors uneven, rooms on different levels, as if built at different times. It must have been cramped and dark, cold in winter, feverishly hot in summer. Another good reason to visit before the summer and the crowds.

Inside there are various relics of Elgar's family and life. One thing I look out for when I visit are the embroidered samplers. Some child worked hard to make them, probably tired and in dim light : all the more reason to admire their quality. More specifically Elgar-related is the museum in an adjacent building. It's large and airy and has a very well chosen series of exhibits. Currently there's a special show called "From the cradle to the grave" which runs til Xmas 2009. The cradle would have been in the small first floor room overlooking the garden. The grave is a few miles up the road in Little Malvern. One of Elgar's rented homes is in Worcester itself but you can't go in. But the museum is good, and of course you can't miss the cathedrals. There is also a cycle route if you are keen, which takes in the whole area.
Photo by Roger B
at May 03, 2009