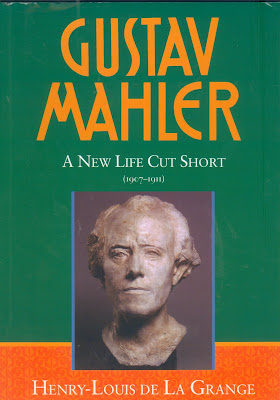 This day, 26th May, marks the 85th birthday of Professor Henry-Louis de La Grange. Prof. de La Grange is the world's foremost authority on Gustav Mahler. Last year he published the fourth volume of his monumental biography of the composer. It's probably the most significant in the whole series, because the years covered were full of incident. Mahler was going through radical changes in his life, and producing masterpieces like the 8th and 9th Symphonies, and Das Lied von der Erde.

The book is extremely important because it sheds so much new light on the composer. He died at a point when, perhaps, he might have been starting a whole new phase. He was only 50, entering a period when many composers are just reaching maturity.

Professor de La Grange's work has huge implications for how we appreciate Mahler's music. The more we understand about what made the composer tick, the better we are able to understand the way his music came about. Biography is thus an extremely useful tool for informed interpretation. It enhances performance, and deepens the way we listen. Mahler performance practice has benefitted so much from Professor de La Grange's insights. He has contributed so much to Mahler studies that, frankly, there is no way anyone can claim to "know" Mahler without knowing his work.

Read "Mahler Triumphant", a detailed synopsis of the volume HERE. It's written by Hugh Wood, the composer. It's an excellent description, so take the time to read it thoroughly..

This fourth volume is the culmination of a lifetime's work. The bust on the cover was made by Rodin. Anna Mahler, the composer's daughter, who was a sculptor, also made a bust which now stands in pride of place in the Médiathèque Musicale Mahler in Paris. It was bought by Mahler people all over the world to celebrate Professor de La Grange's 80th birthday. That's how much the author is loved and respected.

Mahler has been Prof. de La Grange's career. But he's had a remarkable life himself. He studied with Alfred Cortot, and the library contains the Cortot archives. He's been involved in music on many levels: he was one of the regulars at the Domaine Musicale concerts Boulez organized from 1954. At the first concert none other than Jean Cocteau arrived, in a flowing cape. Professor de La Grange is a modest man, preferring to keep the spotlight on Mahler, but his own life is a mirror of 20th century intellectual life and is worth volumes too. His parents were fascinating people too – his father, a French count, one of the first pilots in the early days of flying, his mother a lively patron of the arts. Such interesting people, no wonder they produced such an interesting son.

So Happy Birthday, Professor de La Grange, may you prosper! I can't begin to express how much admiration and affection I have for him and for his work. You need this book if you care about Mahler. Of all four volumes, this is the most important because it covers the most turbulent years and some of the more complex symphonies. Please explore this blog where there's LOTS on Mahler : original material, inspired by Prof de la Grange's pioneering work - see Mahler 10th posts for example
at May 25, 2009

I just finished reading de la Grange's entire opus - four volumes - on Mahler and was almost as taken by his great work as I was with the subject himself.

Prof. de la Grange has done the world and history an enormous service in chronicling the life of Gustav Mahler. I especially was taken by its incredible detail and the analyses of all of Mahler's works.