The buzz is on ! Lulu at ROH 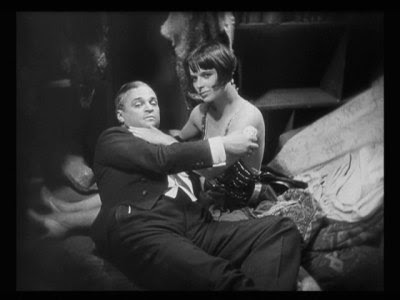 The big buzz in town's the new Lulu at the Royal Opera House, London, starting June 4th. Word of mouth is spreading fast that it's going to be interesting. Lulu herself will be a mystery new singer called Agneta Eichenholz, quite famous in Sweden but unknown outside. That's very appropriate as Lulu is a mystery. Who is she really? People know her by different names.

The new ROH production sounds fascinating because Christof Loy (who found Eichenholz), has worked carefully on the characterization. He seems intrigued by the essential mystery of who Lulu is and why she's come to be the way she is. It sounds like a much more psychologically informed approach than the usual cliché that assumes Lulu is no more than a mirror, projecting what others want.

Listen carefully to the music, blanking out the words. Lulu's music speaks, elusively, even though she seems passive. She's had a horrific past that's taught her to hide herself behind survival strategies. That's exactly how abused kids function. They wreck things like a kind of pre-emptive strike because they've learned that happiness can't last.

The photo above comes from the 1929 Louise Brooks film based on the Wedekind play that inspired Alban Berg. Brooks doesn't do actorly things like emote or declaim: instead she fills space, generating energy. That's another reason for getting into the opera through the music. It hovers over the plot like an invisible presence, it speaks character.

So why is the new ROH production causing such interest? Michael Volle is singing the critical role of Dr Schön, who's known Lulu since she was a girl. He's her extreme opposite, a powerful magnate who seems to have it all, but is destroyed. Volle has worked with Loy before – last year in Munich they did Hans Werner Henze's Die Bassariden.

"I knew he would not do anything conventional but that he would try and get into the characters and find the key to their personality”, says Volle. Loy’s does this by working closely with the singers from the start. “We talk a lot about the role. He tells you his thoughts about the background and what he imagines the character is like and then you have to find a way to express it. He is one of those directors who knows and loves the music so well that he can make it easy for a singer to find his way into a character. He doesn’t try anything artificial you can’t understand. It’s more like putting flesh and bones on the score”.

“There are productions where there are a lot of sexual things on stage”, adds Volle, as if Dr Schön’s motives are simply erotic, for men (and women) lust after Lulu. But in this production, it’s more complex. “Only one kiss”, says Vollle, "and a few bits of touching. There’s no need to show nudity and violence. It’s shocking how much violence there is in it anyway”. Suicide, murder, implied paedophilia, and Lulu seducing Alwa on the very sofa his father bled to death upon, all easy subjects to play up to scandalize an audience. Yet Loy’s approach is not sensational for sensation’s sake. “What I like about Loy’s work is that he does not do Yellow Press”.

“It’s very tragic. Terrible things have happened to Lulu in the past, and it’s affected her so she can’t trust anyone, or be content”, says Volle, explaining the psychology behind this production. “She must always destroy the happiness of others ”. Lulu wrecks Dr Schön’s engagement but she’s unhappy when she marries him herself. “She loses interest because she doesn’t have to fight for attention anymore. In this production that tragedy is made very clear. There are lines which show Lulu does have feelings for Dr Schön, but she’s damaged, and hurts others because she’s been hurt so much herself”.

Volle is also happy with the Royal Opera House production because it’s being developed so closely with the conductor, Antonio Pappano. “He is a gift”, says Volle, “He was there at the first rehearsal, and he knows the piece inside and out. He gives so much input and ideas about the music”. With Berg, details count. “The more you hear in it, the more you discover”, says Volle. This is significant, as Volle knows Berg’s idiom well, having sung the title role in Wozzeck.

One of the minor subplots in this opera is the idea that wealth and status are worthless without deeper values. In Act 3 the banker's shares turn out to worthless, and of course Dr Schön's wealth does him no good. Perhaps Michael Volle's own background gives him insight, but he's an experienced singer who specializes in roles with depth of character. His Graf Tamare in Franz Schreker's Die Gezeichneten is exceptionally well realized. That's one of the great early 20th century operas.

Read more about Micahel Volle and about the new ROH production HERE. I'll be writing more about Lulu and this production in the next few weeks.

TRY TO GO ! As Volle says, on first hearing, it's shocking, but the subject is shocking. This is not a plot whose issues you can be complacent about. And listen to the music. It's not that difficult or strident, and a very good performance brings out its clarity and oddly enough its beauty. There is a very good DVD of the Glyndebourne production of 1996 where Christine Schäfer is compelling. Far and away the best orchestrally is the CD set with Pierre Boulez conducting. This isn't an easy opera to do. Many versions have weak points and there's one I would actively dis-recommend. So bear this in mind, and go to this Lulu and make the most of it. PLEASE READ THE OTHER POSTS on this blog re LULU, which include reviews, interviews, and a whole movie downlaod ! Not only this Loy production but Cheereau too and other thoughts on the opera. Go to the labels list on right and click on "Berg".