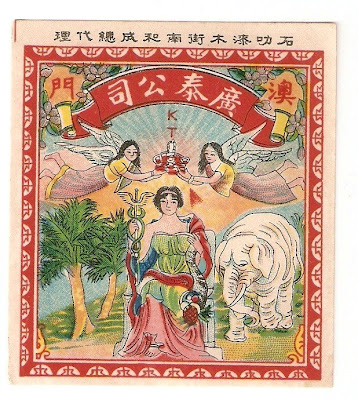 This is a firecracker label. There used to be lots of small firecracker factories in Macau, where firecrackers were rolled, filled and tied by hand. Lots of accidents, fires, etc. At new year, when I was a kid, the streets would be littered a foot high with spent firecrackers, often with others hidden below waiting to explode. Our neighbour used to buy a long string of fireworks, suspended from the roof, and then lit. Obviously safety hazard in modern high rise cities, so they were banned in Hong Kong after the 1967 riots. Which is why Hong Kong now does the biggest and best public displays.

Firecracker factories were dangerous places, and sometimes they would explode, killing everyone. No workers rights, child labour. Macau was one of the centres of firecracker making, usually on the outer islands. My uncle Herculano took us to visit one once. The kids were just tying strings of firecrackers together, or filling gunpowder with their fingers - no safety procedures. 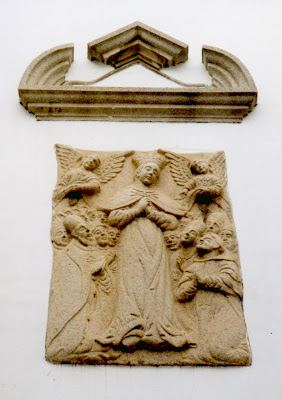 This label comes from a Macau firecracker factory. It is so unselfconsciously multicultural, it's fun. Whoever designed this probably wasn't too bothered about accuracy, but it's lively and would have sold well because the images, odd as they are, symbolize auspicious things like wealth and health. People do firecrackers to drive away bad spirits and bring good fortune, so it makes sense. The sacred white elephant comes from Buddhist mythology, and the risque half naked foreign goddess comes from Greek myth. She's holding what appears to be a cornucopia asnd the staff of medicine. And the angels, very un-Chinese, like the goddess and crown ? That's the clincher. The word "Macau" (O mun or Ao men) appears in the little gold boxes at the top. But in the old days, people were often illiterate, but they could see the symbols and know where the firecrackers came from.

At right is the original. See the angels? This image is the official seal of Macau, "the city of the name of God". The granite plaque was made to commemorate the incorporation of the city in 1557. The figure is the Virgin Mary, surrounded by saints. So the man who designed the firecracker label was on the right track. Click on the photos to get high-resolution details. PLEASE SEE OTHER POSTS on this blog for more cross culture ventures and how to read icons - see Macau, Chinese culture etc on the labels list on right.
at May 23, 2009

Email ThisBlogThis!Share to TwitterShare to FacebookShare to Pinterest
Labels: Macau