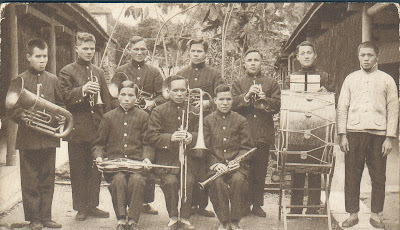 Images can speak as loud as words. "Reading" images in music, opera and stage is not so different from reading a poem or a painting. There's no scientific technique, it's more intuitive, though supported by background knowledge. You just learn to understand signals.

This is an early postcard of a band of blind boys in Foochow on the China coast around 1890-1900. (Click on photo to enlarge.) Foochow (Fuzhou) was one of the "treaty ports" forcibly opened to western trade by the "Opium Wars" (1840-60), a pretty term for military invasion. The card was published by the Church Missionary Society, so these boys must have been organized by missionaries: hence brass and drums. They must have played rousing hymns. No room here for finesse. Click on photo to enlarge - the Eurasians are trumpeters and one of the horn players.

This kind of music isn't so far off traditional Chinese band music, for public events like processions, where simple, loud and bright tunes work well. Though many missionaries were much opposed to traditional culture, these boys had a place in society. Since they were taken in by missionaries they would have come from poverty stricken backgrounds. Oddly enough Chinese funeral processions adopted western melodies like Dixie, O Susanna and She'll be coming round the Mountain. They'd be played by Chinese musicians, on Chinese instruments (augmented by western brass). In fact until I was quite old I thought these were Chinese songs. How this happened I don't know. Relatively few missionaries were American, and this was long before radio. Somehow, though, New Orleans funeral jazz mixed with Chinese tradition, creating a bizarre hybrid.

Then look at the boys themselves. At least three are mixed race. There's almost no research on Eurasians, and indeed only one decent book, Vicky Lee's Being Eurasian (Hong Kong University Press 2004). Yet Eurasians were a distinct and surprisingly large community. Their backgrounds were very different, but as a disparate group, they are a mirror to the history of modern China.

Eurasians weren't accepted by the mainstream, they had to find their own way through turbulent times. In big cities there were Eurasian networks, created by intermarriage. Some families have been mixed race for 150 years. It's certainly not just Madame Butterfly situations, though they did exist. Nowadays lots of people are mixed race. But once there was a time when being Eurasian was a kind of subculture: people stuck together and gradually there was a distinct China Coast Eurasian identity. It's a world that's completely disappeared, lost forever as the few who remember pass away. 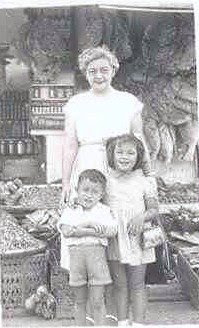 After 1949, most Eurasians became absorbed into Chinese society. They would have a very rough time during the Cultural Revolution when any hint of foreignness was a crime. A few years ago, I met a senior Chinese academic. He was obviously Eurasian, more white looking than me, though completely acculturated Chinese. He was old enough to have grown up in the Mao era, with the Red Guards and that violent paranoia. Yet he must have had a strong personality to have survived. He looked at me and I at him: we understood each other without having to put things in words. It was so poignant, a moment when history jumped into the present.

I'm interested in developing a resource for China coast subjects, especially Cantonese culture. So please let me know if you're interested. There is almost nothing in English on our South China heritage and yet now there must be thousands of people who grew up abroad or use English. And also, the uniqueness of Cantonese identity is not so obvious now people speak guoyu and think in national terms. It's important that we think of Chinese culture from a NON Eurocentric perspective particularly now that the net is dominated by the English language monoculture. Please contact me, maybe we can develop a resource.

HERE is a great resource for Sarawak Chinese culture. Most of the Chinese who settled in South East Asia (the namyang) originated along the China coast, in places like Fuzchou, which is on the periphery of the Cantonese world.
at May 29, 2009

Fascinating photo. At first glance, I wouldn't have spotted the Eurasian boys. I really like the way you drew out so much interesting information from this picture. Thanks for sharing!

Thank you, too ! Now that we are all scattered round the world, we are all mixed culture. So i want on this blog to tell people about how cultures mix and how to read the signals. Also, to commemorate unique South China experience. That's my little brother in the pic.