Prince Igor with blood and guts

Although Borodin's Prince Igor is rarely seen live in the west, there are many recordings. The music is gorgeous, and everyone knows the hit song "Stranger in Paradise".  Borodin's Prince Igor at the Coliseum, London with Novaya Opera and the Met's version have created a lot of publicity, but they are hardly the only points of reference. So in the interest of learning more, I watched how it  was done at the Royal Opera House in 1990, only 25 years ago, well within living memory, though the production was never revived. Bernard Haitink conducted the Bolshoi Theatre Orchestra and Chorus. The singers included Sergei Leiferkus, Anna Tomowa-Sintow, Paata Burchuladze, Elena Zaremba and Nicola Ghiuselev.. By any standards, a performance to be reckoned with. The director was Andrei Șerban, best known in the UK for his Puccini Turandot 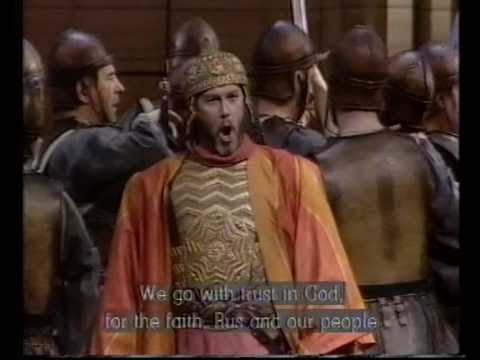 "Glory to the fair sun ! Glory to Prince Igor! Glory, glory!" sing the people of Putivl. Almost immediately, though, the sky (and set) darken. There's a solar eclipse. Șerban's set is based on strong visual angles, diagonals, horizontals and uprights. Igor and Yaroslava are further isolated by colour.  Their gowns billow gold and red, against the monochrome of their followers.  Then out come the icons, red and gold, too. No wonder Igor thinks he's on God's mission. Yet the same colours appear in the scene of debauchery where Prince Galitsky's followers get drunk and attack women.  More nudity (discreet) and violence here than at the Met or Coliseum, I suspect, but it's entirely appropriate. It's in the script. These thugs sing comic songs. Brutality underpins the whole narrative: miss it and you might as well watch Postman Pat. 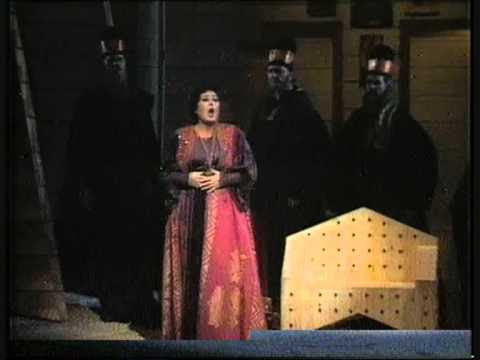 The point is emphasized when Yaroslava sings her long aria against a backdrop of austere angles and moonlight tones. "Where are you now, oh bygone days?" She is faithful to her man but the men around her have little concept of  fidelity. The maidservants who have been raped writhe in white shifts. Soon after the "Glory" chorus returns, and the Boyars place their faith in God's protection. Huge bells ring out, but Yaroslava senses danger. With piercing pathos, Tomowa-SintoW sings "There is no escaping God's judgement". Borodin immediately shifts to the Dance of the Polovtsian Maidens (photo of Elena Zaremba at the top). The costumes are exotic, and the music suggests "eastern" exoticism but the mood is desolation.  Konchak the Polovtsian Khan has captured Prince Igor whose son Vladimir loves Konchakovna. The understated set places full emphasis on the singers and the singing, and they deliver, beautifully. Burchuldaze's gorgeous in golden robes, too, and a true basso, his timbre warmed by the personality in the part.  The Polovtsian dances are wonderfully staged : the male dancer moves with angular but athletic grace. The orchestra create the "wild" rhythms of the steppes so dramatically that being a Stranger in Paradise doesn't seem like a bad prospect at all. Can we hear in this celebration of "savagery" hints of the Rite of Spring to come? Sadly, the filming is blurred and shot from a  fixed point in the balcony.

In contrast, Putivl with its repressive values does seem dull. Igor is back, but what has anyone learned? The comic players who caroused drunkenly when the women got raped, start singing again. Galitsky meekly accedes to Igor. What might really have happened had Borodin lived? Șerban's staging goes a long way towards making dramatic sense of a sprawling, illogical narrative held together by seductive music. Complicated contract problems prevented this Prince Igor from being repeated. A pity, since the staging adds so much to meaning. It still stands the test of time, though, so if it could be revived, it would help audiences to better appreciate the opera .
at April 06, 2014

Sounds a FAR MORE interesting staging of this awkward score than the one the Met presented. Better singers too.