How children learn about opera in China 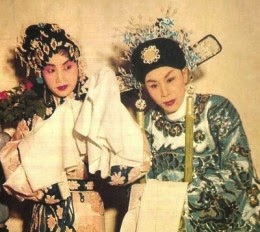 How to help kids love opera? These days every decent house needs "outreach" partly to develop genuine interest and partly to justify funding. Some of my recent posts on the subject : Will children ever learn about opera ? and End the Missionary Position in Classical Music

Here's how children learn about opera in Hong Kong. These schoolgirls were given a brief to make a documentary about any subjectb they liked and somehow picked Cantonese Opera with its long and complicated history and sub-genres. They had to research the subject for themselves, read up, do interviews and then do the "practical" working with opera personnel as well as with film makers. They wrote the script and presented it themselves. The film is six years old  and the final sequence about Chinese opera in English is misguided, but these girls are in PRIMARY school. This isn't a single occasion, but a regular experience for many kids in many schools. I went through that system too though I didn't do it until the first three years of secondary school. It was my school that pioneered the system sixty years ago. They did a full production of Purcell Dido and Aeneas. and even sewed the costumes themselves.  I was seven, way too young to be involved, but remember being fascinated.  A few years ago, they did The King and I which went on to DVD and sold well.

The secret of real education, I think, is to learn by doing: self motivation and fun. The subject doesn't matter, and the whole class gets involved. It's also a good way to teach kids how to organize themselves and project manage. Good multi-skilling training for life in general.