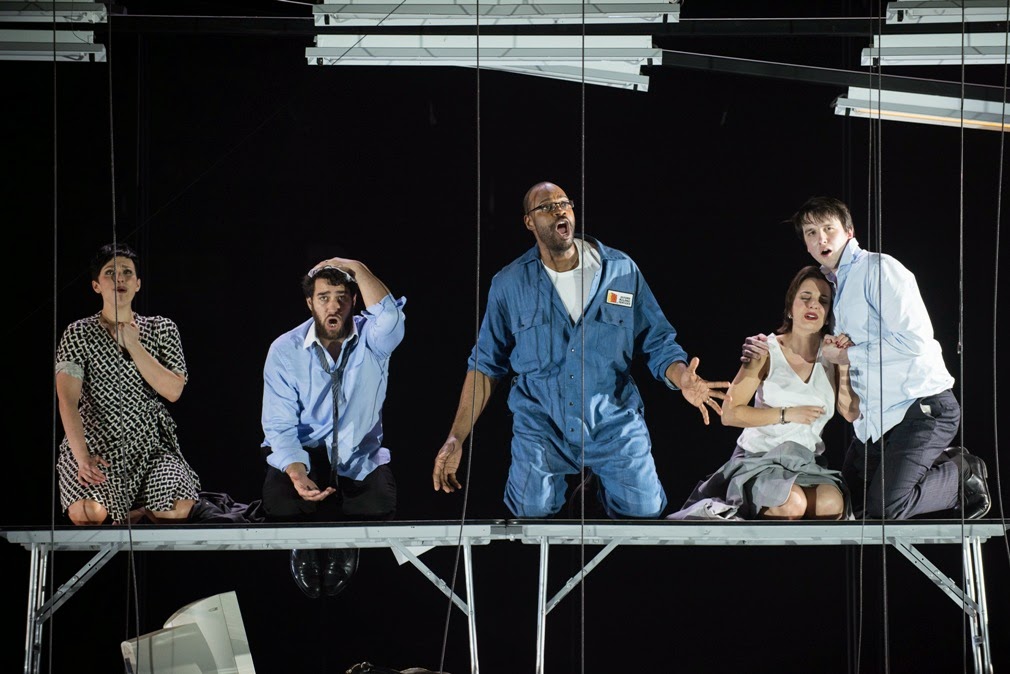 Tansy Davies Between Worlds at the ENO at the Barbican, London, confirms yet again the ENO's unique position in British cultural life.  Davies is a highly original, very distinctive composer. Between Worlds suggests great potential. It's her first venture into opera, building upon her orchestral style, interesting for that very reason. Everyone knows the events that took place on 9/11, so literal narrative would be crass.  We don't neeed to see planes crash. Many of the victims were trapped in darkness, not knowing what was happening outside. In Between Worlds, we get just that.  It's not an opera in the usual sense, but a meditation on the emotions people might have felt, lost in that claustrophobic limbo from which there was no way out but death.

Those who died trapped were ordinary human beings, facing an unimaginable trauma. Grand arias would be inappropriate. Real people don't play to the gallery, especially in such circumstances.  Bombastic gestures are for terrorists.  Davies concentrates instead on the fragile lines of communication between the inner and outer worlds:  phone connections that break up, messages that don't get through, signals that fail when they're most needed   In this opera, the orchestra sings what cannot be expressed. Wailing sounds suggesting sirens, creating anxiety, all the more disturbing because they sound muted and distant.  Ticking, tense mechanical sounds, beating staccato like the very pulse of the Earth.  A Birtwistle connection exists, though Davies's music, of course, sounds nothing like Birtwistle.  For me,  Tansy Davies's music has always felt sculptural,  as if she's working with physical, architectural forms.  In Between Worlds   she uses fragmentation: myriad tiny sounds that deliberately don't cohere, but en masse form vast walls. The Twin Towers were beautiful monuments of glass, defying the elements, but they couldn't withstand the attack. Those who remember 9/11 will recall the clouds of rubble and dust, waves of paper fluttering down from wrecked offices, and bodies falling, to be smashed into pieces. Listening to Between Worlds as a purely audio experience  will be an experience, As music, it's extraordinarily subtle.

Davies's vocal lines are stratospheric, reflecting  the idea of "looking upwards" to survive . This timbre causes probelms for many in the cast, apart from Andrew Watts, the Shaman, for whom a realm beyond mortal existence is normal territory. Although he's dressed in a business suit, his keening, legato seemed to float into space. Much of Manhattan was built by Native American construction workers, riding the girders way above the streets, turning empty nature into concrete. The Shaman is fantasy, of course, but brings a deeper level of meaning.  When Watts sings, one hears something of eternity, which fits in nicely with Davies's quotes from early music and hymn. The downside is that this stratospheric timbre is hell to sing.  Most of the rest of the cast is challenged.  Psychologically, this is true. The lines  break up frequently, like broken signals, and feel  like strangulated screams, words caught mid-flow in choking gasps.  Not at all easy on the ear, but perhaps it shouldn't be, in the circumstances. But focus on the music in the orchestra, conducted by Gerry Cornelius. This is an opera where abstract sounds tell the story, with beauty, dignity. and sensitive imagination.

The stage is divided into three separate spheres. Andrew Watts, alone, at the very top, the chorus in darkened space below. In the centre, five key figures whose "ground" is perspex, and transparent, as if they're in suspended animation.  The figures are symbolic of Everyman, so there's no great need for in-depth characterization. It's enough for us to know that the Realtor (Clare Presland) has to divide her time between being a mother and an executive, and that the Younger Man  (William Morgan) is scared of heights: we feel for them as human beings.  The closest we get to conventional aria is when The Young Woman (Rhian Lois) sings of love. It's a wonderful vignette, celebrating lesbian choice -  good for librettist Nick Drake and Davies!  Eric Greene sings the Janitor, a role that sits more easily in range, Phillip Rhodes sings the Older Man, a relatively conventional figure.  Susan Bickley sings The Mother. Deborah Warner directed, Michael Levine designed the set, which underlined the fragility of being "between worlds".

Special mention should be made of the dance sequence towards the end, choreographed by Kim Brandstrup. A man's body floats helplessly suspended, supported gently by a sylph-like female dancer, in a kind of reverse pas de deux.  The image suggests vulnerability, as well as gentleness. Eventually the male figure flies upwards, finding release. The music behind this sequence is beautiful, expressing deep meaning without the use of words. What was striking about 9/11 was that those killed sent messages of love, not hate or revenge, but that, alas, has been lost in transmission in our more divided, violent times.

Between Worlds is so unusual that's it's bound to shake up some. It might take time to settle, I think it proves how much creativity and talent there is in Britain, and why it should be supported. The ENO is in a unique position because it supports original work in the English language, and does so with a quirky liveliness that appeals beyond the narrow confines that give opera  a false elitist image.Scrapping the ENO in favour of small-town runs of, say, The Barber of Seville, just doesn't make sense, long term. The ENO's contribution to British art cannot simply be measured in accountant-speak.