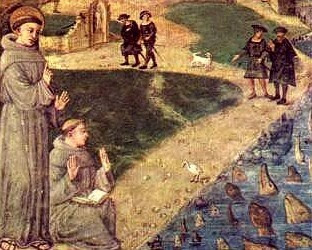 Is Mahler's song,  Des Antonius von Padua Fischpredigt,  from Des Knaben Wunderhorn,  meant to be funny ?  On the surface, it's droll, but as with so much good art, it's not a good idea to judge by surface appearances.  Saint Anthony of  Padua, a contemporary of St Francis of Assisi who preached to birds, was a famous orator, with phenomenal abilities to convert the heathen. In the poem from Des Knaben Wunderhorn, collected by Brentano and  von Arnim, the saint arrives at an empty church. So he goes down to the river and preaches to fish instead.  The fish leap and glisten, with excitement.  "Kein Predigt niemalen, den Karpfen so g'fallen"  Nothing like a juicy sermon, even if you can't speak.Latin.  Each verse describes a different type of fish, crabs and turtles, which wouldn't happen in nature.The stylized strophic refrains are a further clue that this isn't reality.

To the devout, it's a kind of miracle, taken seriously. But, as so often, literalism is the enemy of art. Whoever crafted the poem subverts the pious image.  The minute the saint turns his back, the fish are back to their own ways.  "Spitzgoschete Hechte, die immerzu fechten" remain quarrelsome thieves. Note , too, the greedy carp, whose mouths are always open, swallowing anything they're fed,  A pointed warning for our  times when received wisdom replaces thought. .

Mahler's setting of the poem reflects its mischief.  The markings indicate "with humour" on the piano part , its rolling rhythms suggesting that the saint's been too free with communion wine, although from what we know of the early Franciscan order, they were ascetic, not given to indulgence. It's a sly reference to Dionysius, a figure who pops up elsewhere in Mahler's work, specifically in Symphony no 3.  This humour is deceptive. "This piece is really as if nature were pulling faces and sticking its tongue out at you" (said Mahler)  "But it contains such a spine-chilling panic-like humour that one is overcome more by dismay than laughter".

War, loss and death are recurring themes in the Wunderhorn saga. Thomas Hampson has called some of them "negative love songs" for they are neither optimistic nor sentimental. The regimentation of military life contrasts with individual freedom,  though these brief escapes through love and imagination are doomed. In death. troops of skeletons march through streets, and lovers meet, as ghosts. Des Antonius von Padua Fischpredigt isn't funny. It's a wail of despair, though the wit dulls the pain.

Think ahead to Wozzeck, where the anti-hero tries to do his best, but is destroyed by the cycle of madness around him. Can we hear in the cyclic traverses of Wozzeck, echoes of the marches in Des Knaben Wunderhorn and the repetitions in Des Antonius von Padua Fischpredigt ? Maybe, maybe not, but that should start you thinking. DKW and Georg Büchner's Woyzeck come from a similar vein in the Romantic Imagination.

Furthermore, consider Des Antonius von Padua Fischpredigt in the context of Mahler's Symphony no 2. The long first movement may represent a funeral march, taken at a steady processional pace. From that the Ländler breezes serve a a Ruckblick on  a happy past, which will inevitably be left behind. In the third movement,  marked "In ruhig fließender Bewegung" come the references to the world of Des Knaben Wunderhorn.  The departed may be dead, physically, but Nature is working its miracles. The "Fischpredigt" passage begins with a  bang, the quirky woodwind melody leaping energetically, the strings surging with energized power.  The sermon is over, but that's not a negative thing. Now, we can move forward.  The music moves like the fish, disciples of the power of Nature to regenerate itself. Even at this point, we can think of Der Abschied, "Ewig, ewig.....".  In this context, the Des Antonius von Padua Fischpredigt represent transformational change, as well as the wilfulness of fish who don't change their ways.

Hence the danger of interpreting this song too narrowly and too literally. Please also read my article "Why greedy kids in Mahler 4"  Understand and absorb the spirit of Des Knaben Wunderhorn : it's a key into Mahler's inner world.
.
at April 17, 2015