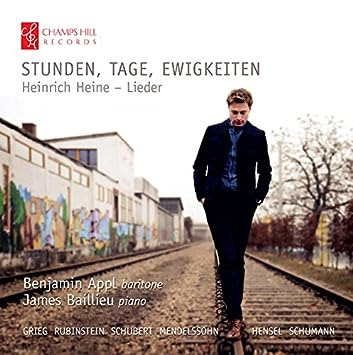 First solo recording from Benjamin Appl is now out. In fifty years of listening  to Lieder, I've  followed many singers right from the start of their careers, including Holzmair, Goerne, and Boesch. Talent doesn't always equate with fame, alas, but if Appl is lucky, he could be in that league.

"Stunden, Tage, Ewigkeiten sind es, die wie Schnecken gleiten ". The title  comes from Heinrich Heine,  Read the whole poem HERE for it encapsulates Heine and much of the Romantik spirit. This recording explores different settings of Heine, culminating in the immortal Schumann Dichterliebe Op 48. Everyone loves Dichterliebe, but even if you've heard 1000 Dichterliebes, this one is worth checking out.   Appl's voice is still very youthful, which in itself is refreshing,, imparting a vernal freshness which enhances the images of   Spring, flowers and abundant growth.  When inevitably, the images end in heartbreak, the pain feels palpable. A young man hasn't yet (and shouldn't) become inured to the cruelty of  the human condition  Heine is ironic, but irony is born from faith not cynicism.

The variety in the songs that make up this cycle also reveal a singer's versatility. Appl's voice has great range and flexibility. matched with purity of tone. He flies through the tongue-twisting Die Rose, die Lilie, die Taube, die Sonne, then breathes warmth into Wenn ich in deine \Augen seh.  In Ich grolle nicht, there are hints of how Appl's voice might develop with maturity:his Ich hab' in Traum geweinet.  suggested how his tone might mellow. There's a lot going for this voice, so I hope Appl will keep developing and not take the beauty of his timbre for granted.  That might mean taking risks, vocally and emotionally.  At his Wigmore Hall recital in January, I and some others felt he might be holding back, since anyone might feel in awe of a place so hallowed in Lieder tradition.  But I think Appl has what it takes. Hopefully, he's enough of an artist not to slip into a crowd-pleasing comfort zone.

Appl's choice of repertoire also suggests an independent mind with a feel for repertoire. Another singer I greatly admire said, "You need to know  background". It's not enough to just sing.   On this disc, he sings famous Schubert Heine settings like Der Atlas and Die Stadt, but also less well known  pieces like Anton Rubinstein's Sechs Lieder von Heine Op 32 (1907). Though fairly straightforward, these are charming. Der Asra  sets, one of Heine's many excursions into exotic alien  climes. A Sultan's daughter notices a slave by a fountain, who's wasting away. "Ich heiße Mahomet. Ich bin aus Yemen" His tribe are the Asra, who die when they love. Wilhelm Killmayer's setting of this poem emphasizes the anguish. Rubinstein decorates it with "Arabic" figures.

Appl and pianist James Baillieu also include a set of Mendelssohn songs, which juxtapose Fanny's settings with Felix's. It would be hard to top Felix's Neue Liebe and Auf Flügeln des Gesanges  but Fanny's Schwandenlied and Warum sind denn die Rosen so blass are accomplished, reflecting her experience as a pianist. They're only Opus 1 because she didn't get published til near  the end of her life.  Special praise, too, for James Baillieu, one of the most interesting of the younger generation of accompanists.  Pianists are the unsung heroes of Lieder,  since they can make such a difference to a performance. Appl is a singer who doesn't need cossetting but benefits from being challenged by the  assertive, individualism of Baillieu's playing. This disc was recorded in July 2015 at Champs Hill.