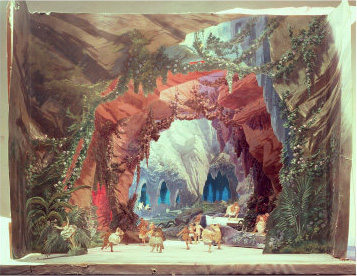 Above, a sketch of the Venusberg scene from a very early staging. It doesn't take much imagination to equate the caves and waters with anatomy: Venus's charms are made fairly explicit. Try that these days with prissier audiences and the fallout would be heard in Hell.  Thirty years ago, there was a German production in which dancers were seen as half-human, half-animal elementals writhing in agony and ecstasy. A brilliant way to express what Venusberg means, and why it has such a hold over our hero Tannhäuser.  Horrible as it is, it's less repressed than self-conscious Wartburg.  Visual images offer clues as to meaning: mistake them for literal reality and miss the art. Please read my analysis here of the symbolism of Wartburg and its place in German culture.  Also, my piece Who is Elisabeth.


Tannhäuser is Wagner and Wagner does ideas.  This is an opera about art and the role of art, every bit as much as Die Meistersinger von Nürnberg.  Both operas depict  societies where art is taken so seriously that the fate of a woman can be traded for talent.  Fortunately, in both cases, wise souls prevail.  Elisabeth is as selfless as Hans Sachs, and intuits that Tannhäuser must face his demons if he is to find himself.  Wolfram is the Perfect Knight, but Elisabeth wants other feelings. "Doch welch ein seltsam neues Leben, rief Euer Lied mir in die Brust! Bald wollt es mich wie Schmerz durchbeben, bald drang's in mich wie jähe Lust;Gefühle, die ich nie empfunden,Verlangen, das ich nie gekannt!"   If modern audiences want theatre sanitised, safe and bland , maybe they shouldn't be going to opera at all.

Peter Seiffert has been singing Tannhäuser for so long that he has form. I don't think think this is a "young man's role" like Walter von Stolzing, for Tannhäuser has seen the world outside Wartburg and cannot go back.  Johan Botha, who sang the part in 2010 was ideal, because he looked as though he'd tasted the joys of the flesh. What mattered was that his voice was pure, clear and agile. That's what the opera means, the integrity of art as opposed to surface beauty.   In 2010, Christian Gerhaher sang Wolfram so luminously that some who should know better thought that Elisabeth chose the wrong guy.  But Wolfram sings about evening stars, and intangibles. Detachment is his thing, not gritty human emotion. Wolfram was Gerhaher's breakthrough, his career-defining moment. I had been listening to him as a Lieder singer from very early on indeed, so his Wolfram didn't surprise me.  He's a consummate Wolfram in so many ways.
at April 27, 2016