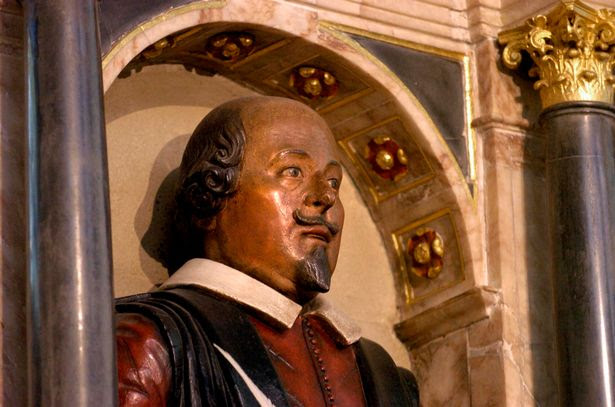 Shakespeare Lives! The BBC Shakespeare 400 celebrations are called "Shakespeare Lives!" for a good reason, demonstrated by this concert broadcast from the Church of the Holy Trinity in Stratford-upon-Avon, where Shakespeare was baptised and where he is buried.  There'll be plenty of plays, operas and discussions this year, but this concert captures  the spirit of creativity the Bard symbolizes,  Shakespeare lives, as long as  we care enough to keep his ideas fresh.

First, something few will ever have heard before: The Garrick Ode. This was David Garrick's tribute to the playwright. He'd built his career doing the plays in London, so the Ode was a tribute to the playwright himself.  The Ode helped establish the cult of Shakespeare as icon. Garrick's words are flamboyant  : "Shakespeare, Shakespeare, Shakespeare....the God of Our Idolatory".  Watching Samuel West, dressed as Garrick, declaim his lines reminds you how 18th century text highlighted phrases in upper case with melodramatic flourish. Garrick, a man of the theatre, the ultimate salesman. This isn't naturalistic acting, but showmanship.  Watch the video of the concert here, but be warned, you have to fast forward to 15.01min)  The singers and musicians wear black Tudor gowns, but the spirit of theatre reigns paramount   If violinist Emilia Benjamin's white ruff looks cheerfully aware, it's a reminder that once, nice women wouldn't have been able to perform in public.  Jeffrey Skidmore conducts the singers of Ex Cathedra and a trio of harpsichord, viol and violin.  Thomas Arne wrote the original music, some of which is lost. Sally Beamish filled the gaps so the piece can come to performance.  Reconstructed from fragments by Adrian Howard, The Ode lives again!

Just as Garrick created his own, original Ode for his times, Sally Beamish creates A Shakespeare Masque that adapts Shakespearean form to modern times.  She uses a "broken consort", an ensemble often used in early English music, combining different families of instruments. In this case, a duo of viols and recorder/flute with a trio of lutes (lute, cittern and bandora) with extra percussion instruments.  Some of Shakespeare's texts are used, but so are poems by Poet Laureate Carol Ann Duffy. The result is a  lively blend of ancient and modern.  Jeffrey Skidmore conducts the City Musick. The adult singers of Ex Cathedra are joined by their own  children's choir and by local schoolchildren whose  voices evoke freshness and youth. And humour too. The children sing "Etcetera, etcetara" then "William ! William !" as if he were one of their own  Very muchn the purity of "I know a bank where the wild thyme grows". Some of these children are so young that their eyes shine in wonder.

Masques were theatre, combining movement with music. Each tableaux is defined by movement : choristers marching in procession, accompanied by percussion instruments, the clapping of hands and rhythmic gesture.  The children bounce up and down to the music: a wonderfully primeval response, which connects music to its roots.  The whole performance space is used, art integrated into normal life.  The references to Stratford-upon-Avon integrate Shakespeare's semi-rural  origins with the destiny he found in London, and Shakespeare's journey from England into world culture.  Beamish's Masque ends with a glorious coda on recorder.  An early music instrument reborn in modern music. Shakespeare lives!

Ex Cathedra is taking this programme on tour : Birmingham on Sunday, then Hereford Cathedral, Wolverhampton, Southwell Minster and Milton Court at the Barbican in London on May 12.