With the Panama Papers and Brexit hanging upon us, consider Thomas Hardy's poem The Sergeant's Song and its setting  Rollicum-rorum, by Gerald Finzi.  Nothing like belligerent jingoism to distract attention from dishonesty and the abuse of power at home. Blaming  "foreigners" is a strategy that fools the populace all the time. 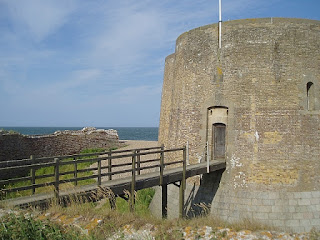 Napoleon's plans to invade England may or may not have come off, but fractious Whigs and Tories united behind the Hanoverian monarchy in a show of strength against  France, that ancient enemy. Not all that long before, it was the English who invaded France. So there we go! All along the coast of southern England, Martello towers were erected to spot ships at sea. At Aldeburgh today the Martello still stands, so solid that it might withstand nuclear attack. The enemy never materialized. But what cause for jingoist bluster! One hundred years later, when Europe was once again tooling up for war, Hardy wrote The Sergeant's Song implying that ordinary Wessex worthies weren't fooled.  Gerald Finzi, ever a pacifist, set the text as a jaunty romp, so the nonsense refrain Rollicum-rorum sounds dementedly manic. The best recording is by Roderick Williams, who captures the satirical punchline.