Choral songs from Shakespeare in a concert by the West Deutsche Rundfunk Radio Chorus, Cologne; conducted by Stefan Parkman, pictured above in front of the Cathedral on BBC Radio 3's "Shakespeare in Sound" series. Programmes like this are fascinating because they offer new perspectives on settings of Shakespeare. Much more fun than run-of-the-mill things we can hear anytime, anywhere, and lots better than some of the other stuff on offer so far.  Lively vocal ensembles do interesting things, because they're more individualist and independent than bigger,  less-flexible ensembles.

Like Jaako Mäntyjärvi (b 1963) Four Shakespeare Songs, from 1984. We hear only one here, Bubble Bubble Toil and Trouble.but we can hear why Mäntyjärvi has been a favorite in choral circles for a long time. The music "bubbles". The Three Witches are depicted in three blocks of voices. The low male voices keep the rhythmic line, while higher voices take off, rising like steam, then dissipating  in smokey sighs. Cackling good fun to sing.  Not included here is Mäntyjärvi's Full Fathom Five where the music flows across the different voices, blending them subtly, suggesting mysterious, submerged depths.  It's very different to Ralph Vaughan Williams's version in his Three Shakespeare songs for choir, where the "bells" toll  right from the start, as omnipresent as the "bells that ring on Bredon".  True artists find their own original voices. 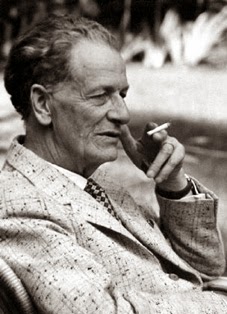 Frank Martin's Five Ariel Songs  (1950) connect to Martin's opera Der Sturm, based on The Tempest, completed soon after. The tonal colour in Come unto these yellow sands blends and reshapes – synaesthetes, who process music visually, will be in raptures. Out of this the watchdog's bark "bow wow" rises almost like descant.  Martin's Full fathom five is graphic. The undulations of the female voices evoke an image of seaweed swaying in the depths, while the men's voices follow a more direct rhythm, lovely backed by the women singing in half tones. On the words "sea change" the music itself undergoes a change "into something rich and strange". The "ding dong" refrain is understated, for the beauty of this song lies in its polychromatic undulations. In contrast, "You are three men of sin" brings all the voices together. The part singing here is very tight, even the silences precise. The choir intones "Remember, remember" before the alto takes up the melody.  Inherently dramatic. More contrast, too, in Where the bee sucks, where the quick changes of tempo suggest fleet-footed lightness.

The WDR Chorus and Parkman continue with five sets of unusual settings of Shakespeare; Four Fancies from Sven-Eric Johanssen (1919-1997) : Wake me up from my bed of Dreams, Under the Greenwood Tree,  Blow, blow Thou Winter Wind and O Mistress Mine.  The acompaniment reveals their origins in piano song. Nils Lindberg (b 1933) Shall I Compare Thee to a Summer's Day, Coloured Snakes, Lullaby, and The Whole World is a Stage,   Conductor Stefan Parkman's younger brother Håkan, who died aged only 33, was a composer. His Clown Song from Twelth Night shows great promise.  Why is my soul so barren of new Pride? , Alfred Janson (b 1937) Sonnet 46.  is interesting. The male soloist asks the question over and over, while the chorus at first hums (in German) and then sings in English. The answer seems to come when the female voice appears, "Telling what is told". The setting is call and response, as if the sonnet were part of a religious ceremony.  The concert ends with Carl Michael Bergerheim's settings of Sonnets 8 and 60, with beautiful piano accompaniment.


The songs are introduced with readings from Shakespeare translated into German, delivered intelligently: a treat for English speakers who don't hear the translations too often, though some of these translations inspired some very great works.  There's another programme in this series, from Barcelona last year, where the readings are in Catalan.  This also features choral settings, some unknown in this country.  Jonathan Swain's late night programmes often provide hidden treasures.
at April 25, 2016