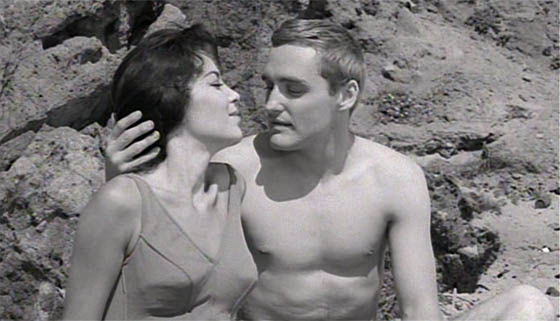 Night Tide (1961) a Hollywood B movie so beautifully made, so quirky and so original it should be recognized as art. It stars Dennis Hopper , then only 24, as Johnny, a sailor who comes from land-locked Denver, Colorado. Fascinated by the sights and sounds of Venice Beach with its carnival attractions. Enticed by exotic music, he wanders into a jazz club. Pay attention to the  music. It weaves serpent-like throughout the film and is a way above average film score. Composer is David Raskin.The director was Curtis Harrington. 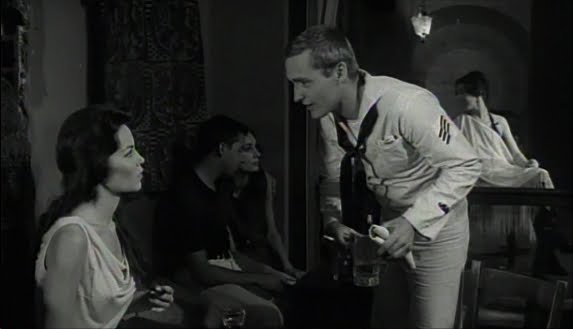 Johnny sees an exotic woman, so elegant she seems to come from another  world.  She's terrified when a strange woman comes in and addresses her.  It's all Greek to  Johnny, but he follows her because she's so upset. She's called Mora, and she lives in a tower, looking out to sea, over a merry-go-round. "I'm a mermaid" she says, "Half woman and half fish". She sits in a tank of water and people pay 25 cents to look at her. "It's very relaxing". She came from the island of Mykonos, adopted by a sea captain, who is way too Oxbridge to have been a career seaman, but has washed up in Venice Beach ("nothing like the real Venice, of course")  At a night party on the beach, Mora dances to hypnotic bongo drums, faster and faster til she falls in a faint. Johnny spots the Greek woman in the distance.  A bizarre English fortune teller and a wholesome American girl warn Johnny that there's something dangerous about Mora.

A wonderfully-filmed sequence of angles and strange planes, where Johnny runs under freeway bridges and derelict buildings, following the Greek woman who disappears outside the sea captain's house. Captain Murdock tells Johnny about the Sirens, who lure men to their deaths.  Not legends. . "There are things in this world you'll never believe!"  At last, Mora acknowledges the mystery woman. "She's one of Them, she's coming to take me back" The fortune teller, like Captain Murdock, has a bizarre past,{ but is or the scriptwriter was)  transformation, vortices, danger. "Is that good or bad?" says down to earth Johnny. 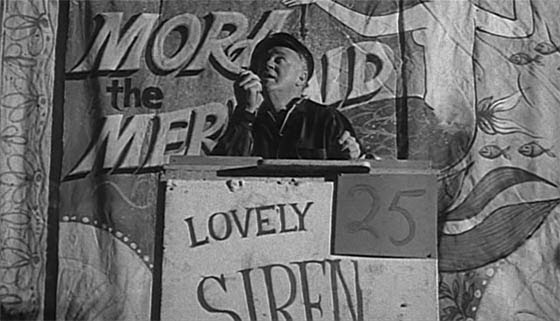 Back in his rooming house, Johnny thinks he's embracing Mora but she disappears. He sees wet footprints running from the bathtub, down the stairs, and follows them to the beach. Another well filmed sequence , shot under the pier: Johnny rescuers Mora from the water.  Next we see her in bed, but where was Johnny all night? Mora tells him to go get a massage, which is a very strange thing to say if they'd spent the night together in the usual way.  The masseur is one of the jazz musicians. Captain Murdock's there, too.

This is no ordinary massage. "You all tied up in knots" says the masseur. "Girlfriend not treating you right?" Are there deeper meanings in the film? The conversation between the masseur and the sea captain is full of innuendo, so explicitly homosexual that the scene was cut from initial release. The camera has lingered lovingly on Dennis Hopper's body, in tight Navv pants and naked, so many times that it's pretty clear that there's another narrative behind the main plot. hence the jazz band and dangerous (for 1961) interracial and unmentioned other subcultures, but an overwhelming fear of women.   Unsurprisingly, the movie was released as downmarket schlock horror. Mainstream audiences wouldn't get the subtext. Needless to say, the film was produced by a small independent company, not a big studio.

Mora calls Johnny into the sea. He dives underwater and nearly drowns. Where's Moira?  He next sees her on the rocks, with a fishtail instead of legs.  In reality, or what passes for it, he reads a newspaper which has a story about Mora the Mermaid. She and the Captain have been doing their act for 20 years, but she still looks the same as she did then. 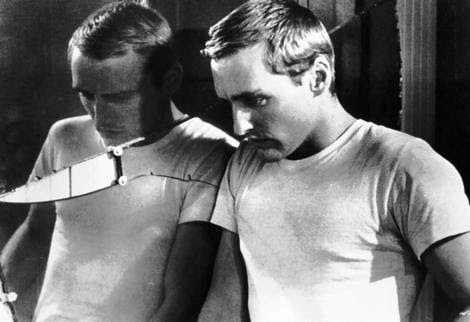 Yet another brilliantly filmed sequence as Johnny walks throughb the fairground, the carvings on the attractions lit up as if the were gargoyles come alive. Lightning flashes, waves crash. Then Johnny sees Mora, floating, apparently dead......  But how did she die, ad who killed her? Captain Murdock tells the police that he'd brought Mora up to think she was a Siren, so she couldn't have relations with men.  He says he killed her previous boyfriends, so they couldn't take her away, and committed suicide rather than have Johnny die, too. The police think Mora was the killer and that the Captain was trying to protect her. "But what about the mystery woman?" asks Johnny. " It was true. !It wasn't m imagination".  When Johnny leaves, the nice wholesome girl asks if he'll be back. "Merry-go-round", he says. Mora lived above the merry-go-round. in ever sense. As the shore patrol take Johnny back to base, it's pouring with rain outside. Not quite "Sunny California".

If you like this post, please read : George Antheil : Daughter of Horror
and Zemlinsky Die Seejungfrau
at April 11, 2016

Nice Article This is very useful thanks for sharing to us