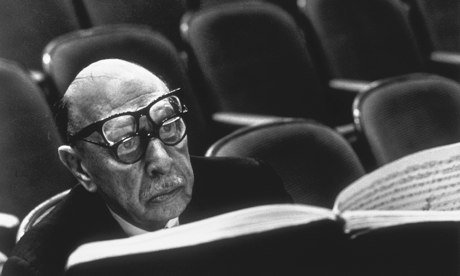 Thank goodness Esa-Pekka Salonen and the Philharmonia have chosen musical intelligence over bland routine in their Stravinsky series "Myths and Rituals". In "Faith", this third concert in the series, at St John's Smith Square, Salonen chose a programme of relative rarities from Stravinsky's late years.  Much is often made of Stravinsky's conversion to serialism, but this is a red herring. Music is not made through systems  In any case, this was an era in which the very idea of systems was being challenged by different and experimental styles.  Salonen dispenses with received opinion and refocuses on the music itself.  In this way, he demonstrates how late Stravinsky connects to early Stravinsky, to the sounds he would have absorbed as a child in the Russian Orthodox church.  Just as he re-invented primeval ritual in The Rite of Spring and Oedipus Rex, Stravinsky returned to something fundamental in his psyche. Far from being isolated,  Stravinsky was creatively re-inventing ritual much in the way Messiaen was doing in France at much the same time. An intriguing  re-assessment of Stravinsky's true genius. When Stravinsky and Boulez met, they got on well. Robert Craft wasn't happy. Perhaps the time is now ripe for a reappraisal of Stravinsky's late work in the context of his own past and in the wider European context from which he came.

The Requiem Canticles (1966) follow the form of a Catholic Requiem mass, but don''t expect clouds of perfumed incense. Instead sharp chords, crashes of timpani. Trumpets blare and the bass (the superb David Soar) intones.  Flutes and brass are supported by xylophone, vibraphone and tubular bells - a combination fairly typical of music of this period.  From this otherworldly mystery, rises the  mezzo Hélène Hébrard. Astringent austerity, far more sincere than conventional sentimentality.

Then, Introitus in memoriam T S Eliot (1965). Low mournful rumbles, a steady processional pace, segueing into In memoriam Dylan Thomas (1954) where the tenor (Allan Clayton) is haloed by the choir (The Philharmonia Voices). Then a dirge for trombones and strings, winds and brasses, before the tenor reappears, singing short eloquent phrases.  Two short pieces, which fit together well, like epigrams.  In contrast, Mass (1944-48) much larger but not necessarily as coherent.  The choirs sing the words "Kyrie Eleison"  and "Miserere" against an unadorned background, . Bell-like sonority in the voices. David Soar's voice rings out with priest-like  authority, and the "Sanctus"  (Allan Clayton) sounded like public prayer  The piece sounds "Stravinskian", which is fair enough,  but it's a Mass observed from outside, rather than felt from within.  For Stravinsky faith seemed to mean mystery and ritual, as opposed to theology.  It's place in this programme served to highlight the more genuine faith of the  Requiem Canticles  and the vibrant originality they represent.

In contrast, Stravinsky's Elegy for JFK (1964), for solo voice and four clarinets,  is far more effective.  Its haiku-like economy of expression  makes the piece poignant, without artifice or maudlin excess.  Perhaps it's too personal and intense for big performance spaces, though it works fine at St John's Smith Square with its unfussy architectural elegance. Cantata (1951/2) is more public performance friendly.  The vocal line is clear and easy to follow, the tenor part largely unadorned as are the sections for female chorus  Later, the tenor, mezzo, chorus and orchestra combine in odd mock polyphony. "Christ ! Christ is my Lord!" .The seven sections describe the journey from death to afterlife. The texts are in early English,  just obscure enough to stylize form from direct meaning. Rather like Oedipus Rex sung in Latin. Or a Mass, for that matter.  Stravinsky and Benjamin Britten have much in common, and not just W H Auden.

This Salonen Stravinsky series is so much more rewarding than yet another bland traverse of the famous blockbusters.  Salonen and the Philharmonia treat audiences like grown ups who can think for themselves and don't need spoonfeeding.  Long may they stand for artistic integrity! Please also see my review of the concert "Tales" (Les Noces, Renatrd and Mavra) HERE.