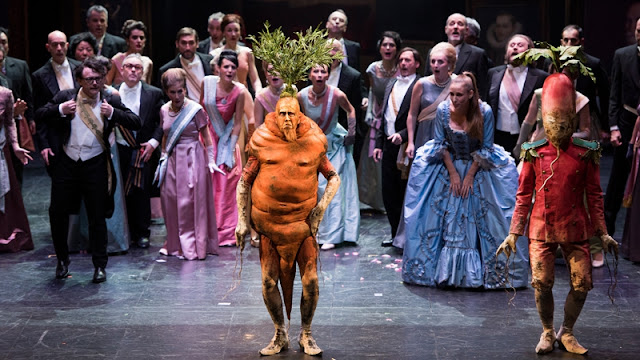 At the International Opera Awards this spring, Jacques Offenbach Le roi Carotte. and deservedly so. What a discovery!  Le roi Carotte is a wildly anarchic satire, whose message is only too relevant now, in our era of "post-truth" politics where demagogues and their followers think winning is everything. The production was a sensation at its premiere at the Opéra National de Lyon on 12 December 2015. It was broadcast on France Musique, French and German TV, the BBC, and elsewhere but in the UK it seems have have raised nary a ripple of interest.  Judging by the incomprehension with which Chabrier's L’Étoile was received in London this February (read more here) maybe one could conclude that London audiences don't get opéra bouffe, or they'd have realized that King Ouf's very name springs from the word "bouffe". In other words, puffed up, wicked, lively, as delicious as whipped creme.

Offenbach's original, first heard in 1872, was an over the top extravaganza of 22 scenes, singing, dancing, music and comedy sketches, lasting more than six hours, which definitely wouldn't go down well with modern audiences.  Bouffe and operetta aren't quite the same thing. This new edition was prepared by Laurent Pelly, a man of the theatre who knows the genre extremely well, and indeed specializes in French theatre and opera. Remember his Ravel  L'enfant et les sortilèges at Glyndebourne?  Read an interview with Pelly here.  Pelly has directed a lot of Offenbach : La belle Hélène  Les conte's d'Hoffmann (twice) , La Périchole and La Duchesse de Gérolstein.

Le roi Carotte is magnificent on its own terms, but a bit of background doesn't hurt. The Overture, for example, though it's pure Offenbach, has the panache of the military choruses in Gounod's Faust. This may be no accident, since going to war meant less to Goethe than it did to Gounod whose audiences gloried in Napoleon III and victories in the Crimea. When Le roi Carotte premiered, the irony would not have been lost on Offenbach's audiences, who only the previous year had witnessed the Prussian invasion and the Paris Commune.  In Le roi Carotte, the drunken student chorus is even more prominent, complete with staccato riffs to which beer mugs can be rhythmically beaten. Hedonism rules! But "Don't knock it" sing the chorus : it can all evaporate in an instant.

Le roi Fridolin XXIV is broke and must marry Princess Cunégonde for her money.  There's a wonderful vignette, in which a crafty student, Robin-Lauron, plots to rip off Fridolin and his remaining assets (weapons).  Indeed, all the set pieces are full of character, sharply defined.  Robin-Lauron discovers Rosée-du-soir, princess of Moravia, who has been imprisoned for years by the witch Coloquinte  The pair sing a duet "Roule, petit boule" , so even if we don't have a clue why they're there, the scene is delightful.  The witch is tricked by greed into conjuring up Le roi Carotte.....

Back in the palace, Cunégonde meets the stuffy courtiers. But who should march in but Le roi Carotte and his vegetable minions.  The court is horrified: the orchestra playing strange sounds that could come from Berlioz.  But Coloquinte the witch "conducts" from above, and the court fall over in mindless adulation.  "A bas Fridolin!"  the chorus cries. The Carrot is King.  Fridolin calls on his forebears. Ghostly knights in armour march in, singing a parody of Gounod's Gloire immortelle de nos aïeux.  "How dare you invoke your ancestors", they scold, "roi sans vertu qui les bravais jadis".  Fridolin consults a magician, Kiribibi, who sings an aria about politics, Talleyrand and a fickle public.  Fridolin and his friends are magicked of to Pompeii, "la ville de la morte" . More spooky music, more references to Faust.  Like the hedonistic students, the citizens of Pompeii sing of bread and wine. Fridolin and his companions con the Pompeiians  by invoking railway trains!  I kid you not, this is in the score and libretto  Growling ostinato, high flutes suggesting wind, whistles and speed. "La locomotive, coursier infernale, encore captive, s'ébrante le signale". The railway symbolized progress : Berlioz and Heine wrote about them, too.  The music is so vivid that the staging doesn't need to show trains. Instead a depiction of Vesuvius is wheeled in, spouting smoke.  Like a locomotive.....

Meanwhile back in the palace le roi Carotte is besieged by sycophants and salesmen - from Persia no less - but being down to earth, he prefers soup to silks.  Fridolin and Cunégonde meet. "Moi! Toi?  haha haha " they duet, the orchestra laughing along.  Coloquinte appears and sends Fridolin, Robin-Lauron and Rosée-du-soir underground in puffs of smoke, the journey described by the orchestra, playing in darkness. Here, insects rule.  "Gloria nobis", they sing as they educate Fridolin and friends about their underworld. The bugs swarm upwards.  Coloquinte can't cope.  Le roi Carotte and his radish knights get sick.  "Ça,  Le Stratège ", to use bugs to weaken veg! Crops fail, prices rise and the populace in the market place revolt.  At last they call the king a carrot. Kiribibi stands astride a barricade of vegetable crates and sings of Liberty.  The people recognize the sounds of an approaching army.   Fridolin is restored. Le roi carotte doesn't go to the guillotine. He's shredded in a vegetable press.

An exceptional opera, an exceptional production and a very good cast, details here.  Chances are it will never come to the UK, but let's hope it will be appreciated on DVD.
at June 20, 2016